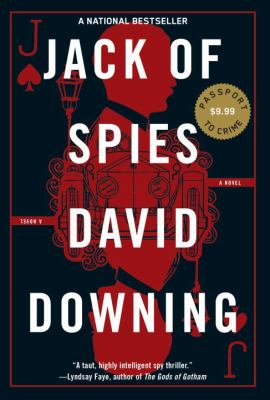 Genre/Form: Historical fiction. | Spy fiction. | Action and adventure fiction.DDC classification: 823.914 Summary: "Secretly working as a spy, Scottish car salesman Jack McColl seeks to prove himself on the eve of World War I only to encounter adversaries and a suffragette journalist whose family is embroiled in a movement Jack's bosses are fighting."-- Provided by publisher.
Tags from this library: No tags from this library for this title. Log in to add tags.
Fiction notes: Click to open in new window

Set on the eve of the First World War, across oceans and continents, steamliners and cross-country trains, David Downing's complex and thrilling new espionage novel takes us all the way back to the dawn of that most fascinating of 20th century characters--the spy.

It is 1913, and those who follow the news closely can see the world is teetering on the brink of war. Jack McColl, a Scottish car salesman with an uncanny ear for languages, has always hoped to make a job for himself as a spy. As his sales calls take him from city to great city--Hong Kong to Shanghai to San Francisco to New York--he moonlights collecting intelligence for His Majesty's Secret Service, but British espionage is in its infancy and Jack has nothing but a shoestring budget and the very tenuous protection of a boss in far-away London. He knows, though, that a geopolitical catastrophe is brewing, and now is both the moment to prove himself and the moment his country needs him most.

Unfortunately, this is also the moment he begins to realize what his aspiration might cost him. He understands his life is at stake when activities in China suddenly escalate from innocent data-gathering and casual strolls along German military concessions to arrest warrants and knife attacks. Meanwhile, a sharp, vivacious American suffragette journalist has wiled her way deep into his affections, and it is not long before he realizes that her Irish-American family might be embroiled in the Irish Republican movement Jack's bosses are fighting against. How can he choose between his country and the woman he loves? And would he even be able to make such a choice without losing both?

"Secretly working as a spy, Scottish car salesman Jack McColl seeks to prove himself on the eve of World War I only to encounter adversaries and a suffragette journalist whose family is embroiled in a movement Jack's bosses are fighting."-- Provided by publisher.

Known for his John -Russell espionage series set in World War II Berlin (Masaryk Station), Downing begins a new historical series featuring Scottish car salesman Jack -McColl. -McColl's affinity for languages and a job that takes him around the globe make it possible for him to covertly collect intelligence for His Majesty's Navy. It's 1913, and the world is on the brink of war, escalating McColl's spy duties and danger quotient. He makes his way from China to the United States and Mexico, then back to Europe as he chases German spies and their conspirators and falls in love with Caitlin Hanley, a spirited Irish American journalist, whose brother may be involved in a plot against the British. Now McColl will have to choose between love and country as he arrives in Ireland and tries to stop an explosive plan that could cost many lives. -VERDICT Fans of Downing's previous spy tales will not be disappointed with this excellent series launch that is full of rich historical and cultural details, revealed as his protagonist learns the espionage business on the eve of World War I. [Previewed in Editors' Spring Picks, LJ 2/15/13, p. 28.]-Melissa DeWild, Kent -District Lib., Comstock Park, MI (c) Copyright 2014. Library Journals LLC, a wholly owned subsidiary of Media Source, Inc. No redistribution permitted.

British author Downing's engaging if slow-moving first in a WWI-era spy series introduces Jack McColl, a globe-trotting Scottish car salesman moonlighting as a British agent. Months before August 1914, McColl is trying to sell his company's luxury car, the Maia, in China-and sniffing around for clues as to what the Germans and the Chinese are up to for his British government handlers back in London. He and Caitlin Hanley, a beautiful American journalist he meets in Peking, embark on a round-the-world journey that takes them to San Francisco and on to New York. Later, McColl heads to Mexico, and finally to Britain. Along the way, he survives a stabbing, falls in love, and tracks a German spy, gathering intelligence on a variety of revolutionary movements. Fans of Downing's WWII-era spy series that concluded with Masaryk Station will appreciate the author's command of history and period detail, though some may find the book reads more like a travelogue than a thriller. Agent: Charlie Viney, Viney Agency. (May) (c) Copyright PWxyz, LLC. All rights reserved.

With his celebrated John Russell series, which began between the wars and extended through WWII, behind him, Downing launches a new series about a different war. It's 1913, and tensions between England and Germany are escalating. Jack McColl is a luxury-car salesman whose travels take him around the world, offering plenty of opportunity to hear rumors and report back to the fledgling Royal Navy Intelligence Service. Spying is in its infancy, easily romanticized, and McColl is happy to see himself as a player in a global game in which men from various nations tested their wits against one another. From China to San Francisco to New York, McColl plays at espionage while finding time to fall for a radical newspaperwoman whose family may have ties to the IRA. Then the bodies start dropping, and the Great Game reveals itself as much more than matching wits. There's maybe a bit too much scene-setting in this opening salvo, but it's clear that the talented Downing is off and running once again, with an agreeable new hero and another richly atmospheric historical backdrop. HIGH-DEMAND BACKSTORY: Backed by a $150,000 marketing and ad budget and the author's first tour, Downing's series debut may also become his biggest seller yet.--Ott, Bill Copyright 2010 Booklist

A rookie spy gets in over his head when he's forced to choose between his assignment and the dynamic woman he's fallen for.It's 1913, and for the past few years, Scottish car dealer Jack McColl has folded small missions for the nascent British Intelligence Service into his overseas business trips. The income rarely covers more than travel expenses, but the work definitely makes his travels more interesting. Two new elements change the equation on his latest excursion from Tsingtau, China, to Shanghai to San Francisco and, ultimately, New York. Political tensions have been accelerated by the looming European war, making China far less safe, and McColl finds surprising romance with Caitlin Hanley, a vibrant young American journalist. They meet in Peking, and though McColl continues with his espionage commitments, he can't get her off his mind. When they meet again, they rekindle their affair, fueled by an ardor the time apart has triggered. But Cumming, the British naval officer who employs McColl, and Rainer von Schn, a German engineer with whom he trades information, are less than thrilled that he has Caitlin in tow. Her intrusive questions turn von Schn icy. In San Francisco, McColl is briefed by Jatish, an undercover agent who's later murdered. Could McColl himself have been the intended victim?This first installment of a proposed series by the author of the six John Russell novels (Masaryk Station, 2013, etc.) moves deliberately but colorfully, with intelligent prose and a strong period feel. Copyright Kirkus Reviews, used with permission.
More book reviews at iDreamBooks.com