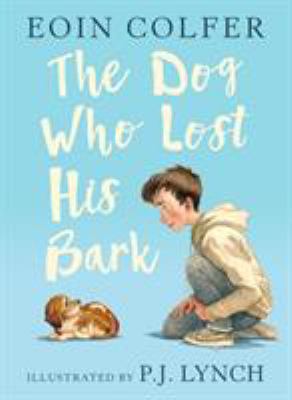 The dog who lost his bark / Eoin Colfer ; illustrated by P. J. Lynch.

DDC classification: 823.92 Summary: Patrick has been desperate for a dog of his own for as long as he can remember, and this summer, with his father away, he longs for a buddy more than ever. In his short doggy life, Oz has suffered at the hands of bad people. Somewhere out there, he believes, is an awesome boy - his boy. Maybe when they find each other he will learn to bark again.
Tags from this library: No tags from this library for this title. Log in to add tags.

A warm, uplifting story for young readers about a boy and his dog and the power of music to heal; a first-time collaboration from two Irish Children's Laureates.Patrick has been desperate for a dog of his own for a long as he can remember - and this summer, with his father away, he longs for a buddy more than ever. In his short doggy life, Oz has suffered at the hands of BAD PEOPLE. Somewhere out there, he believes, is an AWESOME BOY - his BOY. Maybe when they find each other he will learn to BARK again...

Patrick has been desperate for a dog of his own for as long as he can remember, and this summer, with his father away, he longs for a buddy more than ever. In his short doggy life, Oz has suffered at the hands of bad people. Somewhere out there, he believes, is an awesome boy - his boy. Maybe when they find each other he will learn to bark again.

In this story of friendship and belonging, a mistreated dog and a persistent boy forge a relationship based on kindness and patience. A nameless puppy lives in constant fear of punishment after being adopted from "the loud man" with the "sour smell" by a family whose child calls him "STUPIDDOG." Abandoned in a junkyard, the hound lands in a shelter; there, he meets Patrick, a boy who feels an instant connection with him. Patrick insists on bringing the dog home to his grandfather's house, where he's staying with his mother while his musician father is away on a worryingly long tour. Associating barking with "big trouble," the pup, now named Oz, is silent, but Patrick is determined to gain the his trust and free his voice. Colfer (the Artemis Fowl series) makes use of capital letters to incorporate Oz's point of view, and Lynch (Patrick and the President) contributes detailed black-and-white pencil drawings that convey the novel's emotional core through body language and facial expressions. Ultimately a story about connection and trust, this offering also communicates a clear and impactful message, at times through cruel and upsetting moments, about animal treatment and the responsibility of pet ownership. Ages 7--10. (Sept.)

Gr 2--4--Early traumas--being sold by an abusive man and then adopted and abandoned by a cruel family--have taught Dog to be wary of humans. To Dog, to bark is to risk punishment, starvation, and abandonment. When Patrick, a young boy heading toward impending parental separation, adopts Dog and names him Oz, he promises to do whatever it takes to help Oz find his bark again. Through the power of music and love, Oz does indeed find his voice. But can Oz do the same for his beloved Patrick when the boy learns the truth about his dad's absence? Alternating between dog and boy perspectives and always written in third person, this heartwarming story unfolds in short vignettes augmented by soft pencil illustrations. Oz's voice is easily distinguished by the use of all capitals to designate important people, actions, and things, such as the "LOUD MAN" and "OUTSIDE." Although this writing device is overused, it serves to communicate Oz's thoughts and feelings. Patrick's parents' separation is revealed gradually, allowing readers to empathize with his reaction when he learns the truth. The authentic portrayal of parents as flawed, yet loving, rings true. Frequent illustrations, ranging from spot art to full-page spreads, create a realistic, modern, yet nostalgic setting using shading and precise linework. Despite Oz's traumatic puppy years, the ending is appropriately happy for the target age range. VERDICT A cozy chapter book to read aloud to animal lovers, this story will find a place in most public and school libraries.--Amy Seto Forrester, Denver Public Library

Dog lives with his mother and siblings until Loud Man sells him. His next owners mistreat him, punish him for barking, and abandon him. Meanwhile, Patrick's mother tells him that his father won't be joining them at Grandad's home this summer and asks if he would like to have a dog. The boy realizes that something's up, but he's always wanted a dog. At the shelter, he chooses Dog, names him Oz, and devotes his summer to helping him learn to trust and to bark. Later, Mom reveals that Dad has left the family, and Patrick is distraught. Now it's Dog's turn to help his friend heal. As the third-person narrative shifts between the boy's point of view and his dog's, readers will find both compelling. Colfer and Lynch have served as Irish Children's Laureates. Lynch's softly shaded pencil drawings capture the characters' emotions and the story's tone beautifully. Best known for the Artemis Fowl series, Colfer offers a simply written, realistic tale with plenty of human interest. Dog-lovers will find the jacket illustration irresistible.--Carolyn Phelan Copyright 2010 Booklist

A boy and a puppy overcome difficult times in this illustrated chapter book.Beginning the tale from the puppy's point of view, Colfer employs simple language evoking an innocent sensibility, with many words in all-caps reflecting puppyish enthusiasm. The puppy's early days with his mother and siblings are followed by a heart-wrenching stint with the abusive couple who brings the puppy home as a present for their cruel boy. After the puppy is abandoned at the dump, Colfer switches the point of view to Patrick, a human boy, who is driving with his mother to his grandad's house to spend the summer. Asking when his touring-musician father will arrive, Patrick is dumbfounded when his mother, instead of answering the question, asks him if he would like to have a dog. Evading the issue of his father's allergies, Patrick's grandfather brings him to the shelter, where he picks out (readers will be so relieved) the abandoned puppy and names him Oz. Oz, however, is so traumatized he stays in his crate until, by accident, Patrick's grandfather discovers that Oz enjoys music. Patrick digs out his violin and plays for him, eventually gaining his trust. Just as all seems well, Patrick learns that his father is leaving his motherand now it is Oz's turn to rescue Patrick. Lynch's realistic pencil illustrations greatly amplify the story, their sensitively rendered human and dog expressions echoing the varying tones of the text. Humans are depicted as white.This quietly emotional tale is an ultimately triumphant one. (Fiction. 7-10) Copyright Kirkus Reviews, used with permission.
More book reviews at iDreamBooks.com