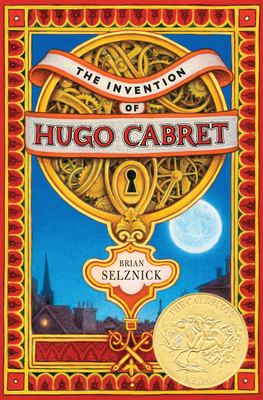 The invention of Hugo Cabret : a novel in words and pictures / by Brian Selznick.

DDC classification: 813.6 A Junior Library Guild selection.Summary: When twelve-year-old Hugo, an orphan living and repairing clocks within the walls of a Paris train station in 1931, meets a mysterious toyseller and his goddaughter, his undercover life and his biggest secret are jeopardized.
Tags from this library: No tags from this library for this title. Log in to add tags.
Fiction notes: Click to open in new window

Orphan, clock keeper and thief, Hugo lives in the walls of a busy Paris train station, where his survival depends on secrets and anonymity. But when his world suddenly interlocks with an eccentric, bookish girl and a bitter old man who runs a toy booth in the station, Hugo's undercover life, and his most precious secret, are put in jeopardy. A cryptic drawing, a treasured notebook, a stolen key, a mechanical man and a hidden message from Hugo's dead father form the backbone of this intricate, tender and spellbinding mystery.

When twelve-year-old Hugo, an orphan living and repairing clocks within the walls of a Paris train station in 1931, meets a mysterious toyseller and his goddaughter, his undercover life and his biggest secret are jeopardized.

Here is a true masterpiece-an artful blending of narrative, illustration and cinematic technique, for a story as tantalizing as it is touching. Twelve-year-old orphan Hugo lives in the walls of a Paris train station at the turn of the 20th century, where he tends to the clocks and filches what he needs to survive. Hugo's recently deceased father, a clockmaker, worked in a museum where he discovered an automaton: a human-like figure seated at a desk, pen in hand, as if ready to deliver a message. After his father showed Hugo the robot, the boy became just as obsessed with getting the automaton to function as his father had been, and the man gave his son one of the notebooks he used to record the automaton's inner workings. The plot grows as intricate as the robot's gears and mechanisms: Hugo's father dies in a fire at the museum; Hugo winds up living in the train station, which brings him together with a mysterious toymaker who runs a booth there, and the boy reclaims the automaton, to which the toymaker also has a connection. To Selznick's credit, the coincidences all feel carefully orchestrated; epiphany after epiphany occurs before the book comes to its sumptuous, glorious end. Selznick hints at the toymaker's hidden identity (inspired by an actual historical figure in the film industry, Georges Melies) through impressive use of meticulous charcoal drawings that grow or shrink against black backdrops, in pages-long sequences. They display the same item in increasingly tight focus or pan across scenes the way a camera might. The plot ultimately has much to do with the history of the movies, and Selznick's genius lies in his expert use of such a visual style to spotlight the role of this highly visual media. A standout achievement. Ages 9-12. (Mar.) (c) Copyright PWxyz, LLC. All rights reserved

Gr 4-9-With characteristic intelligence, exquisite images, and a breathtaking design, Selznick shatters conventions related to the art of bookmaking in this magical mystery set in 1930s Paris. He employs wordless sequential pictures and distinct pages of text to let the cinematic story unfold, and the artwork, rendered in pencil and bordered in black, contains elements of a flip book, a graphic novel, and film. It opens with a small square depicting a full moon centered on a black spread. As readers flip the pages, the image grows and the moon recedes. A boy on the run slips through a grate to take refuge inside the walls of a train station-home for this orphaned, apprentice clock keeper. As Hugo seeks to accomplish his mission, his life intersects with a cantankerous toyshop owner and a feisty girl who won't be ignored. Each character possesses secrets and something of great value to the other. With deft foreshadowing, sensitively wrought characters, and heart-pounding suspense, the author engineers the elements of his complex plot: speeding trains, clocks, footsteps, dreams, and movies-especially those by Georges Melies, the French pioneer of science-fiction cinema. Movie stills are cleverly interspersed. Selznick's art ranges from evocative, shadowy spreads of Parisian streets to penetrating character close-ups. Leaving much to ponder about loss, time, family, and the creative impulse, the book closes with a waning moon, a diminishing square, and informative credits. This is a masterful narrative that readers can literally manipulate.-Wendy Lukehart, Washington DC Public Library (c) Copyright 2010. Library Journals LLC, a wholly owned subsidiary of Media Source, Inc. No redistribution permitted.

\rtf1\ansi\deff0Selznick's novel in words and pictures, an intriguing mystery set in 1930s Paris about an orphan, a salvaged clockwork invention, and a celebrated filmmaker, resuscitates an anemic genre\emdash the illustrated novel\emdash and takes it to a whole new level. The result is somewhat similar to a graphic novel, but experiencing its mix of silvery pencil drawings and narrative interludes is ultimately more akin to watching a silent film. Indeed, movies and the wonder they inspire, like seeing dreams in the middle of the day, are central to the story, and Selznick expresses an obvious passion for cinema in ways both visual (successive pictures, set against black frames as if projected on a darkened screen, mimic slow zooms and dramatic cuts) and thematic (the convoluted plot involves director Georges M\'e9li\'e8s, particularly his fanciful 1902 masterpiece, A Trip to the Moon0 .) This hybrid creation, which also includes movie stills and archival photographs, is surprising and often lovely, but the orphan's story is overshadowed by the book's artistic and historical concerns (the heady extent of which are revealed in concluding notes about Selznick's inspirations, from the Lumi\'e8re brothers to Fran\'e7ois Truffaut). Nonetheless, bookmaking this ambitious demands and deserves attention\emdash which it will surely receive from children attracted by a novel in which a complex narrative is equally advanced by things both read and seen. --Jennifer Mattson Copyright 2007 Booklist

From Selznick's ever-generative mind comes a uniquely inventive story told in text, sequential art and period photographs and film. Orphaned Hugo survives secretly in a Parisian train station (circa 1930). Obsessed with reconstructing a broken automaton, Hugo is convinced that it will write a message from his father that will save his life. Caught stealing small mechanical repair parts from the station's toy shop, Hugo's life intersects with the elderly shop owner and his goddaughter, Isabelle. The children are drawn together in solving the linked mysteries of the automaton and the identity of the artist, illusionist and pioneer filmmaker, Georges Mli's, long believed dead. Discovering that Isabelle's godfather is Mli's, the two resurrect his films, his reputation and assure Hugo's future. Opening with cinematic immediacy, a series of drawings immerses readers in Hugo's mysterious world. Exquisitely chosen art sequences are sometimes stopped moments, sometimes moments of intense action and emotion. The book, an homage to early filmmakers as dreammakers, is elegantly designed to resemble the flickering experience of silent film melodramas. Fade to black and cue the applause! (notes, film credits) (Fiction. 9-12) Copyright ©Kirkus Reviews, used with permission.
More book reviews at iDreamBooks.com