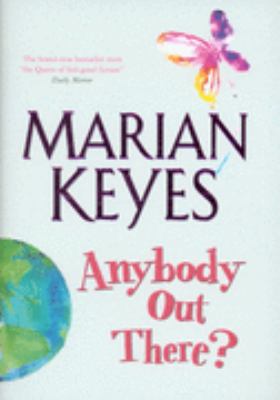 Anybody out there? / Marian Keyes.

DDC classification: 823.914 Subject: Anna Walsh is officially a wreck. Physically broken and emotionally shattered, she lies on her parents' Dublin sofa with only one thing on her mind - getting back to New York. New York means her best friends, the most fabulous job in the world, and, above all, it means her husband, Aidan. But nothing in Anna's life is that simple any more.
Tags from this library: No tags from this library for this title. Log in to add tags.
Fiction notes: Click to open in new window
Total holds: 0

Anna Walsh is officially a wreck. Physically broken and emotionally shattered, she lies on her parents' Dublin sofa with only one thing on her mind - getting back to New York. New York means her best friends, the most fabulous job in the world, and above all, it means her husband, Aidan.

Anna Walsh is officially a wreck. Physically broken and emotionally shattered, she lies on her parents' Dublin sofa with only one thing on her mind - getting back to New York. New York means her best friends, the most fabulous job in the world, and, above all, it means her husband, Aidan. But nothing in Anna's life is that simple any more.

Keyes returns to the Walsh family with humor and drama by focusing on fourth sister Anna who is recovering from a tragedy in Dublin under Mammy Walsh's care. Returning to her job in New York as a PR executive for Candy Girrrl cosmetics, Anna has a real desire to reconnect with her now strangely absent husband, Aidan, whether it's through phone calls, the Internet, support groups, psychics, mediums, or other paranormal activities. Keyes finds the right balance of pathos and wit by entwining Anna's plight with emails from mom and Helen in two minor subplots that strain believability but keep the book from turning maudlin as Anna's memory returns. Terry Donnelly provides the characters' dark wit very well. Recommended.-Joyce Kessel, Villa Maria Coll., Buffalo, NY (c) Copyright 2010. Library Journals LLC, a wholly owned subsidiary of Media Source, Inc. No redistribution permitted.

International bestseller Keyes is back with another quirky, heartwarming story of the Walsh sisters (Angels, etc.). Anna Walsh has returned to the bosom of her family in the Dublin suburbs to recuperate from the horrendous car accident that has left her with multiple fractures and a disfiguring scar across her face. Desperate to go back to New York and resume her normal life, she soon packs up her bags and returns to her job in beauty PR for punk cosmetics brand Candy Grrrl. A lonely and debilitated Anna leaves e-mails and phone messages for her mysteriously absent husband, Aidan, pleading for him to reply. Just as the reader is bursting with indignation that the cad hasn't contacted her (a quarter of the way into the novel), we learn that Aidan died in the car accident, and that Anna's missives are her way of dealing with grief. Desperate for contact, Anna tries charlatan psychics, celebrity mediums and contacting-the-dead support groups. Meanwhile, she reminisces about their courtship and marriage while her kooky family (especially her Mum and hyperactive PI sister Helen) tries to buoy her spirits. Keyes's trademark blend of humor, diverse characters and a warm but unsentimental tone strikes gold. (May 9) (c) Copyright PWxyz, LLC. All rights reserved

So tantalizing is the mystery behind Anna Walsh's multiple debilitating and disfiguring injuries, it would be criminal to explain why the self-proclaimed owner of the Best Job in the World (PR maven for Candy Grrrl cosmetics) has left her trendy New York life to recuperate in the good front room of her parents' Dublin cottage, since Keyes herself strings readers along until the end of part 1 before revealing the cause of Anna's broken bones and broken heart. Suffice it to say that readers will be as devastated as Anna is to learn what awaits her when she returns to America and begins the agonizing process of rebuilding her shattered life. Hardly sounds like the stuff of raucous humor, now does it? And yet Keyes' latest madcap escapade starring one of the five wacky Walsh sisters teems with moments of joyous hilarity and laugh-out-loud humor. Anna is the kind of gal every woman would want as her best friend, sister, or daughter. Plucky doesn't begin to describe her approach to life, and her journey of self-discovery can stand as a provocative lesson in how to cope with demoralizing crises. Keyes fans will embrace this as her best yet, and first-time Keyes readers will want to read everything she's written. --Carol Haggas Copyright 2006 Booklist

Keyes's proven formula for success--a chatty, engaging heroine, a bawdy sense of humor, an unhappy turn of events--works again in her eighth novel (The Other Side of the Story, 2004, etc.). Three of the five Irish Walsh girls have novels of their own, and now it's time for Anna's story. The first 100 pages build up a mystery of sorts: Anna lies dazed in the front parlor of her parent's Dublin home as her mother nurses her back to health. On her daily walk, the local schoolboys call her Frankenstein, and for good reason. With deep cuts and bandages on her face, fingers without nails, an arm cast and a limp, Anna has never looked less stylish (except when she wore all those hippie skirts). There are flashbacks to her recent life in New York, where she has The Best Job in the World in cosmetics public relations, and a hunky, adorable husband, Aidan. So what happened to Anna, and where's Aidan in her time of need? Against everyone's pleading, Anna returns to New York, and we learn the tragic truth: Anna and Aidan were in a car accident in which Aidan died. Now, Anna rings his cell phone everyday to hear his voicemail, she e-mails him about work, she wails at night and can't imagine life without him. Over 400 pages of a widow's emotional recovery would be hard-going if not for Keyes's humor and grand cast of characters with their own quirky subplots. Back in Dublin, baby sister Helen, an unlikely private investigator, keeps Anna updated on her current big case--tailing the local crime lords' misses, while Mammy Walsh keeps Anna current on her own little mystery--an old lady regularly brings her dog to poo on the Walsh's doorstep. And now, desperate to find out where Aidan is, Anna starts frequenting afterlife psychics, which introduces a whole new set of oddballs. Anna begins to crawl out of her sorrow, but Keyes is cautious with the expected happy ending--for all the comedy, she creates a vivid portrait of grief. The very best in chick-lit. Copyright ©Kirkus Reviews, used with permission.
More book reviews at iDreamBooks.com