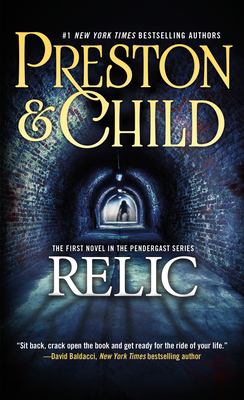 Genre/Form: Thrillers (Fiction) | Detective and mystery fiction.DDC classification: 813/.54 Summary: Relic, a Douglas Preston and Lincoln Child thriller that introduces FBI Special Agent Pendergast.Summary: Just days before a massive exhibition opens at the popular New York Museum of Natural History, visitors are being savagely murdered in the museum's dark hallways and secret rooms. Autopsies indicate that the killer cannot be human ...Summary: But the museum's directors plan to go ahead with a big bash to celebrate the new exhibition, in spite of the murders.Summary: Museum researcher Margo Green must find out who--or what--is doing the killing. But can she do it in time to stop the massacre?
Tags from this library: No tags from this library for this title. Log in to add tags.
Fiction notes: Click to open in new window

Relic: The #1 New York Times bestselling thriller by Douglas Preston's and Lincoln Child, with more than one million copies sold to date

Just days before a massive exhibition opens at the popular New York Museum of Natural History, visitors are being savagely murdered in the museum's dark hallways and secret rooms. Autopsies indicate that the killer cannot be human...

But the museum's directors plan to go ahead with a big bash to celebrate the new exhibition, in spite of the murders.

Museum researcher Margo Green must find out who--or what--is doing the killing. But can she do it in time to stop the massacre?

Just days before a massive exhibition opens at the popular New York Museum of Natural History, visitors are being savagely murdered in the museum's dark hallways and secret rooms. Autopsies indicate that the killer cannot be human ...

But the museum's directors plan to go ahead with a big bash to celebrate the new exhibition, in spite of the murders.

Museum researcher Margo Green must find out who--or what--is doing the killing. But can she do it in time to stop the massacre?

One suspects that Child, who has edited numerous ghost and horror anthologies (e.g., Dark Company, St. Martin's, 1984), read Dinosaurs in the Attic (LJ 10/15/86), Preston's wonderful history of the American Museum of Natural History, and decided the pair should collaborate on a horror novel in this wonderfully spooky setting. The heroes (an FBI agent and a journalist) and heroine (a spunky graduate student) wander through basements, sub-basements, and tunnels, searching for the savagely murderous predator inadvertently sent to the museum from the Amazon. Despite the headless bodies turning up all over, the museum director is determined to proceed with the lucrative opening ceremony for the new "Superstition" exhibit. Then the monster gets loose among New York's rich and powerful. This is a real page-turner, part Jaws, part Poseidon Adventure. Essential for horror collections.-Marylaine Block, St. Ambrose Univ. Lib., Davenport, Ia. (c) Copyright 2010. Library Journals LLC, a wholly owned subsidiary of Media Source, Inc. No redistribution permitted.

A monster on the loose in New York City's American Museum of Natural History provides the hook for this high-concept, high-energy thriller. A statue of the mad god Mbwun, a monstrous mix of man and reptile, was discovered by a Museum expedition to South America in 1987. Now, it is about to become part of the new Superstition Exhibition at the museum (here renamed the ``New York Museum of Natural History''). But as the exhibition's opening night approaches, the museum may have to be shut down due to a series of savage murders that seem to be the work of a maniac-or a living version of Mbwun. When the museum's director pulls strings to ensure that the gala affair takes place, it's up to a small band of believers, led by graduate student Margo Green, her controversial adviser and an FBI agent who investigated similar killings in New Orleans, to stop the monster-if the culprit is indeed a monster-from going on a rampage. Less horror then action-adventure, the narrative builds to a superbly exciting climax, and then offers a final twist to boot. With its close-up view of museum life and politics, plausible scientific background, sharply drawn characters and a plot line that's blissfully free of gratuitous romance, this well-crafted novel offers first-rate thrills and chills. Film rights optioned by Kennedy-Marshall Productions; audio rights to Brilliance Corp. (Jan.) (c) Copyright PWxyz, LLC. All rights reserved

YAThis electrifying thriller opens in an unexplored, mysterious corner of the Amazon basin. A Museum of Natural History expedition is seeking the legendary Kothoga tribe in quest of the vile secret it conceals. The thoroughly terrified tribes nearby infer that the Kothoga and their malicious ways are too awful to discuss with outsiders, except to issue dire warnings. The expedition dissolves, with most of its members opting out of the territory with alacrity, only to perish in a plane crash. Two zealous individuals who heedlessly press on into the jungle vanish, but not before making the horrifying discovery they sought. The crates of the lost expedition, however, arrive back in New York City intact, and are consigned to the basement for cataloging. The story picks up back at the museum where murders have begun to occur with dreadful frequency. Forensics reveal the death blows were delivered with unusual strength, the corpses were dismembered with savage violence, and the perpetrator has mighty unusual DNA patterns. The NYPD, the FBI, and enterprising museum research assistants join efforts to solve the grisly murders but are stonewalled by officials in the head office who plan a revenue-generating exhibition of Amazonian artifacts, recklessly ignoring the impending danger to staff and visitors alike. While the story line contains a bit too much of museum politics and logistics that don't quite mesh, the suspense is sure to please fans of Michael Crichton and Stephen King.Catherine Noonan, Fairfax County Public Library, VA (c) Copyright 2010. Library Journals LLC, a wholly owned subsidiary of Media Source, Inc. No redistribution permitted.

An eccentric, grisly, thoroughly original thriller sure to please doctoral candidates and gore junkies alike. The real star featured by Preston (Jennie, p. 1080, etc.) and former St. Martin's editor Child isn't the brain-eating, evolutionary aberration, quaintly dubbed the ``Museum Beast,'' that hunts victims in the subterranean catacombs of New York's Museum of Natural History: It's the museum itself. While the creature is never dull, thrill hounds couldn't ask for a creepier environment in which to encounter grad student Margo Green, journalist Bill Smithback, FBI Special Agent Pendergast, and a mob of bureaucrats, genetics geeks, and NYPD cops. On the eve of a heavily promoted megashow, the shredded bodies of two boys are discovered in the museum's basement. As the death toll mounts, Agent Pendergast, attempts to postpone the opening of an exhibit called Superstition. But he's vetoed by a publicity-conscious superior. Meanwhile, Green and Smithback combine forces to get the lowdown on some mysterious crates from a failed Amazon expedition that no one wants to talk about. It turns out that the ``Museum Beast'' is really a freak of nature, its DNA half-reptile and half-primate. It followed the crates to New York because they contained the last samples of its only food--when the supply ran out, the monster began snacking on nutritionally similar human brains. Fast, smart, and almost bulletproof, the beast also served as the central figure in the rituals of a vanished Amazon culture. If this all sounds wildly cool, it's nothing compared to the novel's final third, in which several groups of characters (including the mayor) are trapped in different parts of the museum and must fend off repeated attacks from the lizard-ape, which munches on SWAT teams and socialites before squaring off against Green and Pendergast. A thriller staged in the world's scariest building, with no room for the squeamish.
More book reviews at iDreamBooks.com