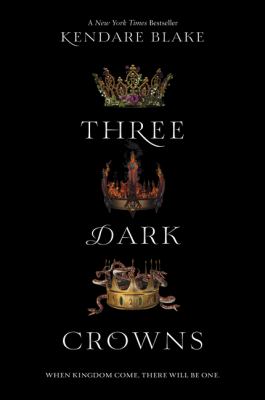 Summary: On the island of Fennbirn, triplet sisters who each wield a coveted magic skill and claim an equal right to the throne must fight to the death when they turn sixteen for the title of Queen Crowned.
Tags from this library: No tags from this library for this title. Log in to add tags.
Fiction notes: Click to open in new window
No physical items for this record

Fans of acclaimed author Kendare Blake's Anna Dressed in Blood will devour Three Dark Crowns, the first book in a dark and inventive fantasy series about three sisters who must fight to the death to become queen.

In every generation on the island of Fennbirn, a set of triplets is born: three queens, all equal heirs to the crown and each possessor of a coveted magic. Mirabella is a fierce elemental, able to spark hungry flames or vicious storms at the snap of her fingers. Katharine is a poisoner, one who can ingest the deadliest poisons without so much as a stomachache. Arsinoe, a naturalist, is said to have the ability to bloom the reddest rose and control the fiercest of lions.

But becoming the Queen Crowned isn't solely a matter of royal birth. Each sister has to fight for it. And it's not just a game of win or lose...it's life or death. The night the sisters turn sixteen, the battle begins. The last queen standing gets the crown.

On the island of Fennbirn, triplet sisters who each wield a coveted magic skill and claim an equal right to the throne must fight to the death when they turn sixteen for the title of Queen Crowned.

Triplet sisters raised to compete for the crown of Fennbirn have their own talents: Mirabella is a formidable elemental who can conjure and control storms, Katharine is being trained to withstand poison, and dark horse Arsinoe is a naturalist working to summon her animal familiar. In this series opener from Blake (the Goddess War trilogy), the sisters are in the final days of preparing for a bitter year that will end with two of them dead while the other reigns. In this bloody world, those who buck tradition are punished fiercely-a friend's loyalty is rewarded when the priestesses sever her hand, another is banished for aiding in an escape attempt-and human sacrifice is a proven way to sate the higher power and instill fear. This dark fairytale makes a slow processional toward the Beltane Festival, then rushes through the celebration to set up the next book. But along the way Blake establishes myriad side plots and relationships, builds complex characters, and leaves plenty of compelling avenues to explore in future books. Ages 14-up. Agent: Adriann Ranta, Foundry Literary + Media. (Sept.) © Copyright PWxyz, LLC. All rights reserved.

Gr 8 Up-A poisoner-a teen who comes from a line of people who are supposed to ingest poison without being harmed-whose body betrays the gift that should have been innate suffers the ravage of toxins to defend her house's reign over Fennbirn Island. A naturalist who dims in the brilliance of her childhood friend turns to low magic to mold the earth and its creatures. An elemental whose beauty is made more terrible by her savage fires and storms is trapped within the palms of the Temple priestesses, ruthless in their scheme to overthrow the Black Council. Three sisters celebrate their 16th birthdays at the Beltane festival, but two are to be murdered during the Quickening, and one is to be crowned the red-handed Queen. This is a story entrenched in deceit, twisted by selfish desires for redemption and revenge in a crooked game set in generations of insidious matriarchal rule. Readers will be riveted by Blake's ingenious world-building, stunning developments of main and supporting characters, and spiraling tensions. VERDICT Highly recommended for fans of fantasy action thrillers with strong female leads, such as Victoria Aveyard's "Red Queen" and Sarah J. Maas's "Throne of Glass" series.-Zeying Wang, School Library Journal © Copyright 2016. Library Journals LLC, a wholly owned subsidiary of Media Source, Inc. No redistribution permitted.

*Starred Review* Three Black Witches, all fair to be seen / Two to devour, / And one to be queen. So goes a children's song on the mainland, where the natives cast a suspicious eye to the island of Fennbirn. There several strains of magic run strong, and every generation a set of girl triplets is born to the queen. Each has a different magical ability, and they are separated and raised by a family with matching abilities. When they reach 16, their deadly fight for the crown begins, and the last girl standing becomes the queen until her own set of triplets are born. This year, with the triplets' sixteenth birthday approaching, the clear favorite is Mirabella, a powerful elemental who can manipulate the weather. Her sisters Katharine, who can make and ingest poisons, and Arsinoe, a naturalist who controls plants and animals are weak, their powers barely manifested. The outcome of the fight should be obvious, but there are other forces at work here, and the battle is only just beginning. With exquisite world building and luminous detail, this is high fantasy at its best. The magic is fierce and the plot intensely twisted, but at this novel's dark heart beats a story about sisterhood, the unbreakable bonds of family, and ties that bind enough to kill.--Reagan, Maggie Copyright 2016 Booklist

Every generation, royal female triplets are born, each to a different magical tradition. At sixteen, they fight to the death to rule Fennbirn Island. Blake builds a nuanced portrait of each girl, her powers, and her friends as the focus shifts among the heroines. The labyrinthine plot and its surprising twist set up a sequel; readers shouldn't expect resolution here. (c) Copyright 2017. The Horn Book, Inc., a wholly owned subsidiary of Media Source, Inc. No redistribution permitted.
More book reviews at iDreamBooks.com