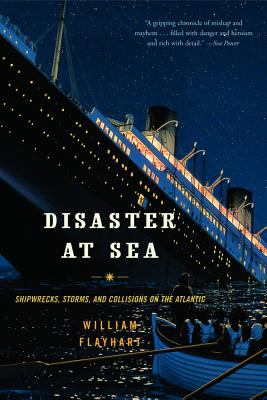 A colourful and deadly history of ocean liner disasters from the mid-nineteenth century to the present, Disaster at Sea is a chronicle of the most frightening episodes in the maritime history of the North Atlantic. From 1850 to the present day, the Atlantic has been home to hundreds of ocean liners and cruise ships, each more lavish than the last...all of them symbols of wealth and luxury. Perhaps this is why readers have always been fascinated by the lives of these ships ?and their deaths. Many of us know the stories of the Titanic and the Lusitania. Both tragedies caused tremendous loss of life, even as they made the ships immortal. But there are many little-known accounts of extraordinary survivals at sea, such as the Inman and International liner City of Chicago that jammed her bow into an Irish peninsula in 1892 but stayed afloat long enough for all to be rescued, or the City of Richmond that survived a dangerous fire in 1891, and a year earlier the City of Paris, whose starboard engine exploded at full speed in the mid-Atlantic and yet miraculously still made port. Often such tales are forgotten even if the ship sank: In 1898 the Holland-America liner Veendam hit a submerged wreck and sank at sea, but all lives were saved ?so this vessel's dramatic story seemed less important in maritime history than incidents involving human loss. As recently as 2000, the Sea Breeze I sank off the East Coast of the United States while on a positioning voyage, but all her crew members were rescued in a heroic effort by U.S. Coast Guard helicopters. These stories and many others are dramatic, and acclaimed maritime scholar William Flayhart has spent much of the last forty years in search of material from which to create colorful narratives. Author of The American Line: 1871?902 and coauthor of Majesty at Sea and the first edition of QE2, Flayhart retells classic ocean liner disaster stories while bringing to light never-before-published but compelling episodes in man's ongoing battle with the sea. 26 illustrations. Originally published in hardcover under the title Perils of the Atlantic.