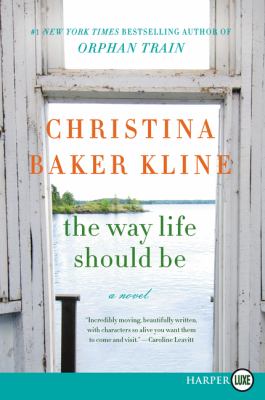 Genre/Form: Domestic fiction.DDC classification: 813/.54 Summary: Feeling stuck in her personal life and career, thirty-three-year-old Angela pursues a seemingly idyllic online relationship with a sailing instructor from Maine, relocates there, and learns important truths about understanding her own heart in finding happiness.
Tags from this library: No tags from this library for this title. Log in to add tags.
Fiction notes: Click to open in new window

From the #1 New York Times bestselling author of Orphan Train comes a novel of self-discovery and second chances.

Angela is single in New York City, stuck in a job she hates. She inherited a flair for Italian cooking from her grandmother, but she never seems to have the time for it.

On a hope and a chance, Angela decides to pack it all up and move to Maine, finding motivation in the dating profile of a handsome sailor who loves dogs and Italian food. But her new home isn't quite matching up with the fantasy. Far from everything familiar, Angela begins to rebuild her life from the ground up and, in the process, realizes there's really no such thing as the way life should be.

Feeling stuck in her personal life and career, thirty-three-year-old Angela pursues a seemingly idyllic online relationship with a sailing instructor from Maine, relocates there, and learns important truths about understanding her own heart in finding happiness.

Narrator Angela Russo's sardonic and self-deprecating humor saves Kline's (Desire Lines) third novel from being just another story of a single woman (age 33), frustrated with life in the city (New York), leaving for a simpler place (Maine), hoping she has found Mr. Right (or, in this case, "Maine Catch," his online dating site screen name). Seen through Angela's eyes, what could have been stock characters on the road to self-discovery-the Italian grandmother, remarried father, concerned friend from high school, new gay friend in Maine, callow lover, handsome stranger-turn out to be real people with pasts of their own. Hurtling into a new life after a career-ending event-planning disaster, Angela observes her own behavior critically, surprised at how she is able to throw caution to the wind. As winter approaches on Mount Desert Island, Angela's passion for cooking is reawakened, and she begins to believe in the gift (il regalo) her grandmother told her she had. Recommended for public libraries, especially where Elizabeth Berg and Elinor Lipman are popular.-Laurie A. Cavanrugh, Brockton P.L., MA (c) Copyright 2010. Library Journals LLC, a wholly owned subsidiary of Media Source, Inc. No redistribution permitted.

Thirty-three-year-old New Yorker Angela Russo, dissatisfied with a career that amounts to "gliding across a smooth plateau of predictability" and fed up with "abysmal" blind dates, responds to an online personal ad written by Rich, a sailing instructor from Mount Desert Island, Maine. Angela begins to fall in love with the idea of Maine life just as much as she finds herself falling for Rich, and when her career suddenly goes up in flames, she moves to Mount Desert Island. Once she arrives, however, she learns that her vision of perfect New England life-and her perfect New England man-is far removed from reality. Rather than return to New York, Angela rents a rundown cottage and begins teaching an impromptu cooking class (based on recipes from her Italian grandmother). She befriends an eclectic handful of locals and carves out a new identity for herself. Initially, this tale of a lovelorn city girl out of her element feels like another foray into well-covered territory. But Kline (Desire Lines; Sweet Water) has a perfect sense of character and timing, and her vivid digressions on food (recipes are included) add sugar and spice to what could have been a stale premise. (Aug.) (c) Copyright PWxyz, LLC. All rights reserved

Angela Russo, a 33-year-old event planner in New York City, has a job she finds monotonous, a lackluster love life, and a best friend who suggests trying an online dating service. Angela signs up and, on a whim, extends the site's geography search to include Maine, picturing herself in a cozy, rustic cottage by the shore. Before the inveterate Italian cook can say cacciatore, she's met her Maine man the handsome sailing instructor Richard Saunders. He sends her a flurry of haikus and flirtatious e-mails, and after a professional disaster befalls her, Angela finds herself driving up the coast to explore a new life with him. When she arrives in Maine, however, it is not the picture-perfect storybook scene she anticipated. But with her love of cooking and dreams of a cottage by the sea as guiding lights, Angela learns to live life and achieve success on her own terms.--Boyle, Katherine Copyright 2007 Booklist

A New Yorker moves to Maine in the latest from Kline (Desire Lines, 1999, etc.). As she approaches her mid-30s, Angela Russo is finding her life less than satisfying. True, she successfully made the move from Nutley, N.J., to Manhattan after college, but she hasn't done much since. Her job as an events planner for an art museum has become routine, and she hasn't had a proper romance in quite some time. She loves to cook, but she long ago ceased to bother, and she daydreams about leaving the big city behind for an adorable cottage on the coast of Maine. Everything changes, though, when she clicks on a banner ad for a dating service and discovers a pleasingly disheveled, blue-eyed blond who calls himself "MaineCatch." Flirtation by e-mail and phone ensues, and Angela neglects the other areas of her life as she pursues this new dalliance. Her distraction culminates in disaster--she hires a mentally unbalanced fire-eater for a museum gala and fails to buy supplemental fire insurance. Subsequently left jobless, she decides to take a chance on love. She gives up her apartment, puts most of her stuff in storage and moves to Maine, where she discovers that MaineCatch is not quite the rustic Renaissance man she'd been imagining. He does not, for example, live in the seaside cottage of her fantasies, but, rather, in an alarmingly charmless condo in a barren new subdivision, and Angela quickly realizes that he was not being clever or ironic when he sent her this haiku: "Soon you'll be coming / We'll have lots of sex I hope / My bed is king size." MaineCatch, it turns out, is not just a philistine, but also a bit of a bounder. Realizing this, Angela finds herself alone in Maine. Never fear: She makes friends, rediscovers her love of cooking and, by novel's end, finds herself on the brink of a new, better romance. Earnestly unoriginal. Copyright ©Kirkus Reviews, used with permission.
More book reviews at iDreamBooks.com