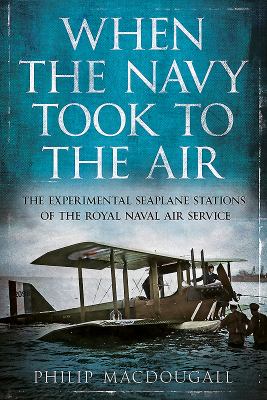 When the navy took to the air : the experimental seaplane stations of the Royal Naval Air Service / Philip MacDougall.

Up to and during the First World War, the Royal Navy was at the forefront of developments in aviation: concerned not just with the use of military aircraft to defend the fleet, but also securing the homeland against Zeppelin raiders and undertaking tactical air strikes into enemy territory. With the airplane a totally new and revolutionary weapon, the work of several experimental airfields and seaplane stations became crucial to the success of these operations. Taking the lead role were Felixstowe and the Isle of Grain, where work on the development of new aircraft and aerial weapons was handled, alongside groundbreaking advances in navigational systems, air-to-ground radio communication, and deck-board ship landings. These two air stations (as well as others with a more minor role) witnessed a huge scale of expenditure and the assembly of an elite group of experts and hotshot pilots who, in pushing the envelope to the extreme, sometimes sacrificed their own lives. The work of these experimental stations has been more or less forgotten, a result of the Royal Naval Air Service having been subsumed into the Royal Air Force, and the subsequent emphasis on the airplane as a weapon of land warfare. In this First World War anniversary period, it is a story that needs telling.