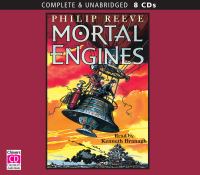 SoundPublisher number: CHCD 225 | Chivers AudioSeries: Reeve, Philip. Hungry city chronicles ; 1.Mortal engines series ; 1.Publication details: Bath [England] : Chivers Children's Audio Books, 2005Description: 8 audio discs (8 hrs., 32 min.) ; 12 cmContent type: spoken word Media type: audio Carrier type: audio discISBN: 0754067246Subject(s): Conduct of life -- Juvenile fiction | Friendship -- Juvenile fictionGenre/Form: Children's audiobooks. DDC classification: Talking Book Read by Kenneth Branagh.Summary: Tom Natsworthy lives in London and has a boring job at the Museum. Unexpectedly, he gets a chance to fulfill his day-dream of being a hero, as he attempts to save a famous adventurer from a would-be assassin. But Tom is not at all prepared for what happens next; and neither he, nor his world, will ever be the same again. Suggested level: intermediate, secondary.
Fiction notes: Click to open in new window

In this stunning literary debut, Reeve creates an unforgettable adventure story set in a dark and utterly original world. "A brilliant construction that offers new wonders at every turn."--"Publishers Weekly." A "School Library Journal" Best Book.

Tom Natsworthy lives in London and has a boring job at the Museum. Unexpectedly, he gets a chance to fulfill his day-dream of being a hero, as he attempts to save a famous adventurer from a would-be assassin. But Tom is not at all prepared for what happens next; and neither he, nor his world, will ever be the same again. Suggested level: intermediate, secondary.

In a dystopian future landscape, cities have uprooted themselves and donned wheels, consuming each other's resources. "Reeve's prose is sweeping and cinematic," PW said in a starred review. "He deftly weaves in social commentary on the perils of both war and consumerism." Ages 12-up. (Sept.) (c) Copyright PWxyz, LLC. All rights reserved

Gr 6 Up-This exciting and visually descriptive novel is set in the distant future, years after the Sixty Minute War resulted in many deaths and the loss of technological knowledge. Most people dwell in Traction Cities, metropolises built in tiers like wedding cakes that move across the ground on huge caterpillar tracks, chasing and absorbing smaller locales in a practice known as Municipal Darwinism. Scavengers roam the Earth's surface searching for ancient artifacts. Tom, a 15-year-old orphan who works at the London Museum, idolizes Valentine, a scavenger turned Head Historian. One night he saves his hero from being stabbed by a horribly disfigured girl who accuses the man of killing her parents. While escaping, Hester "falls" off London and Valentine deliberately pushes Tom after her. After surviving their fall, the two have many death-defying adventures as they attempt to make their way back to London. Meanwhile, Valentine's daughter discovers that her father is working with London's Lord Mayor to resurrect an ancient atomic weapon capable of mass destruction and tries to put things right. The story is believable and most of the characters are fully realized, particularly vengeful Hester and Grike, a lonely Borg-like stalker. The book has an ambience similar to that of Philip Pullman's "His Dark Materials" trilogy (Knopf). The first in a series, this action-packed adventure story presents moral questions about the use of atomic weapons.-Sharon Rawlins, Piscataway Public Library, NJ (c) Copyright 2010. Library Journals LLC, a wholly owned subsidiary of Media Source, Inc. No redistribution permitted.

Gr. 7-10. As the story opens, the great Traction City of London is chasing a small town. When one city takes over another, it processes all reusable materials to create power to run the motorized wheels that enable the city to travel over the land. London's mayor has bigger plans than the domination of a small town, plans involving the use of the weapon that laid waste to Earth millennia earlier. Several young people endeavor to stop the carnage--among them, Tom, an apprentice at the London Museum; a young woman who tries to kill the museum's head historian; the historian's daughter, Katherine; and an apprentice in the Guild of Engineers. The pace of the violence-filled story is frenetic, the sense of helplessness is palpable, and not all the young people survive. A page-turner, this adventure in a city-eat-city world will have readers eagerly suspending disbelief to follow the twists and turns of the imaginative plot. --Sally Estes Copyright 2003 Booklist

(Middle School, High School) In the distant future, long after the Sixty Minute War that destroyed civi-lization, London has become a ""Traction City,"" a vast wheeled mountain of metal that hunts down and ""eats"" other cities for raw materials. Down in the city's ""gut"" after one such kill, Apprentice Historian Tom Natsworthy saves the life of his hero, Head Historian Valentine, when Valentine is attacked by a girl from the captured city -- a girl, Hester Shaw, whose face is disfigured by a horrible scar. To Tom's shock, Valentine repays Tom for saving his life by shoving him down a waste chute after the escaped would-be assassin. Thus a gripping opening sequence culminating in Hester and Tom's narrowly surviving expulsion from the city gives way to a high-stakes odyssey of disillusionment. Hester tells Tom how Valentine killed her parents and left her for dead, and Tom reluctantly joins her on her quest for vengeance across the Hunting Ground, engaging with slavers, pirates, and an Anti-Traction aviatrix who teaches him to question the city-eat-city doctrine of ""municipal Darwinism."" Back in London, Valentine's daughter Katherine is making some disillusioning inquiries of her own with the help of Apprentice Engineer Bevis Pod. Who was the scarred girl, Hester Shaw? What happened to Hester's mother, the archaeologist who unearthed a doomsday weapon called MEDUSA, lately retrieved by Valentine? The book's tone of high adventure and danger; the grimy yet fantastical post-apocalyptic setting; the narrow escapes, deepening loyalties, and not-infrequent bitter losses -- all keep readers' attention riveted. Reeve brings all guns to bear in the elegiac confrontation at the climax, sending several characters to their deaths in a blaze of glory and the survivors to a sobering victory. Reeve will soon be the go-to man for imagination, excitement, and crowd-pleasing action; watch for more Hungry City Chronicles from this Smarties Book Prize winner. (c) Copyright 2010. The Horn Book, Inc., a wholly owned subsidiary of Media Source, Inc. No redistribution permitted. All rights reserved.

Reeve thinks big in this British prizewinner, envisioning a distant future in which immense mobile cities roar over continent-sized wastelands, preying on each other. Thanks to ruthless scavenger Thaddeus Valentine, London has acquired an ancient energy weapon powerful enough to overwhelm the well-defended but stationary cities of former Asia. To lowly apprentice Historian Tom Natsworthy, Valentine is a hero; Tom begins to find out differently after meeting Hester Shaw, a savagely mutilated young woman who saw Valentine murder her parents for the device. Ejected from the city as it barrels eastward, Tom and Hester encounter pirates and unexpected allies, battle an ancient cyborg warrior, and get an eye-opening look at their diverse world as they struggle to catch up. Running up the body count to staggering dimensions, the author propels his protagonists to a cataclysmic climax, folding in both instances of casual, inhuman brutality and satiric comments about "urban Darwinism." With the exception of that cyborg, the characters and societies are as uncomplicated here as the moral issues; readers who enjoy violent, titanic clashes between good and evil will be absorbed from beginning to end. First of a projected trilogy. (Fiction. 12-15) Copyright ©Kirkus Reviews, used with permission.