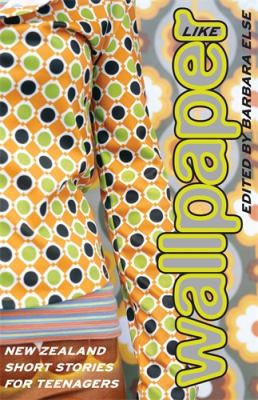 Like wallpaper : New Zealand short stories for teenagers / edited by Barbara Else.

"An anthology of New Zealand short stories especially for teenagers. Being a teenager is arguably the most intense time in anybody's life. It's a powerful, highly concentrated time when small things can seem insuperable but huge things are often accomplished without effort. The writers of the twenty stories gathered in this anthology have all been there, done that. One is in fact still there, going through the teenage years herself. Each story here reflects an aspect of what it is to be a teenager in NZ. The settings are New Zealand homes and flats, local schools and roads, beaches, rivers, cities. But in another sense each piece is universal. Issues addressed in the stories range across aspects of peer pressure and friendship. Parents and family relationships feature as do young romance, sexuality, and death. There is a mixture of tone, voice and form. The writers include Jane Westaway, David Hill and Fleur Beale as well as some stunning newcomers such as Natasha Lewis and Samantha Stanley. This book isn't just for people from thirteen to nineteen years old. It offers twenty ways to understand and relive those very particular times of exuberance, turmoil and adventure."