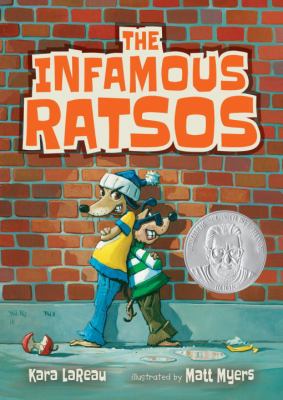 DDC classification: [Fic] Summary: Rat brothers Louie and Ralphie Ratso try to prove they can be as rough and tough as their father in the Big City, but every time they try to show how tough they are, they end up accidentally doing good deeds instead.
Tags from this library: No tags from this library for this title. Log in to add tags.

Louie and Ralphie Ratso are no softies! Readers are sure to chuckle as the determined Ratso brothers' plans to act tough go hilariously awry.

Louie and Ralphie Ratso's dad, Big Lou, always says that there are two kinds of people: those who are tough and those who are soft. Louie and Ralphie are tough, tough, tough, just like Big Lou, and they're going to prove it. But every time they try to show just how tough they are, the Ratso brothers end up accidentally doing good deeds instead. What'll Big Lou do when he finds out they've been acting like softies all over the Big City? Perfect for emerging and reluctant readers, this clever and surprisingly warmhearted chapter book shows that being tough all the time can be really tough.

Rat brothers Louie and Ralphie Ratso try to prove they can be as rough and tough as their father in the Big City, but every time they try to show how tough they are, they end up accidentally doing good deeds instead.

Louie and Ralphie Ratso are determined to be as tough as their truck-driver father, but the rats' efforts go hilariously awry in this funny, thoughtful, and smart chapter book. In episodic escapades, they steal a classmate's hat, make a new student a sandwich from the "worst foods they can find," and soap a neighbor's windows, only to be met with gratitude. "Pickled mushrooms and beets and eggplant, just like my nana used to make!" gushes gleeful sandwich recipient Fluffy Rabbitski. LaReau packs substantial comedy and poignant emotion into each chapter (the boys' mother has "been gone for a little while now"), adeptly amplified by Myers's spot art. Ages 5-8. Author's agent: Barry Goldblatt, Barry Goldblatt Literary. Illustrator's agent: Steven Malk, Writers House. (Aug.) © Copyright PWxyz, LLC. All rights reserved.

Gr 2-4-This second book in the series takes a look at facing one's fears and telling the truth. Louie and Ralphie Ratso are brothers with a plan: build a Big City FunTime Arcade that offers carnival games for neighborhood kids. With the help of their friends, they clean up a vacant lot located next to the neighborhood's haunted house, despite Louie's fear of the ghosts that may live there. Ralphie has his own troubles when a story circulates around school that he has a girlfriend, Stinky Stanko, known only for her overpowering odor. Who started the rumor, and how will he stop it? As Louie and Ralphie face their respective fears, they discover their own roles in creating them, and learn that the answer to facing fear is having the courage to look past beliefs and see the truth. LaReau's dialogue is fast-paced and funny, and the frequent black-and-white illustrations by Myers further develop the characters. The story is believable and resolves in a realistic way without feeling heavy-handed. However, the large number of secondary characters, many introduced in the first book in the series, might leave new readers feeling out of the loop. -VERDICT A strong chapter book that will appeal to both newly independent and slightly older but reluctant or stuggling readers.-Casey O'Leary, Mooresville Public Library, IN © Copyright 2017. Library Journals LLC, a wholly owned subsidiary of Media Source, Inc. No redistribution permitted.

*Starred Review* The scruffy do-gooders introduced in the Geisel Honor Book The Infamous Ratsos (2016) return with a community improvement project transforming a junk-littered empty lot into an arcade of homemade carnival games. Louie and his little brother, Ralphie, have no trouble enlisting their single dad Big Lou, as well as school friends like Fluffy Rabbitski and hulking Chad Badgerton but upsettingly, the ramshackle house immediately adjacent to the lot is said to be haunted. While dealing with his fear of ghosts, Ralphie is faced with the additional challenge of atoning for endowing skunk classmate Millicent Stanko with the crushing nickname Stinky. A sincere apology is one good step toward mending fences, but Ralphie goes further by inviting Millicent into the enterprise. At the same time, after a few words of wisdom from Big Lou on owning fears rather than letting them own him, Louie nerves himself to knock at the haunted house's door, and soon finds a way to draw its resident, lonely oldster Mr. Nutzel, into the arcade project. Myers endows LaReau's large type, well-leaded narrative with plenty of cartoons infused with humor (one of the arcade games is a variant on Whack-A-Mole dubbed Whack-A-Chad) and featuring an expressively posed, all-animal cast in human dress. The arcade's triumphant opening adds an upbeat closing flourish to another tale for fledgling chapter-book readers that highlights the profound value of kindness to others.--Peters, John Copyright 2017 Booklist

The newly reformed Ratso brothers, Louie and Ralphie, are now trying to make life easier for their friends and their community. Except for a little backsliding by Ralphie (for which he atones by the end), theyre on their way, with Louie once again proclaiming a really big idea: clean up an unsightly vacant lot and turn it into a community arcade. Working in cooperation with their classmates, they begin the job, but a pretty big hitch in their plans looms. The lot is located next to a creepy, maybe even haunted, house, and Louie, as project supervisor, must approach the scary resident. Ratso patriarch Big Lou steps in with wise advice: Its OK to be afraid, he tells Louie, adding, I try to be braveby reminding myself that Im the boss of me, not my fears. Louie faces his fears, goes to the haunted house, and discovers a way to help another creature. Myerss black-and-white illustrations not only move the plot along and give expressive faces to the animal characters but also conclude the tale on a light note with a couple of delightful puns. The relatable situations, familiar characters, progressive plot, and easy-to-read text (plus a little romance) create a satisfying follow-up to the Geisel Honorwinning The Infamous Ratsos (rev. 9/16). betty carter (c) Copyright 2017. The Horn Book, Inc., a wholly owned subsidiary of Media Source, Inc. No redistribution permitted.

Following The Infamous Ratsos (2016), Louie and Ralphie Ratso deal with different types of fear while starting a carnival-style arcade.The Ratso brothers love the carnival but wish it weren't just once a year. While walking past the junk-filled lot next to a house rumored to be haunted, Louie has a great idea. He gathers up their friends to clean the lot so that they can turn it into the Big City FunTime Arcade, with carnival games in lieu of video games. Though it's Louie's idea, he's secretly afraid of the haunted house and does his best to avoid it. Meanwhile, after Ralphie picks up and returns Stinky Stanko's fallen pen, rumors fly that they like each other, and he fears the rumors will be believed. Over a dinner Louie and Ralphie confess their fears to their father, Big Lou, who reassures them that even he is afraid of some things, tells Louie that ghosts aren't real, and encourages them to face their fears. Ralphie, seeking the source of the rumors, finds that Stinky's not odorous at all, but she's hurt by that nicknamewhich he gave her. Readers will be following right alongside these two likable rats as Ralphie confronts his past misdeeds and Louie screws his courage to the sticking post to ask the haunted house's resident for permission to use part of the yard. Charming. (Animal fantasy. 5-8) Copyright Kirkus Reviews, used with permission.
More book reviews at iDreamBooks.com