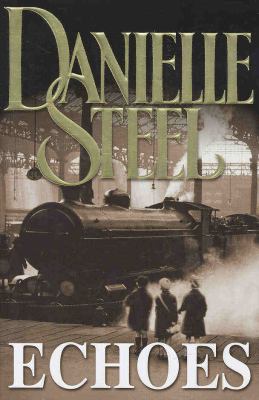 DDC classification: 813.54 Subject: Drawing us into the vanished world of pre-war Europe and into the brutal desperation of Germany's death camps, "Echoes" weaves an intricate tapestry of a mother's love, a daughter's courage, and the unwavering faith that sustained them - even in history's darkest hour.
Fiction notes: Click to open in new window
Total holds: 0

In 'Echoes' Danielle Steel tells the compelling story of three generations of women as they journey through years of loss and survival, linked by an indomitable devotion that echoes across time.

Drawing us into the vanished world of pre-war Europe and into the brutal desperation of Germany's death camps, "Echoes" weaves an intricate tapestry of a mother's love, a daughter's courage, and the unwavering faith that sustained them - even in history's darkest hour.

Not your typical Steel. During World War II, a Carmelite nun, daughter of a Jewish beauty who broke with her family to marry a Catholic, leaves the convent to join the French Resistance-and rediscovers her past. (c) Copyright 2010. Library Journals LLC, a wholly owned subsidiary of Media Source, Inc. No redistribution permitted.

Europe in the throes of WWI and II serves as backdrop for this latest dose of melodrama from megabestseller Steel. Bookish, raven-haired beauty Beata Wittgenstein meets dashing French nobleman Antoine de Vallerand while on vacation in Switzerland and falls passionately in love. An affluent German Jew whose strict Orthodox parents forbid marriage outside the faith, Beata knows that a union with a Catholic from war-rival France is out of the question. But love trumps all, and shortly after returning to Germany, Beata defies her family, arranging to meet Antoine in Switzerland, where they marry. When WWI ends, the de Vallerands return to Germany and live happily with their young daughters, Amadea and Daphne. Antoine manages the stables at an old friend's castle, the perfect job for him, but just as all seems well, he's thrown from a headstrong horse. Meanwhile, Hitler's anti-Semitic sentiments spread across Europe, and Beata fears that even her half-Jewish daughters are no longer safe. Devout Catholic Amadea plans to become a Carmelite nun, but as the Third Reich's campaign of cruelty escalates, she finds a greater sense of purpose outside the convent walls. There's enough romance to keep readers going, but fans who prefer the glitz and glamour of Steel's contemporary settings may be nonplussed, and the abrupt disappearance of several major characters leaves giant holes in the narrative. (Oct. 26) (c) Copyright PWxyz, LLC. All rights reserved

Steel presents a compelling tale of love and loss, set during World Wars I and II. At novel's beginning, it is 1915, and Beata Wittgenstein, daughter of a German banker, falls in love with Antoine de Vallerand, a French aristocrat. Because Antoine is Catholic, Beata's enraged father expels her from the family, proclaiming her dead. Beata moves to Switzerland, marries Antoine, converts to Catholicism, and has two daughters. The two live happily, despite missing their families (Antoine has been cast out of his family for marrying a Jew). When they move back to Germany, Beata establishes contact with her mother, who relates her fears for the increasing persecution of the Jews under the Nazi regime. Beata, who has lived as a Catholic for nearly 20 years, feels she is safe--in fact, her daughter, Amadea, has taken vows as a Carmelite nun-- but she watches in horror as her family members are shipped off to concentration camps. Readers will enjoy the multigenerational love stories and the historical plot. Librarians should stock up. --Kathleen Hughes Copyright 2004 Booklist

Skipping the glamour and glitz this time around, Steel (most recently, Second Chance, p. 473) makes a well-meaning attempt at a serious WWII tale (with star-crossed lovers, of course). Steel begins her tale, however, in 1915, some months after the Great War has begun. Beata Wittgenstein, the daughter of an upper-class, patriotic German-Jewish family, falls in love with a man she meets by chance: Antoine de Vallerand, who's Catholic and French. While he's handsome, brilliant, and charming, Antoine is not at all the sort of suitor the Wittgensteins had in mind for their lovely, studious, dutiful daughter. The Vallerand family is equally outraged. Nonetheless, Beata converts to Catholicism to marry Antoine, though her father, Jacob, declares his daughter dead to him from that day on. She decides not to tell her children that she is Jewish--a fateful decision for her daughter Amadea. Years later, Antoine breaks his neck in a riding accident, dying instantly. The grieving Beata becomes deeply religious and urges Amadea to live up to her name and enter a convent, though she still knows nothing of her Jewish background. When the Wittgensteins are killed during Kristallnacht, Beata confesses everything to her other daughter, Daphne, but not Amadea, hoping to protect her. Later, as WWII rages, Amadea is singled out by an unknown informer, rounded up with other French Jews, and sent to Theriesenstadt. She escapes and joins the French Resistance (where she meets handsome Serge, underground leader). Then, burned and paralyzed by a railroad bomb, she is airlifted to England (where she meets handsome Rupert, who's looking after a houseful of war orphans). Will she ever walk again? Will she return to the convent? Or marry Rupert? Get out your hankies, ladies. Steel put her all into this one. Copyright ©Kirkus Reviews, used with permission.
More book reviews at iDreamBooks.com