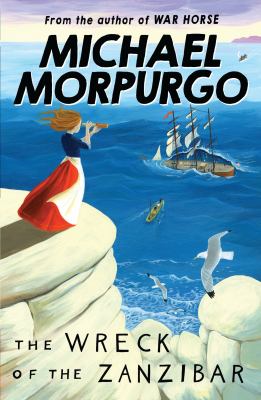 The wreck of the Zanzibar / Michael Morpurgo ; [illustrated by Christian Birmingham].

A gripping children's story from War Horse author and former Children's Laureate, Michael Morpurgo.We all knew what was going to happen. We'd seen it before. A ship about to founder staggers before she falls. A huge wave broke over her stern and she did not come upright again." Life on the Scilly Isles in 1907 is bleak and full of hardship. Laura's twin brother, Billy, disappears, and then a storm devastates everything. It seems there's little hope. But then the Zanzibar is wrecked on the island's rocks, and everything changes...

It is 1907 and life on the Scilly Isles is bleak and difficult. Lauras' father almost admits defeat and return to the mainland but an unexpected storm brings and unexpected harvest to the Island ...

Morpurgo (The War of Jenkins' Ear) spins a tale as compelling as it is unusual in its setting and plot. The story unfolds in journal entries and watercolor illustrations made by 14-year-old Laura Perryman in 1907 and 1908. She tells of her life on storm-battered Bryher Island, among Britain's Scilly Isles, where her family's survival depends on the mercy of the elements and, especially, the sea. This winter is particularly harsh, with the family's cows sickening and dying, the weather destroying houses and boats, the food stores dwindling and Laura's twin brother, Billy, running away to join a ship's crew. All anyone can hope for is a shipwreck, that the people of Bryher might salvage its cargo. As bleak as Laura's days are, she is gentle enough to protect a sea turtle that might otherwise serve as food, and hopeful enough to dream of rowing in the island gig despite repeated declarations that a girl will never be allowed to handle one of the oars. Laura gets her chance in a dramatic storm and shipwreck, and she helps save the island. A hearty, old-fashioned survival tale that should appeal equally to both sexes. Ages 10-14. (Oct.) (c) Copyright PWxyz, LLC. All rights reserved

Gr 3-5The diary of Laura Perryman, 14, describes the fateful year of 1907 on the Scilly Isles off the southwest coast of England. Laura yearns to row in a gig alongside her father and the other men when they salvage ships that run aground, but he refuses to let her do so. Conflict within the family increases when her twin brother runs away to sea; she blames her father for his flight. A violent storm in the autumn destroys most of the islanders' homes and the residents consider leaving forever. As a feeling of hopelessness engulfs Laura, she finds a large turtle beached on the sand. Symbolically, her feelings of helplessness will be mitigated if she can save it, and her grandmother aids her in this quest. As December approaches, another storm hits and a wreck is sighted. Laura finally gets her chance to row, and her brother is among the rescued seamen. The goods aboard the Zanzibar restore prosperity to the island, and Billy's return signals new harmony within the family. The action in this short novel builds slowly toward the final chapter. Billy declares at the end, like Dorothy, ``...there's nowhere else in the world quite like Scilly, nowhere like home.'' To believe the happy ending is to subscribe to the explanation offered by Laura's grannythe rescued turtle is repaying a debt. Bright watercolor illustrations scattered throughout do much to enliven the text. In all, a story that's well written but that has limited appeal.Joanne Kelleher, Commack Public Library, NY (c) Copyright 2010. Library Journals LLC, a wholly owned subsidiary of Media Source, Inc. No redistribution permitted.

Gr. 4^-6. Spare but lyrical, this short novel begins with a first-person framework story in which a man revisits the Scilly Island home of his great-aunt Laura after her death. There, he finds that she has left him the diary she kept when she was 14. It was the year her brother ran off to sea, the year that misfortune visited and revisited her island home, the year that she and her grandmother saved a turtle stranded by the sea, the year the sea saved her neighbors and restored her family through a shipwreck. Throughout the book, Francois Place's small watercolor paintings reflect the innocence, pain, and grace of the story. The illustrated diary format has its appeal, giving immediacy to a setting removed in time and place, but the story's main strength lies in the telling. --Carolyn Phelan

A great-aunt's childhood diary opens a window to the past in this introspective, deeply felt story by Morpurgo (The War of Jenkins' Ear, p. 1284, etc.). The year 1907 is a hard one for the Perrymans: 14-year-old Laura's beloved twin brother Billy runs away to sea; the only milk cows die; and great storms devastate the islands. Starvation is a real threat, but when Laura finds a stranded leatherback, she hides it until she can help it back to the sea. Salvation comes in the form of a shipwreck: From a cargo vessel, the islanders salvage live cattle, lumber, goods, and Billy, home to stay. Place's small, frequent watercolors feature windswept littoral scenes and lonely figures, echoing the text's focus on the Perrymans' grief and the isolation of the island. Laura takes an active role in the rescue; her courage lights up a small, tidy drama. (Fiction. 10-12)
More book reviews at iDreamBooks.com