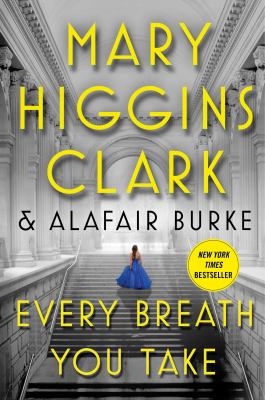 Every breath you take / Mary Higgins Clark and Alafair Burke.

Genre/Form: Thrillers (Fiction) | Detective and mystery fiction.DDC classification: 813.54 Summary: The fourth collaborative novel in the Under Suspicion series by Mary Higgins Clark and Alafair Burke, takes place at the Met Gala in New York City.
Tags from this library: No tags from this library for this title. Log in to add tags.
Fiction notes: Click to open in new window

"Queen of Suspense" Mary Higgins Clark and Alafair Burke are back with their fourth book in the New York Times bestselling Under Suspicion series; Every Breath You Take follows television producer's Laurie Moran investigation of the unsolved Met Gala murder--in which a wealthy widow was pushed to her death from the famous museum's rooftop.

Laurie Moran's professional life is a success--her television show Under Suspicion is a hit, both in the ratings and its record of solving cold cases. But her romantic break from former host Alex Buckley has left her with on-air talent she can't stand--Ryan Nichols--and a sense of loneliness, despite her loving family.

Now Ryan has suggested a new case. Three years ago, Virginia Wakeling, a member of the Board of Trustees of the Metropolitan Museum of Art and one of the museum's most generous donors, was found in the snow, after being thrown from the museum's roof on the night of its most celebrated fundraiser, the Met Gala. The leading suspect then and now is her much younger boyfriend and personal trainer, Ivan Gray.

Ivan runs a trendy, successful boutique gym called Punch--a business funded in no small part by the late Virginia--which happens to be the gym Ryan frequents. Laurie's skepticism about the case is upended by a tip from her father's NYPD connection, and soon Laurie realizes there are a bevy of suspects--including Virginia's trusted inner circle.

As the Under Suspicion crew pries into the lives of a super wealthy real estate family with secrets to hide, danger mounts for several witnesses--and for Laurie.

The fourth collaborative novel in the Under Suspicion series by Mary Higgins Clark and Alafair Burke, takes place at the Met Gala in New York City.

The death of 68-year-old socialite Virginia Wakeling, who took a fatal fall off the roof of New York's Metropolitan Museum of Art, propels bestseller Clark and Burke's tepid fourth novel featuring Laurie Morgan (after 2016's The Sleeping Beauty Killer). Three years after Virginia's death, Laurie, the producer of Under Suspicion, a TV show that examines cold cases, is pushed by host Ryan Nichols and studio head Brett Young into exploring it as a possible subject. Laurie has doubts because the case isn't really old enough to be considered cold, and Ryan, who pitches the idea, is friends with Ivan Gray, Virginia's boyfriend and the primary suspect. After Laurie listens to Ivan, considers the venue where Virginia was killed (an A-list do at the Met featuring an exhibit of gowns worn by first ladies), and makes a list of other possible suspects, she becomes more interested in proceeding. As Laurie follows a formulaic path to the truth, a constant undercurrent is her fractured romance with the show's former host, Alex Buckley, and the possibility of repairing it. Series fans will hope for a return to form next time. Agents: Bob Barnett and Deenen Howell, Williams & Connolly. (Nov.) © Copyright PWxyz, LLC. All rights reserved.

In their fifth collaboration (following The Sleeping Beauty Killer, 2016), the award-winning duo of Clark and Burke have true-crime TV producer Laurie Moran looking into an heiress' fall at the world-famous Met Gala. Personal trainer Ivan Gray wants Moran's show to prove that he didn't push his wealthy (and much older) fiancée off the top of Metropolitan Museum of Art during the annual gala. Others suspects include the victim's adult children, a ne'er-do-well nephew, and a churlish secretary. Laurie's attention is only partially on the case, however. She can't stop wondering if her show's handsome former host's move to D.C. means that there won't be a second chance for their budding romance. Series fans will gobble up another fast-paced adventure with prime-time-drama appeal.--Keefe, Karen Copyright 2018 Booklist

Laurie Moran, intrepid executive producer of the true-crime series Under Suspicion, agrees to reopen a cold case so recent that it's hardly fair to call it cold.In the three years since Virginia Wakeling celebrated a gala at the Metropolitan Museum of Art, where she served as a trustee and a generous donor, by taking a header off the museum's roof, no one involved has changed their minds about who was responsible. Every single member of Ginny's family is convinced she was murdered by Ivan Gray, a bodybuilder 20 years her junior who they're convinced was less interested in her than in the fortune she inherited from her developer husband. Ivan has never stopped protesting his innocence, and now he's convinced Under Suspicion host Ryan Nichols, whom he's been training at the successful Manhattan gym into which Ginny pumped $500,000, to reopen a case NYPD Detective Johnny Hon is hardly ready to call closed. Much as she dislikes getting rushed into a story, especially by a host who's clearly made up his own mind about Ivan's innocence, Laurie (The Sleeping Beauty Killer, 2016, etc.) agrees that it's a perfect story for Under Suspicion and promptly sets about harassing the family. At least that's how Ginny's children, Carter and Anna, who run the family business; Anna's husband, commercial real estate lawyer Peter Browning; and Ginny's nephew, long-marginalized Tom Wakeling, would describe it. Instead of a courtroom, Clark and Burke once more provide taping sessions during which Laurie, Ryan, and assistant producer Jerry Klein get to cross-examine the Wakelings in the hope that one of them will confess on camera (which doesn't happen) or get angry enough to take a swing at Ryan (which does). But it's hard for Laurie to put her heart into a case to which every party acts guilty, especially when that heart is still yearning for Ryan's predecessor in the host's seat, Alex Buckley, who was last spotted headed toward a federal judgeship.Readers who recognize early on that the most suspenseful question here is whether the heroine will regain her lost love will know perfectly well whether this latest installment is for them. Copyright Kirkus Reviews, used with permission.
More book reviews at iDreamBooks.com