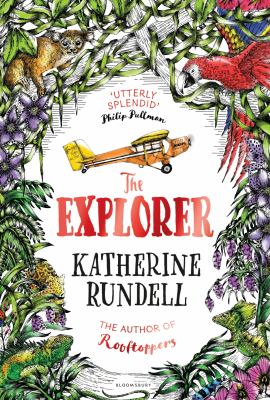 Genre/Form: Fiction. | Juvenile works. | Children's fiction.DDC classification: 823.00 Summary: Fred, Con, Lila, and Max are on their way back to England when the plane they're on crashes in the Amazon jungle and the pilot dies upon landing. For days they survive alone, until Fred finds a map that leads them to a ruined city, and to a secret.
Tags from this library: No tags from this library for this title. Log in to add tags.

Winner of the Children's Book Prize Winner of the Costa Children's Book Award 2017 Winner of the London Book Fair Children's Travel Book of the Year Longlisted for the CILIP Carnegie Medal 'I loved The Explorer ' Jacqueline Wilson 'Rundell is now unarguably in the FIRST RANK' Philip Pullman From his seat in the tiny aeroplane, Fred watches as the mysteries of the Amazon jungle pass by below him. He has always dreamed of becoming an explorer, of making history and of reading his name amongst the lists of great discoveries. If only he could land and look about him.As the plane crashes into the canopy, Fred is suddenly left without a choice. He and the three other children may be alive, but the jungle is a vast, untamed place. With no hope of rescue, the chance of getting home feels impossibly small.Except, it seems, someone has been there before them ...

Fred, Con, Lila, and Max are on their way back to England when the plane they're on crashes in the Amazon jungle and the pilot dies upon landing. For days they survive alone, until Fred finds a map that leads them to a ruined city, and to a secret.

A plane crash strands four children in the Amazon in this mesmerizing tale of courage and adventure from Rundell (The Wolf Wilder). Fred, Con, Lila, and Lila's five-year-old brother, Max, must face predators (including piranhas and caimans), growing hunger, and extreme elements if they hope to find their way back to civilization. A map, found by chance, charts their course, leading them to a ruined city of secrets. The dangers of the Amazon leap from the pages, as does the daring the main characters display amid overwhelming circumstances. Readers will be fascinated by the lengths the children go to in order to survive: "The grubs, when mixed with the cocoa beans and pounded with a clean stick, turned into a paste, which, if you squinted and were of an optimistic temperament, looked like flour and water." A quieter thread contemplates the nature of exploration and curiosity, tying into the enigmatic city of ruins. Fans of survival stories like Hatchet and My Side of the Mountain are an ideal audience for this fast-paced escapade with a lush and captivating setting. Ages 8-12. Agent: Claire Wilson, Rogers, Coleridge & White. (Sept.) © Copyright PWxyz, LLC. All rights reserved.

Gr 5-8-The fiery crash of a six-seater plane, following the apparent heart attack of its pilot, leaves British adolescents Fred and Con and Brazilian children Lila and her brother Max stranded in the Amazon jungle, having escaped the flames and left relatively unhurt, but with little knowledge of how to survive. Strangers to one another, the three young teens must overcome their emotional baggage and learn to cooperate in order to deal with the needs and antics of five-year-old Max. Building a raft, they intend to follow the river to Manaus using a map they find hidden in a tree, but their journey leads them to an ancient lost city and a strange man who is possibly a famous explorer who disappeared years before. The author's knowledge of the flora and fauna of the Amazon, lends authenticity to the setting as the children experience both beauty and danger, pooling their own limited knowledge to build a fire, extract honey from a beehive, eat grub pancakes, watch cavorting pink dolphins, adopt a baby sloth, avoid treacherous piranhas and caimans, and face their fears and personal histories. Each character has a unique backstory and talent or special interest that contributes to his/her survival. Elegant descriptive passages and lyrical writing ("The fire made a noise like an idea being born, a roar that sounded like hope") enhance but also occasionally jar the fast-paced, often gritty narrative. -VERDICT Fans of adventure novels such as Gary Paulsen's Hatchet or Willard Price's "Adventure" series (which are also favorites of Rundell) will enjoy this jam-packed survival -story.-Marie Orlando, formerly at Suffolk Cooperative Library -System, Bellport, NY © Copyright 2017. Library Journals LLC, a wholly owned subsidiary of Media Source, Inc. No redistribution permitted.

A plane carrying four children plunges into the Amazon's leafy canopy after the pilot loses consciousness at the controls. Miraculously, the kids survive the crash, but with no adults to help them, will they be able to survive the jungle? Such is the fiery premise of Rundell's (The Wolf Wilder, 2015) newest offering, which is as much about escaping nature's dangers as appreciating its wonders. Fred, Con, and siblings Lila and Max have never met before being stranded together, and the stress of their situation doesn't make getting along any easier. Tempers flare and tears fall, but they gradually learn to work together, each contributing valuable knowledge or skills to their quest to find civilization. Readers enamored by survival fiction are in for a treat as the foursome evades deadly animals, builds a river raft, and stumbles upon the remains of an ancient city. Fred emerges as the dominant figure in the narrative, and his fascination with explorers becomes particularly useful. Suspense joins emotional revelation in this exciting exploration of friendship and nature's wild beauty.--Smith, Julia Copyright 2017 Booklist

When four children are marooned in the Amazon jungle, they eventually make their way to the ruins of an ancient city, inhabited by "the explorer," a British man with a tragic past. This fanciful survival adventure, relayed in suitably fanciful prose, evokes the improbabilities of nineteenth-century boys' adventure stories, British imperial exploration, and a brief moment of postcolonial awareness. (c) Copyright 2018. The Horn Book, Inc., a wholly owned subsidiary of Media Source, Inc. No redistribution permitted.

A crash-landing in the Amazon leaves four children stranded in the deep jungle. They are Fred, a tall, white English boy, biracial Brazilian siblings Lila and 5-year-old Max, and a pale, white English girl, Constantia. Together they search for shelter and forage for edible fruits and larva. When Fred stumbles upon an old map, they decide to follow it to the X. In their handmade raft the crew travels down the river, through murky and clear waters, until they rediscover a lost city. Among the ruins they meet a mysterious man. He refuses to give his name, but will he refuse to help them get home? Rundell breathes character into the Amazon rain forest. The sounds, smells, flora, and fauna are vivid and tangible in the mind. The children are not as colorful, unfortunately. Fred, Lila, and Con give voice to their fears at every step, from climbing trees to facing down wild animals. Max has brief moments of wisdom in between bouts of tears or unbridled joy. The unnamed explorer does add some vibrancy to the book and commands attention despite the lush backdrop. His commentary on the effects of European imperialism is commendable although brief. A tropical action-filled adventure with heart. (Adventure. 8-12) Copyright Kirkus Reviews, used with permission.
More book reviews at iDreamBooks.com