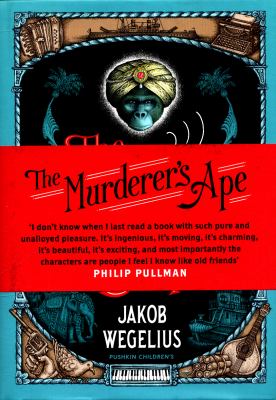 The murderer's ape / Jakob Wegelius ; translated from the Swedish by Peter Graves.

Summary: When her best friend, the sailor Henry Koskela, is falsely accused of murder, a gorilla named Sally Jones visits the run-down docks of Lisbon, embarks on a dizzying journey across the seven seas, and calls on the Maharaja of Bhapur's magnificent court--all in an attempt to clear Henry's name.
Tags from this library: No tags from this library for this title. Log in to add tags.

First published in Sweden in 2014.

When her best friend, the sailor Henry Koskela, is falsely accused of murder, a gorilla named Sally Jones visits the run-down docks of Lisbon, embarks on a dizzying journey across the seven seas, and calls on the Maharaja of Bhapur's magnificent court--all in an attempt to clear Henry's name.

Translated from the Swedish.

Sally Jones is a top-notch engineer, excels at chess, and exceeds expectations at every turn-that she is a gorilla may be the least interesting thing about her. Working aboard a cargo ship, the Hudson Queen, with her dear friend Chief, Sally Jones is content and safe, but when a job goes awry, Chief lands in prison for murder and only Sally Jones knows he is innocent. Determined to clear his name, the indomitable gorilla forges unexpected friendships, travels countless miles, and barely survives death on numerous occasions. Meticulous black-and-white character illustrations introduce key players at the novel's start, and spot illustrations adorn the heading of each chapter, offer tempting glimpses of what awaits. Originally published in Sweden and ostensibly typed out by the gorilla on a typewriter, Wegelius's story is a thrilling adventure, but it's Sally Jones's devotion to her friends and poignant observations that set it apart ("Poor Chief," she thinks after his arrest. "The accident wasn't his fault, but he would never forgive himself, I knew that"). Prepare to meet the remarkable Sally Jones; you won't soon forget her. Ages 12-up. (Jan.) © Copyright PWxyz, LLC. All rights reserved.

Gr 4-8-An engagingly accessible but quirky mystery featuring a gorilla named Sally Jones who not only narrates the story but can also read and write. She just doesn't talk. Sally Jones is an engineer working for Chief Koskela on his ship, the Hudson Queen, in this suspenseful and well-plotted adventure. In Lisbon, Portugal, while carrying what they think is a crate of tiles, Sally Jones and the Chief are attacked by robbers, and the ship is sunk. Things go from bad to worse when the Chief is shortly thereafter arrested for the murder of the man who hired them to transport the cargo. Sally Jones is on her own, decried by passersby as "the murderer's gorilla." Attracted to the music of a factory worker named Ana Molina, Sally Jones forges a new life but is determined to prove the Chief's innocence. It's her ability to work mechanical miracles-even with accordions-and her hard work ethic that help her find friends who support her on her quest for answers. A circuitous journey leads her to India and a completely fabulous maharaja. All events occur in the early part of the 20th century, when cars, planes, and typewriters were newfangled inventions. The book has been translated from Swedish and contains a series of portraits of the main cast of characters filling the opening pages, and there is surprisingly little to deter readers from immediately falling for Sally Jones and eagerly cheering her on. There are moments that are a little over-the-top or stereotypical, such as the abilities of the ape, the maharaja's wealth, and Ana's captivating voice. A new animal heroine has arrived on the scene, and while she may not rival Charlotte for her wisdom, her writing is just as engaging and her persistent loyalty equally admirable. VERDICT An unusual and oddly charming adventure. A solid purchase for medium to large middle grade collections.-Carol A. Edwards, formerly at Denver Public Library © Copyright 2016. Library Journals LLC, a wholly owned subsidiary of Media Source, Inc. No redistribution permitted.

*Starred Review* Sally Jones is an engineer, a shipmate, a friend, and a gorilla. Though she understands English, she doesn't speak it, and many people assume she is just another animal. Sally Jones and her constant companion, Captain Henry Koskela (called the Chief), made many sea voyages until a stop in Lisbon results in the Chief being imprisoned for the murder of a man named Alphonse Morro. Alone and devastated by his loss, Sally Jones is taken in by Ana Molina, a young singer, and begins to piece together the events that led to the Chief's imprisonment. Determined to prove his innocence, Sally Jones begins a journey that will last several years and span multiple countries: from Lisbon, she travels as far as India in search of clues about the mysterious Alphonse Morro, who may not be dead after all. Though she meets many unsavory characters and is often threatened with zoos, her talent with machinery, resourcefulness, and enduring goodwill see her through. This story was originally published in Sweden to great critical acclaim, and numerous black-and-white drawings throughout add to its unusual appeal. For American readers, this will have a distinctly old-fashioned feel. While the sheer length and thoughtful pace of Sally Jones' journey might discourage some, those who persevere will have a richly imagined and thoroughly unique adventure in store.--Reagan, Maggie Copyright 2016 Booklist

In Lisbon, Sally Jones (a gorilla living in the human world) and the Chief accept cargo from one Alphonse Morro for their ship the Hudson Queen. But the tiles he asked them to transport turn out to be guns; his men take over the Hudson Queen; she founders on rocks and sinks; and Sally Jones and the Chief return shipless to Lisbon. There the Chief gets into a fight with Morro and ends up being charged with his murder and imprisoned. The five-hundred-odd pages that follow chronicle Sally Jones's far-ranging efforts to clear her friend's name. Sally Jones, who can read, write, and understand human speech, is very good with her hands, especially around engines and machines, a skill that serves her well as she goes about building herself a new life. She is such a sympathetic character, with her longing for the Chief and her dread of being caged in a zoo, that readers will be entirely content to follow her slow progress, the novel's pace being more leisurely than dramatic yet somehow highly satisfying. The global cast of characters is introduced in the opening pages in a series of grainy-textured, black-and-white caricatures; subsequently, chapter-heading vignettes follow the action. anita l. burkam (c) Copyright 2017. The Horn Book, Inc., a wholly owned subsidiary of Media Source, Inc. No redistribution permitted.

When her friend and partner, the sailor Henry Koskela, is wrongfully imprisoned for murder, Sally Jones works for years to free him. The ape Sally Jones, who can understand speech, respond with nods, write slowly, and play chess, tells her tale by typing on an old Underwood typewriter. Its the tale of the murder of Alphonse Morro, but its far from simple. When Koskela goes to prison for killing Morro (whose bodys not found) after Morro lied to Koskela about the cargo he and Sally Jones were to transport (gunsnot roofing tiles), Sally Jones eventually finds a safe place to stay with singer Ana Molina and her musical-instrumentrepairing landlord, Luigi Fidardo. Thus begins a continent-spanning quest filled with betrayal and intrigue and engineering and music. Set in the very early years of the 20th century, Wegelius award-winning novel won Swedens August Prize for best novel for youth, as did his first book about Sally Jones, not yet published in the United States, and features a complex mystery, an intricately constructed narrative, and deep characters. It has enough adventures for a trilogy at least, but the pacing is slower than modern American adventure novels. Sally Jones is a compelling narrator, and the detailed illustrations by the author add much (and depict a largely white human cast). Short attention spans need not apply, but committed, careful readers will be richly rewarded. (Mystery. 10 up) Copyright Kirkus Reviews, used with permission.
More book reviews at iDreamBooks.com