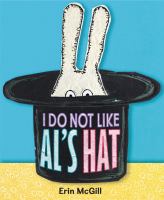 <p>When Herb, a magician's rabbit, gets sick and tired of being pulled out of Abracadabra Al's hat, he quits and sets out to find a new job. A funny and irreverent picture book about standing up for yourself, complete with bright collage art and a healthy dose of friendship. "What a romp! Sure to be a read-aloud favorite."--School Library Journal</p> <p>Herb the magician's rabbit loves the attention, the applause, and the carrots that are thrown on the stage every night by his adoring audience. But Herb does not like being stuffed into Abracadabra Al's hat and--Presto!--being pulled out by his ears. Ouch!</p> <p>Finally fed up, Herb quits his job as a magician's rabbit and sets out to look for a new profession. Should he become a carrot farmer? Try his luck as a wild rabbit? Or take a risk and become a girl named Sophie's pet rabbit? This funny picture book stars a big and floppy-eared rabbit with some strong feelings about the importance of good workplace conditions. Herb is a great character to introduce at Easter, and his story of finding friendship and happiness against all odds will resonate year round. "This unexpected and lovely offering that ends with a warm friendship is beautifully illustrated with McGill's expressive, whimsical collages."--School Library Journal</p>

Tired of being pulled out of a magician's hat, Herb the rabbit looks for a new profession.

Herb, a magician's rabbit, tries to find a new gig in McGill's first solo picture book. "I do like the spotlight. I do like the applause. And I do like the carrots," Herb confesses, but constantly being stuffed into and yanked out of Abracadabra Al's hat has taken a toll on his ears, which he carefully bandages up before hitting the road. Sitting at a juice bar, Herb contemplates life as a wild rabbit (as part of a bunny biker gang) and a veggie farmer, but neither imagined scenario goes well. That leaves a job as a pet rabbit, and after answering a classified ad placed by a four-year-old named Sophie, Herb finds the home he's been seeking. McGill brings a lot of energy to her scraggly mixed-media collages, but the compositions can be busy or hard to decipher-when Herb realizes that he isn't "cut out for the wild life," he's shown sprawled out on the ground beside his motorcycle, but it's not really clear what happened. Although Herb's pared-down narration should prove encouraging to emerging readers, Herb never gets much of a personality. Ages 4-8. (Jan.) © Copyright PWxyz, LLC. All rights reserved.

PreS-Gr 2-Herb, who is Al the magician's rabbit, has had it. He relishes the spotlight, the applause, and the carrots, but his ears hurt from night after night of being pulled out of a hat. He needs a new job, but the only options seem to be pet rabbit, wild rabbit, and veggie farmer. Weighing the pros and cons (and teaching readers about decision-making in the process), Herb finds that each vocation falls short. Then-ta da!-he tries the classified ads and meets a new friend, one who, too, enjoys the spotlight, the applause, and carrot cake. This unexpected and lovely offering that ends with a warm friendship is beautifully illustrated with McGill's expressive, whimsical collages. It lends itself to multiple storytime pairings-for farm tales with a twist, pair it with Susan Pearson's Slugs in Love; for a storytime featuring classified ads, grab this and Rachael Mortimer's The Three Billy Goats Fluff; and for unexpected friendships, read this and Phyllis Root's Toot Toot Zoom! VERDICT What a romp! Al's loss is readers' gain when Herb goes on the lam. Sure to be a read-aloud favorite.-Henrietta Verma, National Information Standards Organization, Baltimore © Copyright 2016. Library Journals LLC, a wholly owned subsidiary of Media Source, Inc. No redistribution permitted.

Life as a magician's rabbit hasn't been particularly good for Herb. Every night, he hunkers down in Abracadabra Al's hat, and every night, Al yanks him out by the ears. Though Herb likes the spotlight, the applause, and especially the carrots, he does not like Al's hat (My ears have had enough). So Herb, ears heavily bandaged, packs up his carrots and starts pounding the pavement, looking for a new job. His list of job potentials is easily shortened: I do not think I am cut out for the wild life, he says, imagining a horde of motorbike-riding wild rabbits. Farming, too, fails to make the cut, so Herb begins scanning the classifieds for jobs as a pet rabbit. When he meets Sophie, the moment of truth has come: Is this the job for Herb? The cut-paper, ink, and gouache illustrations are wacky and colorful, capturing Herb's vivid imagination and woefulness, and the dry, witty narration is giggle bait. A fun romp for amateur magicians and pet-lovers alike.--Reagan, Maggie Copyright 2016 Booklist

A magician's rabbit decides he's had his ears pulled one too many times. Herb is a rabbit who's been working with magician Abracadabra Al. Even though Herb likes the spotlight, applause, and carrots that come with working in Al's magic shows, he doesn't like Al's hat. Poor Herb's ears (which have cunningly real-looking bandages on them, evidence of McGill's multimedia art) have had enough, and narrator Herb decides it's time for a new job. Possibilities include: 1. Wild Rabbit, 2. Veggie Farmer, 3. Pet Rabbit. Using humor and human stereotypes, Herb debates each possibility, pros and cons exemplified through words and images. McGill's cut-paper, gouache, and ink illustrations offer a plethora of textures for readers to explore within each spread. Unsuited to the first two career paths, Herb answers an ad for a pet rabbit placed by a little blonde white girl named Sophie. At last a job that suits him, mostly because of carrot cake...and because of Sophie's love. Since Herb does not leave Al's employ for lack of affection, the fact that Herb is so taken by Sophie's love feels rather like an afterthought. Fans of quirky humor and hard-core rabbit lovers won't mind the arbitrariness of the ending, and the art is charming. (Picture book. 4-8) Copyright Kirkus Reviews, used with permission.