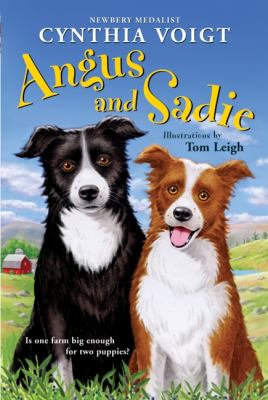 Genre/Form: Fiction. | Juvenile works.DDC classification: [Fic] Summary: Angus and Sadie, two siblings that are of mostly border collie heritage, are adopted by a young couple and start living on a Maine farm, where they begin to learn sheep herding and come to appreciate how they are different from each another.
Tags from this library: No tags from this library for this title. Log in to add tags.

Newbery Medalist Cynthia Voigt presents this charming middle grade novel about two border collie puppies growing up on a farm--a brother and sister who couldn't be more different from each other...or so they think. "Voigt's touch with dogs is as deft as it is with humans," raved The Horn Book.

Angus and Sadie are siblings, but that doesn't mean they're the same. Angus is black-and-white and bigger. He is a good, brave, and clever dog--and he likes that. Sadie, on the other hand, is red-and-white and small. She isn't as quick to learn--or to obey. Angus thinks she's scared of everything, but Sadie knows that's not true. She's just different.

This heartwarming story of two wonderful border collie siblings growing up on a farm in Maine is perfect for young readers who enjoyed Ann M. Martin's A Dog's Life and John Grogan's Marley books, animal lovers of all ages, and anyone who's ever had--or wondered what it would be like to have--a brother or sister just like themselves, but very, very different.

Angus and Sadie, two siblings that are of mostly border collie heritage, are adopted by a young couple and start living on a Maine farm, where they begin to learn sheep herding and come to appreciate how they are different from each another.

Newbery Medalist Voigt (Dicey?s Song) offers a bighearted novel that playfully and affectingly combines human and canine perspectives of life on a farm. Mister and Missus, a young Maine couple, adopt two littermates that are part border collies. The author gives them distinctive personalities: adventuresome, confident Angus is a quick learner and a natural herder; smaller Sadie is initially timid and easily distracted, yet becomes increasingly independent and brave?and gracefully dances with moths. The extremely eager-to-please pair will as easily endear themselves to readers as they do to their new owners. At first, the puppies? conversation, presented in italics, is limited to the simplest utterances (?Hungry! Me, too!?). Yet as they grow, so do their vocabularies?and their contributions to the narrative. In addition to quoting Angus and Sadie directly, the text slips in and out of their thoughts, which occasionally creates some awkward, though comprehensible, sentences (?Also very bad was to grab two corners of the seed trays Missus had set out on a low table, and pull as hard as you could, twisting your heads, pulling, until the dirt all spilled out and the tray broke?). Their owners? attempts at training the pups bring about some wry results, as well as entertaining comments from the trainees. The strongest element of this folksy tale is the sibling rapport between the canines, a credible combination of competition and support. Dog lovers will lap this up. Ages 8-12. Copyright 2005 Reed Business Information.

Gr 3-7-Voigt's story of two animal-shelter border collies is nicely narrated by Wendy Carter. Listeners gets the point of view of the dogs' owners (Mister and Missus), but most of the telling of the story belongs to the dogs. Angus quickly becomes Mister's dog, and he does well at training. Missus understands Sadie and uses softer commands. Readers will enjoy the personalities of the various animals (sheep, barn cats, and cows) as well as the struggles the dogs have with training, storms, and missing sheep. The pace is a bit slow and adventure sparse, but the animals' personalities ring true. Young animal lovers will like how these dogs think and interact and will enjoy this sweet story.-Deb Whitbeck, West Ottawa Public Schools, Holland, MI (c) Copyright 2014. Library Journals LLC, a wholly owned subsidiary of Media Source, Inc. No redistribution permitted.

Gr. 4-6. Mister and Missus go to the animal shelter to choose a dog and come home with two mixed-breed puppies (part border collie, part shepherd, part unknown) that they name Angus and Sadie. The pups explore Mister and Missus' farm in Maine and quickly settle into their routine. Larger than his sister and quick to learn, Angus becomes the leader; Sadie, the runt of the litter and burdened by a cast on her leg, is more timid than her brother. As they grow over the next year, Angus trains hard and participates in dog trials, while Sadie shows her mettle by saving a sheep and standing up to the cats. Children who love dogs may find it fascinating to read a novel that so vividly imagines their thoughts and their communications with each other. Innocent in spirit and illustrated with several small drawings per chapter, this book will also suit younger children who are reading beyond their grade level. --Carolyn Phelan Copyright 2005 Booklist

(Intermediate) When farmers Mister and Missus decide to get a dog, they end up with two border collies: Angus, a strong, confident pup; and his sister Sadie, an endearing klutz. Together, Angus and Sadie grow up, the turning of the seasons gently governing the rhythms of life in a way that's pleasingly reminiscent of that other Maine farm sketched so thoroughly by E. B. White. Voigt, whose touch with dogs is as deft as it is with humans, limns two distinct and appealing characters, the exclamation points of puppyhood spaced more widely but not disappearing as they mature. Angus, to whom everything comes easily, defines ""weird"" as ""what's not normal.... It's what's different from me."" Sadie cheerfully accepts what life deals her, even when Angus tells her she shouldn't. When Sadie's heroic and completely unexpected rescue of a stray sheep upsets the natural order of things (as Angus sees it), it sets off a sibling crisis (as far as Angus is concerned). This crisis is resolved only after Angus realizes, ""We're not the same!... We're different!"" ""I know,"" comes Sadie's serene reply. Although Angus and Sadie may evoke Charlotte's Web, it is different -- and in literature, as in life, that'll do. (c) Copyright 2010. The Horn Book, Inc., a wholly owned subsidiary of Media Source, Inc. No redistribution permitted. All rights reserved.

This unexpectedly simple tale illustrates a year on a farm through the eyes of dogs. Mister and Missus, who want a dog for their Maine farm, adopt two shelter puppies. Mister wants a farm dog and prefers the male; Missus falls for the sweet female with a broken leg. Puppies Angus and Sadie learn about farming, discovering cats, skunks, tractors and sheep. Mister hopes to have better trained dogs than his brother, whose dog competes at trials. Angus is very clever and learns quickly, but Sadie is easily distracted by butterflies and sunbeams. Neither Sadie nor Missus mind that Sadie will never be well trained, but Angus is proud. When Sadie rescues a sheep in a snowstorm, Angus can't bear that she's praised. Incongruously--since until this point the dogs have been minimally anthropomorphized--Angus disrupts Sadie's training by barking, "stay!" when Mister says "come!" All ends well when Angus does well at trials and Missus has a baby. Sweet, with more depth than is usual in such stories, despite the dogs' unevenly human behavior. (Fiction. 8-10) Copyright ©Kirkus Reviews, used with permission.
More book reviews at iDreamBooks.com