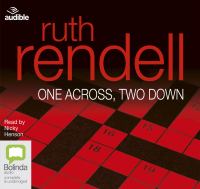 One across, two down [sound recording (audio book)] / by Ruth Rendell ; read by Nicky Henson.

There are only two things in life that interest Stanley: solving crossword puzzles, and getting his hands on his mother-in-law's money. For 20 years, nearly all his adult life, the puzzles have been his only pleasure; his mother-in-law's money his only dream. And in all those years it has never once occurred to Stanley that she would try to outsmart him and the money might never be his. Until now.It is only now that Stanley, so clever at misleading double meanings and devious clues, decides to construct a puzzle of his own - and so give death a helping hand.

Two things interest Stanley Manning: crossword puzzles, and the substantial sum his wife Vera stands to inherit when his mother-in-law dies. Otherwise, life at 61 Lanchester Road is a living hell. For she lives with them now--and she will stop at nothing to tear his marriage apart. One afternoon, Stanley lends death a helping hand. But very soon after the deed is done, he finds that his actions may cost him.