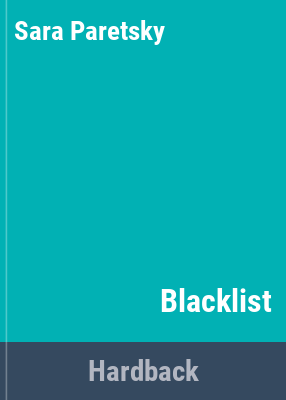 Genre/Form: Detective and mystery fiction. | Thrillers (Fiction) | Detective and mystery stories.DDC classification: 813.54 Awards: CWA Mystery Thriller Book Club Gold Dagger for Fiction, 2004.Subject: V.I. finds a dead journalist at derelict Larchmont Hall when she is called in to investigate reports of an intruder. She begins to piece together a dark puzzle that stretches back to the McCarthy years and has links to the history and intrigues of two of Chicago's most powerful families. She also finds herself involved in the case of a young boy whose possible terrorist connections make him a target in the wake of 9/11 - and not just for the US government.
Tags from this library: No tags from this library for this title. Log in to add tags.
Fiction notes: Click to open in new window

When an old woman becomes suspicious of goings on in her old home, V.I. Warsharwski is called in. A dead journalist puts her on a trail that leads back to the McCarthy era and to the distinguished Calvin Bayard. There is more than a whiff of anti-Communism and anti-Islamic hysteria in the air.

V.I. finds a dead journalist at derelict Larchmont Hall when she is called in to investigate reports of an intruder. She begins to piece together a dark puzzle that stretches back to the McCarthy years and has links to the history and intrigues of two of Chicago's most powerful families. She also finds herself involved in the case of a young boy whose possible terrorist connections make him a target in the wake of 9/11 - and not just for the US government.

V.I. Warshawski juggles two cases: that of a missing Egyptian boy (possibly a terrorist) and of a dead reporter who had been investigating McCarthy-era wrongdoing. Naturally, the two cases come together. (c) Copyright 2010. Library Journals LLC, a wholly owned subsidiary of Media Source, Inc. No redistribution permitted.

Chicago private eye V.I. ("Vic") Warshawski needs all her strength and ingenuity to deal with the tragic effects of discrimination past and present in this riveting exploration of guilt and fear, the 12th installment in Paretsky's stellar series. Longtime client Darraugh Graham asks Vic to investigate his mother Geraldine's suspicion that trespassers are living in the empty mansion her father built in the suburban Chicago enclave where she has spent most of her life. Vic literally tumbles into trouble when, upon falling into a pond on the property, she comes up clutching the hand of a dead man. He is identified as Marcus Whitby, a young African-American journalist who was writing about members of the 1930s Federal Negro Theater Project especially a beautiful Negro dancer once championed by local liberals and blacklisted during the Communist witch hunt. Hired by Marcus's sister to look into his death, Vic spans cultures and generations in her investigation. Is Benji, the young Arab student sheltered in the mansion's attic by 16-year-old Catherine Bayard (whose politically daring publisher grandfather Calvin was once Vic's hero), somehow connected? Whether or not he has terrorist ties, Benji is at risk, so after Vic finds him she persuades Father Lou, a tough but caring community activist, to hide him in spite of post-9/11 dictums. Digging deeper, Vic must face disturbing allegations about Calvin Bayard and the likelihood that her lover, Morrell, on assignment in Afghanistan, is in danger. Paretsky reminds us that although victims change, prejudice is still alive and all too well. With this top-notch offering, she earns another vote of confidence for V.I. 175,000 first printing; author tour. (Oct. 1) (c) Copyright PWxyz, LLC. All rights reserved

In her essay Writing, Speech, and Silence BKL My 1 03, Paretsky speaks frankly about free speech, including the devastation caused by the House Un-American Activities Committee (HUAC) and the implications of the recent Patriot Act on individual freedoms. The topic is central to her latest V. I. Warshawski mystery, a stellar entry in a celebrated series, which offers a provocative history lesson along with very contemporary commentary on loyalty and betrayal and how the past shapes the present. Paretsky picks up where Total Recall (2001) left off: Warshawshi's love interest, Morell, is unreachable in war-torn Afghanistan, leaving an anxious V. I. to throw herself into her work. Departing from her familiar Chicago territory for the city's suburbs, she takes a case for a cranky regular client whose mother, living in a retirement community bordering on an estate once owned by the family, sees lights at night in the empty mansion. When V. I. investigates, she comes across a teenage girl prowling around the property and gives chase, only to stumble, literally, upon a dead man. As puzzles make her curious (even when they're not my business ), V. I. is off and running. A tightly woven and thoughtful thriller, this enticing mix of history and mystery showcases sharp, clever, vulnerable V. I. at her best. --Stephanie Zvirin Copyright 2003 Booklist

Paretsky exploits post-9/11 paranoia to take up for the little guy once more, as V.I. Warshawski gets her First Amendment rights stomped while fencing with obstructive witnesses and unreliable clients. As her lover Morrell fights the good fight in Afghanistan, Warshawski (Total Recall, 2001, etc.) fancies herself a 20th-century Penelope with a p.i. license. She uses it to investigate longtime corporate client Darraugh Graham's 90-year-old mother's complaint that she sees lights from her nursing home window in long-abandoned Larchmont Hall next door. The first thing Vic finds is a scared teenager--Catherine Bayard, granddaughter of publishing giant Calvin Bayard and his wife Renee, who along with Geraldine and MacKenzie Graham formed the foundation of enlightened but proper society in old-money New Solway--whose journey down the politically progressive path of her grandparents has landed her in big trouble. The second is a dead reporter: Marc Whitby, who'd been working a story on dancer Kylie Ballantine, a casualty of Olin Taverner's 1950s witch hunt, for T-Square, a magazine by and for young African-Americans. Soon Vic has a new client--Harriet Whitby, who thinks that the DuPage county coroner's verdict of suicide is bunk--and she's wanted by the FBI and the cops in two jurisdictions, her apartment ransacked, and her phone bugged, all for treading on the wrong toes. Paretsky emphasizes the political but doesn't neglect the personal here: a compelling tale of secrets that can't stay buried. Copyright ©Kirkus Reviews, used with permission.
More book reviews at iDreamBooks.com