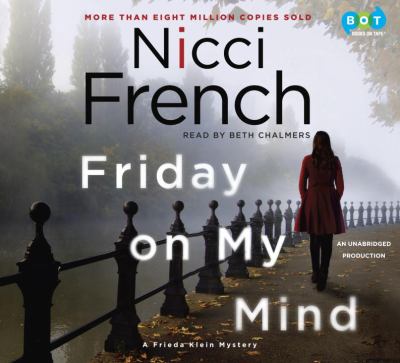 Friday on my mind / Nicci French ; read by Beth Chalmers.

DDC classification: 823/.914 Read by Beth Chalmers.Summary: London psychotherapist Frieda Klein goes on the run to save herself and uncover the truth after a bloated corpse with a slashed throat is found in the Thames and she becomes the prime supect for the murder. While she is certain that the man who has never stopped haunting her, Dean Reeve, is responsible for the death of her ex-boyfriend Sandy, the police think that he has been dead for years.
Fiction notes: Click to open in new window
Total holds: 0

In Nicci's French's thrilling fifth book, London psychotherapist Frieda Klein herself becomes the prime suspect in a murder <p> A bloated corpse turns up in the Thames, throat slashed, and the only clue is a hospital wristband reading Dr. F. Klein . Frieda is taken to see the body and realizes with horror that it is Sandy, her ex-boyfriend. She's certain that the killer is Dean Reeve--the man who has never stopped haunting her. But the police think he has been dead for years, and Frieda is their number one suspect. With few options, Frieda goes on the run to save herself and try to uncover the truth. <p> Praise for the Frieda Klein Mystery series: <br> <br> "Fierce, fascinating, and full of insight, Frieda Klein is irresistible." -- Val McDermid, bestselling author of Splinter the Silence <p> "Sophisticated, gripping, addictive. Crime novels that stand head and shoulders above the competition." -- Sophie Hannah, bestselling author of Woman with a Secret <br> <br> "Complex psychological suspense at its best." -- Booklist (starred review)

Title from web page and container.

London psychotherapist Frieda Klein goes on the run to save herself and uncover the truth after a bloated corpse with a slashed throat is found in the Thames and she becomes the prime supect for the murder. While she is certain that the man who has never stopped haunting her, Dean Reeve, is responsible for the death of her ex-boyfriend Sandy, the police think that he has been dead for years.

Married author team Nicci Gerrard and Sean French begin the fifth "Frieda Klein" book (after Thursday's Children) with DCI Sarah Hussien connecting a waterlogged body found on the shore of the Thames River to psychotherapist Dr. Klein. As the police begin to question Frieda's motives and state of mind, she is forced to go on the run and into hiding while she investigates the victim's past. Several twists and misplaced suspicions almost derail Frieda's parallel investigation. The police are nipping at her heels as the tension builds, and readers will be enthralled until the final page. VERDICT This intricate psychological drama presents various viewpoints as to the identity of the murderer. Series fans will savor this latest addition, but newbies who admire Patricia Cornwell's medical examiner Kay Scarpetta will find Frieda's self--reliance, logic, and -intelligence -comparable. [See Prepub Alert, 4/10/16.]-Susan Carr, Edwardsville P.L., IL © Copyright 2016. Library Journals LLC, a wholly owned subsidiary of Media Source, Inc. No redistribution permitted.

Crisp prose and an intriguing main character distinguish French's strong fifth mystery featuring London psychotherapist Frieda Klein (after 2015's Thursday's Child). A hospital ID band with Frieda's name on it is found on the wrist of a man floating in the Thames with his throat cut. Asked by the police to identify the man, Frieda is stunned to discover that he's a former lover, Sandy Holland, who harassed her for months after their breakup. Frieda suspects Dean Reeve-a man who stalked her for years-of the murder, but the police think Reeve died years ago. When additional evidence links Frieda to Holland's murder, certain members of the police force are all too willing to believe her guilty. As the prime suspect, Klein determines the only chance of clearing her name is to disappear and search for the real culprit. A twisting series of events lead Klein to be face to face with the killer in a powerful ending. Nicci French is the pseudonym for Sean French and Nicci Gerrard, a husband-and-wife writing team. Agent: Joy Harris, Joy Harris Literary Agency. (Oct.) © Copyright PWxyz, LLC. All rights reserved.

Writing duo Nicci Gerrard and Sean French return with a fifth psychological thriller starring London psychotherapist Frieda Klein (following Thursday's Children, 2016). Prickly and brutally honest, Frieda has made enemies, especially among the investigators and fellow psychotherapists she's humiliated while consulting on high-profile cases. So, when Frieda's ex-boyfriend Sandy is murdered, her detractors finger her as a suspect. Could it be, Frieda wonders, that presumed-dead serial-killer Dean Reeve, who was obsessed with her, is really alive and killed Sandy as a kind of twisted revenge against the man who broke Sandy's heart? Hoping to smoke Dean out or find another suspect, Frieda goes underground in a series of down-market bolt-holes and hunts for clues within Sandy's university social circle. As atmospheric and anxiety-­ridden as the earlier Klein novels, this entry offers series-shifting character development as emotionally reserved Frieda ponders her relationships while observing her friends court danger for her sake. This series' mix of psychological suspense and social commentary makes it a great shelfmate for Scandinavian thrillers, like those of Camilla Lackberg and Karin Fossum.--Tran, Christine Copyright 2016 Booklist

Can psychotherapist Frieda Klein possibly get in any worse with the members of London's Metropolitan Police whose patience with her has already worn thin? Yes, she canwhen the evidence marks her as a murderer.By the time his corpse is fished out of the Thames, neurologist Alexander Holland is scarcely identifiable. But a hospital bracelet hes wearing labeled Dr. F. Klein leads DCI Sarah Hussein and DC Glen Bryant to Frieda, and she makes the dry-eyed identification. Asked why one of her former patients would be wearing her bracelet when he got his throat cut, she reluctantly acknowledges over several interrogations that Sandy Holland was more than her patient; he was a former lover who wouldnt accept their breakup and kept calling her with the persistence of a stalker. Since Frieda maintains that shes already being stalked by murderous Dean Reeve (Thursdays Children, 2016, etc.), who she insists must have killed Sandy, Hussein and Bryant think this sounds like an awful lot of stalkers, and when Sandys wallet turns up in her dresser drawer, they prepare to arrest her. Instead of turning herself in, however, Frieda takes it on the lam, going to ground in a burrow arranged by her friend Josef Morozov, a Ukrainian builder with contacts from here to Kiev. At first determined to gather evidence against Reeve, she gets a momentary jolt when the timetable for Sandys murder indicates that Reeve cant have killed him but smoothly switches gears, masquerading as the worlds most improbable nanny in order to snoop into the private lives of Sandys other friends, a disconcerting number of whom turn out to be former lovers as well, until she shakes one tree too many and the killer appears in her path. Frenchs strikingly mature prose purrs along as smoothly as ever, but the mystery is a mess from beginning to end, and the heroines tough/imperiled shtick is beginning to wear thin. For loyalists only. Copyright Kirkus Reviews, used with permission.
More book reviews at iDreamBooks.com