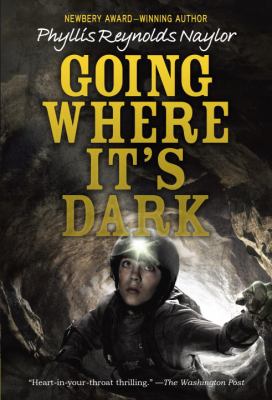 From the Newbery Award-winning author of Shiloh comes a middle-grade novel that combines adrenaline-fueled adventure with a poignant coming-of-age story.

Buck Anderson's life seems to be changing completely. His best friend, David, has moved away; his anxious parents are hounding him more than ever; he has reluctantly agreed to fill in for his uncle and do odd jobs for a grumpy old veteran in town; and his twin sister has a new boyfriend and is never around anymore. To top it all off, Buck is bullied by a group of boys at school-mainly because he stutters.

There is one thing that frees Buck from his worries. It is the heart-pounding exhilaration he feels when exploring underground caves in and around his hometown. He used to go caving with David, but he's determined to continue on his own now. He doesn't know that more changes are headed his way-changes that just might make him rethink his view of the world and his place in it.

Praise for GOING WHERE IT'S DARK

"A well-constructed and well-paced story that will be appreciated by anyone who has ever felt out of place or bullied." - School Library Journal

"Buck's strength is inspirational, and his family's love and respect are heartwarming." - Kirkus Reviews

"A coming-of-age novel about a boy whose daily life is difficult because he stutters but who discovers enormous courage when he goes on heart-pounding cave adventures." -- Provided by publisher.

It troubles 13-year-old Buck Anderson that he's keeping his family in the dark about key facets of his life. Buck is being bullied because he stutters; an elderly neighbor, a former speech pathologist, is working with him to reduce his stuttering; and he has discovered a hole in the countryside that leads to a network of underground tunnels, which he has explored alone-breaking the cardinal rule of caving. The smallest kid in seventh grade, Buck has felt friendless ever since David, his best friend and fellow caver, left their rural Virginia town. Naylor (the Alice series) juggles these plot elements with aplomb, keeping the novel's adventure component alive while exploring Buck's angst, eroding self-esteem, anger, and strained relationship with his well-intentioned if sometimes misguided family. In the story's most harrowing sequence, Naylor brings the book's themes together when bullies abandon Buck in a deep pit, and he has to rely on his caving know-how to save himself. Writing with characteristic sensitivity, Naylor delivers an engrossing account of a boy's interior and exterior struggles. Ages 10-up. (Jan.) © Copyright PWxyz, LLC. All rights reserved.

Gr 5-8-Naylor's writing, including her "Shiloh" quartet and the "Alice" series, is lauded for its approachability and sincerity. Her latest book is no exception. A boy named Buck Anderson is mostly friendless and bullied because of his stutter. After learning about caves in school, Buck and his best friend David become obsessed. But since David moved away, Buck has been forced to explore by himself. He finds a hole that he desperately wants to explore, but he knows that it's dangerous. And Buck has other things keeping him from exploring his discovery. His uncle makes him do household chores for an angry veteran named Jacob. His mother tries to cure his stutter by taking him to a religious revival. And his twin sister is preoccupied with her new boyfriend. Buck's story begins with a general mood of hopelessness. Slowly but surely, Naylor pokes holes into the darkness, and rays of hope shine through. This is a triumphant tale, but happiness is hard-won. Those who related to or enjoyed Vince Vawter's Paperboy (Delacorte, 2013) will find this a contemporary counterpart. VERDICT Naylor offers a well-constructed and well-paced story that will be appreciated by anyone who has ever felt out of place or bullied.-Jessica Ko, Los Angeles Public Library © Copyright 2015. Library Journals LLC, a wholly owned subsidiary of Media Source, Inc. No redistribution permitted.

Buck's best friend in the world has moved hundreds of miles away. Buck has a hard time making friends due to his stutter, and David was one of the few people who was patient as he listened to Buck's struggles to get out sentences. The class bully continues to taunt Buck because of his speech impediment, issuing a threat Buck is certain the bully will make real. But a job helping out an elderly neighbor and the accidental discovery of an entrance to a cave might just make summer better than Buck had expected. Naylor's novel pulls off a nifty, unusual feat, combining survival in the wilderness with survival in the world of bullies, so Buck's journeys to combat his stuttering and his nemesis parallel his quest to explore the newly discovered cave. This is the rare book you could give to readers of both Vince Vawter's Paperboy (2013) and fans of survivalist adventures by Gary Paulsen.--Lesesne, Teri Copyright 2015 Booklist

Thirteen-year-old rural-Virginia boy Buck's best friend, David, has moved away; Buck is bullied at school for his stuttering problems; and, in typical preteen fashion, his family gets on his nerves. Buck's passion is caving, but a cruel prank quickly turns this hobby into a harrowing survival adventure. Naylor, as always, is deft at combining action, dialogue, and theme in a compelling package. (c) Copyright 2016. The Horn Book, Inc., a wholly owned subsidiary of Media Source, Inc. No redistribution permitted.

Thirteen-year-old Buck Anderson knows the dangers of exploring underground caves alone, but when he discovers a new hole in the ground, it proves too tempting to resist. Buck hates keeping secrets from his family, but he knows they would never understand his obsession with caving. And unfortunately, the only person who would is his friend David, who has recently moved away. When his uncle asks him to look in on a curmudgeonly neighbor, Buck reluctantly agrees, thinking he can use the extra money for the caving equipment he needs. However, the new connection proves to be more than a paycheck. The retired doctor tells Buck he might be able to cure the boy of his stuttering, something Buck can barely imagine. Unfortunately his stutter is only part of the problem. When he sticks up for himself against the school bully, the retribution is swift and potentially deadly. Buck's hidden talents may be his only chance at survival. Naylor's signature ability to coax profound truths out of ordinary characters and familiar events shines, and she avoids supplying easy answers. Change is hard. Familial relationships are complicated. And healing takes time. Buck's strength is inspirational, and his family's love and respect are heartwarming. (Fiction. 8-12) Copyright Kirkus Reviews, used with permission.
More book reviews at iDreamBooks.com