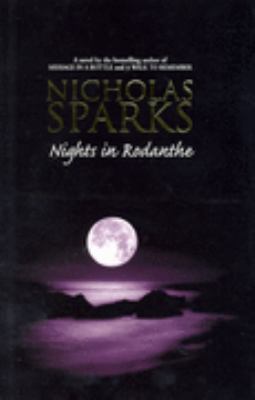 Genre/Form: Domestic fiction.DDC classification: 813.54 Summary: Adrienne Willis is abandoned by her husband for a younger woman. She agrees to tend an inn at Rodanthe, North Carolina and meets Paul Flanner, a 54 doctor who has just sold his practice. A major storm starts moving in and they turn to each other for comfort.
Tags from this library: No tags from this library for this title. Log in to add tags.
Fiction notes: Click to open in new window

For use in schools and libraries only. After her husband leaves her, 45-year-old Adrienne Willis reconsiders her life, until a trip to Rodanthe leads her to an encounter with surgeon Paul Flanner.

Adrienne Willis is abandoned by her husband for a younger woman. She agrees to tend an inn at Rodanthe, North Carolina and meets Paul Flanner, a 54 doctor who has just sold his practice. A major storm starts moving in and they turn to each other for comfort.

Sparks (A Bend in the Road, etc.) logs more miles on the winding high road of romance with the story of two middle-aged people who meet by chance in the small North Carolina coastal town of Rodanthe. The impassioned but doomed romance seems to owe much to Robert James Waller's The Bridges of Madison County. Once again, a housewife who has focused on everyone but herself indulges in a brief, intense, secret affair with a stranger who changes her life forever. As the story begins, Adrienne Willis is 60, the divorced mother of three grown children. To help her troubled daughter cope with the untimely recent death of her husband, Adrienne tells her the tale of her love affair, which took place 15 years before. At the time, Adrienne was an uptight matron whose ex-husband had just left her for a younger woman. This rejection colors her entire life, and Sparks realistically portrays a vulnerable and isolated woman who throws herself into raising her children to escape her despair. Paul Flanner, her paramour, is a surgeon and an obsessive workaholic with no genuine connection to his wife or son, whose world completely falls apart when one of his patients inexplicably dies. Sparks builds a taut, plausible relationship between his protagonists, but even fans may be irked by the obviousness of their story and the inevitability of their fate. Agent, Theresa Park. (Sept. 18) Forecast: The obvious echoes of The Bridges of Madison County are more likely to hurt this title than help it, but Sparks has a proven track record, and major television and print advertising and a 25-city author tour should inflate sales. (c) Copyright PWxyz, LLC. All rights reserved

Sparks, popular author of several romantically themed best-sellers, including Message in a Bottle (1998), is back at it with his latest mix of love story and pathos. He doesn't disappoint, whipping up plenty of melodrama in the story of two shattered people, both badly scarred by past experiences, who find each other late in life and realize they are soul mates. Adrienne Willis is a 45-year-old mother of three whose husband recently abandoned her for a younger woman. When she visits the small coastal town of Rodanthe, North Carolina, seeking a bit of respite from her problems, she meets Paul Flanner, a 54-year-old doctor who has sold his thriving medical practice and come to Rodanthe to escape his own tortured past. Despite their short courtship, the two find themselves falling madly and passionately in love and vow to spend their lives together. Unfortunately, Paul needs to make amends with the son he has long neglected and so embarks on an ill-fated trip, which leads to heartbreak. Sparks has a very solid fan base, and they will be clamoring for his latest. --Kathleen Hughes

A mother unburdens a story of past romance to her troubled daughter for no good reason. Adrienne Willis is a middle-aged mother with three kids who, not surprisingly, finds herself in an emotional lurch after her husband dumps her for a younger, prettier thing. Needing to recharge her batteries, Adrienne takes a holiday, watching over her friend's small bed-and-breakfast in the North Carolina beach town of Rodanthe. Then Dr. Paul Flanner appears, himself a cold fish in need of a little warming up. This is the scene laid out by Adrienne to her daughter, Amanda, in a framing device of unusual crudity from Sparks (A Bend in the Road, 2001, etc.). Amanda's husband has recently died and she hasn't quite gotten around to figuring out how to keep on living. Imagining that nothing is better for a broken heart than somebody else's sad story, Adrienne tells her daughter about the great lost love of her life. Paul came to Rodanthe in order to speak with the bereaved family of a woman who had just died after he had operated on her. Paul, of course, was not to blame, but still he suffers inside. Add to that a recent divorce and an estranged child and the result is a tortured soul whom Adrienne finds absolutely irresistible. Of course, the beach, an impending storm, the fact that there are no other visitors around, a roaring fireplace, and any number of moments that could have been culled from a J. Crew catalogue and a Folgers's commercial make romance just about inevitable. Sparks couldn't be less subtle in this harshly mechanical story that adheres to formula in a way that would make an assembly-line romance writer blush. Short, to the point, and absolutely unremarkable: sure to be another medium-hot romance-lite hit for Sparks, who at the very least can never be accused of overstaying his welcome.
More book reviews at iDreamBooks.com