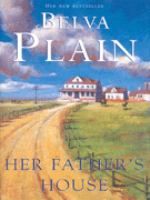 DDC classification: 813.54 Summary: A fathers love has far-reaching effects when he takes his obsession too far.
Fiction notes: Click to open in new window
Total holds: 0

Beloved storyteller Belva Plain understands the rich tapestry of the human heart like no other. Her many dazzling "New York Times" bestsellers probe the shifting bonds of marriage and family with insight, compassion, and uncommon grace. And her new novel is no exception. A tale of fathers and daughters, lovers and families, acts of love and acts of betrayal, Her Father's House is Belva Plain's most powerful and unforgettable novel yet. <br>It is the spring of 1968 when Donald Wolfe, a young graduate of a midwestern law school, arrives in New York. Filled with ambition and idealism, he is dazzled not only by the big city but by the vivacious, restless Lillian, whom he marries in the heat of infatuation. <br>Surely theirs is no marriage made in heaven, but they have a child, Tina, and she is the love of Donald's heart. For her he would give up everything--his home, his distinguished career, and his freedom. When his flawed marriage begins to fail, a choice must be made. Shall he consider a step that would force him into flight and a life of hiding? <br>From her earliest years, Tina is exceptional, a brilliant student and a joyous, loving spirit. At the university she falls in love with Gilbert, who graduates from law school just as she is about to enter medical school. Together they go to New York, where she learns the truth about her family's past, a truth that must change her regard for the father who has protected and cherished her. When a terrible lie has been told out of love, can it be forgiven? <br>With courage and compassion, Belva Plain paints a moving portrait of the choices that shape the course of our lives, the secrets that haunt us, and the love that helps us heal and move on. It is a work of riveting storytelling and rare emotional power by one of the most gifted novelists of our time. <p>"From the Hardcover edition."

A fathers love has far-reaching effects when he takes his obsession too far.

Is it kidnapping when a father steals his cherished daughter away from a destructive and unstable mother? Plain's heroine, now a grown woman, must decide for herself. (c) Copyright 2010. Library Journals LLC, a wholly owned subsidiary of Media Source, Inc. No redistribution permitted.

Usually a crowd-pleaser, Plain (Looking Back, etc.) sleepwalks through her latest novel, in which old-fashioned style clashes uncomfortably with contemporary content. Donald Wolfe, a 25-year-old North Dakota native, comes to New York City in 1968 to practice law; five years later, he meets and falls for the captivating Lillian Morris. Marrying in haste, he repents big time when Lillian reveals herself to be disturbingly erratic. After she becomes pregnant, the two divorce, but when Donald judges his daughter, Bettina, to be neglected, he kidnaps her. Taking to the road, he invents a new past for himself and adopts the name Jim, renaming his daughter Laura. Many years later, the truth is revealed and Jim stands trial for kidnapping. Will Laura, now a young woman, be able to forgive her father his deception, which he claims was for her own good? An unbelievably nave attitude on the part of young Donald and creakingly stilted dialogue all around make it difficult to suspend disbelief; meanwhile, the dated language will have readers expecting descriptions of porkpie hats. Preachy double standards regarding parenting will be unappreciated by modern readers, and there are a few glaring anachronisms (music CDs in the '70s?). When Donald/Jim, sanctimonious from start to finish, asserts late in the novel that "Running away is never the answer," readers will rightly wonder whether this man has been paying attention to his own life story. More importantly, has the author? A pass, even for completists. National advertising. (Aug. 6) (c) Copyright PWxyz, LLC. All rights reserved

Plain has a knack for placing her characters in impossible situations, and her latest novel is no different. Donald Wolfe, a young lawyer practicing in New York in 1968, is smitten when he meets Lillian Morris. Lillian is beautiful, sophisticated, and intelligent and seems to be a perfect match for Donald. When they marry, Donald finally experiences happiness. But, gradually, Lillian's desire to move in the highest social circles and her growing indifference toward their marriage drive a wedge between the pair. Even the news that Lillian is pregnant doesn't bring them closer, and after a devastating trip to Italy, they part ways. Lillian remarries, and Donald sees the baby--a girl named Bettina--with increasing frequency, until Lillian's second marriage breaks up and she starts planning to leave the country with her lover. Desperate not to lose his child, Donald concocts a plan to take Bettina and flee the state. He obtains false names for them--Jim and Laura Fuller--and absconds to Georgia, where he and Laura find refuge in a small town. Although he only wants to stay for a few weeks, a new love offers him the chance to start over. Will Donald's past catch up with him and his daughter? Plain's loyal readers know it's bound to, and they'll be eagerly and quickly turning the pages of the novel to find out how it all unfolds. --Kristine Huntley

A divorced father, fearing the influence of his ruthlessly social-climbing ex, kidnaps his baby daughter and heads to the hills--until his past and the police catch up. Brilliant lawyer Donald Wolf is a straight-arrow kind of guy and a romantic soul who wants to marry and have kids. An associate in a leading New York firm, he thinks that in Lillian, a legal secretary who loves art, he's met the perfect woman. While Lillian is curiously reticent about her family and past, Donald is too smitten to ask questions. Nor is he particularly curious when Mr. Buzley, her boss, gives them a lavish wedding gift. Once married, Lillian spends money freely and befriends the rich couple who live in the penthouse. Next she's dragging Donald to glamorous parties and complaining they don't have enough money. When she gets pregnant, they decide to take a trip to Italy, where Lillian studied art and where Donald, already tired of Lillian's greedy ways, learns more about her past--not good--and asks for a divorce. Lillian gives birth to daughter Bettina, and, now married to Mr. Buzley, lives in style. But soon Donald, who sees Bettina regularly in the park with her nanny, learns that Lillian is cheating on Buzley. An accident involving Bettina convinces Donald that life with Lillian would be bad for her, and he so kidnaps the two-year-old, takes a false name, and heads for a small hill-town in Georgia, where years pass, he becomes a respected citizen, and makes himself helpful to ailing farmer Clarence Benson, his pretty wife Kate, and their young son Rick. Aware that the police are looking for him, Donald never leaves town, but his past catches up with him when he goes to Bettina's college graduation. His life unravels as lies and secrets come to light--but this is Belva Plain (Looking Back, 2001, etc. etc.), and happiness lies ahead. Plain reading: no troubling shadings to complicate or disturb. Copyright ©Kirkus Reviews, used with permission.