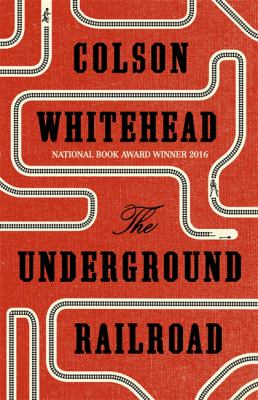 DDC classification: 813/.6 Awards: National Book Awards (USA) : Fiction Winner 2016. | Andrew Carnegie Medal (USA) : Fiction Winner 2017. | The Pulitzer Prize (US) : Fiction, Winner 2017.Summary: Cora is a slave on a cotton plantation in Georgia. When Caesar, a recent arrival from Virginia, tells her about the Underground Railroad, they decide to take a terrifying risk and escape. Though they manage to find a station and head north, they are being hunted. Their first stop is South Carolina, in a city that initially seems like a haven. But the city's placid surface masks an insidious scheme designed for its black denizens. And even worse: Ridgeway, the relentless slave catcher, is close on their heels.
List(s) this item appears in: 9. Your Best Reads of 2017
Tags from this library: No tags from this library for this title. Log in to add tags.
Total holds: 0

Cora is a slave on a cotton plantation in Georgia. All the slaves lead a hellish existence, but Cora has it worse than most; she is an outcast even among her fellow Africans and she is approaching womanhood, where it is clear even greater pain awaits. When Caesar, a slave recently arrived from Virginia, tells her about the Underground Railroad, they take the perilous decision to escape to the North. In Whitehead's razor-sharp imagining of the antebellum South, the Underground Railroad has assumed a physical form: a dilapidated box car pulled along subterranean tracks by a steam locomotive, picking up fugitives wherever it can. Cora and Caesar's first stop is South Carolina, in a city that initially seems like a haven. But its placid surface masks an infernal scheme designed for its unknowing black inhabitants. And even worse: Ridgeway, the relentless slave catcher sent to find Cora, is close on their heels. Forced to flee again, Cora embarks on a harrowing flight, state by state, seeking true freedom. At each stop on her journey, Cora encounters a different world. As Whitehead brilliantly recreates the unique terrors for black people in the pre-Civil War era, his narrative seamlessly weaves the saga of America, from the brutal importation of Africans to the unfulfilled promises of the present day. The Underground Railroad is at once the story of one woman's ferocious will to escape the horrors of bondage and a shatteringly powerful meditation on history.

Cora is a slave on a cotton plantation in Georgia. When Caesar, a recent arrival from Virginia, tells her about the Underground Railroad, they decide to take a terrifying risk and escape. Though they manage to find a station and head north, they are being hunted. Their first stop is South Carolina, in a city that initially seems like a haven. But the city's placid surface masks an insidious scheme designed for its black denizens. And even worse: Ridgeway, the relentless slave catcher, is close on their heels.

Cora, a slave on a plantation in Georgia, seeks her freedom on a demimythical version of the underground railroad. The railroad is portrayed quite literally, and -Cora's journey encapsulates the struggle for emancipation and civil rights and against Jim Crow and segregation, all of which is symbolized by the societies of the various states in which her train stops. As she travels, Cora's identity evolves from outcast to object to secret sin to prisoner and, finally, to a member of a community. She is pursued by slave catcher Ridgeway as one by one her allies and friends are taken from her in violence and blood. Whitehead's characters bridge the symbolism the story demands and the realism of complicated people. Narrator Bahni Turpin is able to differentiate among the many characters and lends a flowing cadence to the dark and savage tale. -Verdict A powerful story both of a woman and of a people. Highly recommended for readers of literary fiction, historical fiction, American history, and African American literature. ["A highly recommended work that raises the bar for fiction addressing slavery": LJ 7/16 starred review of the Knopf hc.]-Tristan M. Boyd, Austin, TX © Copyright 2016. Library Journals LLC, a wholly owned subsidiary of Media Source, Inc. No redistribution permitted.

Each thing had a value.... In America the quirk was that people were things." So observes Ajarry, taken from Africa as a girl in the mid-18th century to be sold and resold and sold again. She finally arrives at the vicious Georgia plantation where she dies at the book's outset. After a lifetime in brutal, humiliating transit, Ajarry was determined to stay put in Georgia, and so is her granddaughter, Cora. That changes when Cora is raped and beaten by the plantation's owner, and she resolves to escape. In powerful, precise prose, at once spellbinding and ferocious, the book follows Cora's incredible journey north, step by step. In Whitehead's rendering, the Underground Railroad of the early 19th century is a literal subterranean tunnel with tracks, trains, and conductors, ferrying runaways into darkness and, occasionally, into light. Interspersed throughout the central narrative of Cora's flight are short chapters expanding on some of the lives of those she encounters. These include brief portraits of the slave catcher who hunts her, a doctor who examines her in South Carolina, and her mother, whose escape from the plantation when Cora was a girl has both haunted and galvanized her. Throughout the book, Cora faces unthinkable horrors, and her survival depends entirely on her resilience. The story is literature at its finest and history at its most barbaric. Would that this novel were required reading for every American citizen. Agent: Nicole Aragi, Aragi Inc. (Sept.) © Copyright PWxyz, LLC. All rights reserved.

*Starred Review* Over the course of his previous five novels, Whitehead (Zone One, 2011) has conducted an imaginative, droll, and eviscerating inquiry into the blurred divide between American mythology and American history, especially the camouflaged truth about racism. In this magnetizing and wrenching saga, Whitehead tells the story of smart and resilient Cora, a young third-generation slave on a Georgia cotton plantation where she has been brutally attacked by whites and blacks. Certain that the horror will only get worse, she flees with a young man who knows how to reach the Underground Railroad. Everything Whitehead describes is vividly, often joltinglyrealistic, even the novel's most fantastic element, his vision of this secret transport network as an actual railroad running through tunnels dug beneath the blood-soaked fields of the South, a jolting and resounding embodiment of heroic efforts and colossal risks. Yet for all that sacrifice and ingenuity, freedom proves miserably elusive. A South Carolina town appears to be welcoming until Cora discovers that it is all a facade, concealing quasi-medical genocidal schemes. With a notoriously relentless slave catcher following close behind, Cora endures another terrifying underground journey, arriving in North Carolina, where the corpses of tortured black people hang on the trees along a road whites call the Freedom Trail. Each stop Cora makes along the Underground Railroad reveals another shocking and malignant symptom of a country riven by catastrophic conflicts, a poisonous moral crisis, and diabolical violence. Each galvanizing scene blazes with terror and indictment as Whitehead tracks the consequences of the old American imperative to seize, enslave, and profit. Stolen bodies working stolen land. It was an engine that did not stop, its hungry boiler fed with blood. With each compelling character, some based on historical figures, most born of empathic invention, Whitehead takes measure of the personal traumas and mass psychosis that burn still within our national consciousness. Hard-driving, laser-sharp, artistically superlative, and deeply compassionate, Whitehead's unforgettable odyssey adds a clarion new facet to the literature of racial tyranny and liberation.--Seaman, Donna Copyright 2016 Booklist

What if the metaphorical Underground Railroad had been an actualunderground railroad, complete with steam locomotive pulling a "dilapidated box car" along a subterranean nexus of steel tracks? For roughly its first 60 pages, this novel behaves like a prelude to a slave narrative which is, at once, more jolting and sepulchral than the classic firsthand accounts of William Wells Brown and Solomon Northup. Its protagonist, Cora, is among several African-American men and women enslaved on a Georgia plantation and facing a spectrum of savage indignities to their bodies and souls. A way out materializes in the form of an educated slave named Caesar, who tells her about an underground railroad that can deliver her and others northward to freedom. So far, so familiar. But Whitehead, whose eclectic body of work encompasses novels (Zone One, 2011, etc.) playing fast and loose with "real life," both past and present, fires his most daring change-up yet by giving the underground railroad physical form. This train conveys Cora, Caesar, and other escapees first to a South Carolina also historically unrecognizable with its skyscrapers and its seemingly, if microscopically, more liberal attitude toward black people. Compared with Georgia, though, the place seems so much easier that Cora and Caesar are tempted to remain, until more sinister plans for the ex-slaves' destiny reveal themselves. So it's back on the train and on to several more stops: in North Carolina, where they've not only abolished slavery, but are intent on abolishing black people, too; through a barren, more forbidding Tennessee; on to a (seemingly) more hospitable Indiana, and restlessly onward. With each stop, a slave catcher named Ridgeway, dispensing long-winded rationales for his wicked calling, doggedly pursues Cora and her diminishing company of refugees. And with every change of venue, Cora discovers anew that "freedom was a thing that shifted as you looked at it, the way a forest is dense with trees up close but from outside, the empty meadow, you see its true limits." Imagine a runaway slave novel written with Joseph Heller's deadpan voice leasing both Frederick Douglass' grim realities and H.P. Lovecraft's rococo fantasiesand that's when you begin to understand how startlingly original this book is. Whitehead continues the African-American artists' inquiry into race mythology and history with rousing audacity and razor-sharp ingenuity; he is now assuredly a writer of the first rank. Copyright Kirkus Reviews, used with permission.
More book reviews at iDreamBooks.com