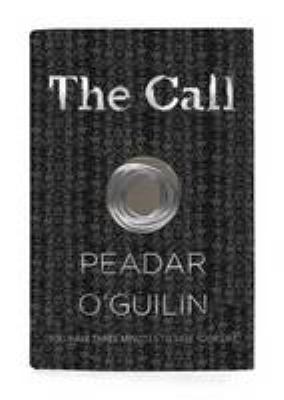 DDC classification: 823.92 Summary: For the last twenty-five years every teenager in Ireland has been subject to "the call" which takes them away to the land of the Sídhe, where they are hunted for twenty four hours (though only three minutes pass in this world)--handicapped by her twisted legs, Nessa Doherty knows that very few return alive, but she is determined to be one of them.
Tags from this library: No tags from this library for this title. Log in to add tags.
Fiction notes: Click to open in new window

What if you only had three minutes to save your life and the clock is already counting down. Three minutes: you wake up alone in a horrible land. A horn sounds. You realize you've been Called. Two minutes: they're getting closer and despite all your training you're exhausted, you can't see anywhere to hide. One minute: you're glad you can run. Nessa can't, her polio twisted legs mean she'll never survive her Call, will she? Suddenly, a hand grabs your wrist and it's more painful than anything you have ever experienced before in your life..... Time's up. Could you survive The Call?

For the last twenty-five years every teenager in Ireland has been subject to "the call" which takes them away to the land of the Sídhe, where they are hunted for twenty four hours (though only three minutes pass in this world)--handicapped by her twisted legs, Nessa Doherty knows that very few return alive, but she is determined to be one of them.

This intense, riveting tale is set in an Ireland that the Sídhe, Irish faeries, have cut off from the rest of the world, plotting to retake their former home through a grim war of attrition that involves kidnapping human teenagers. During the "Call," teens disappear "for a little over three minutes, but in [the faeries'] world, the Grey Land, an entire day has passed, panic and pain in every second of it." When the stolen teens reappear, they are usually dead and/or horribly mutated by magic. All Irish children attend special centers where they're taught martial arts, the Sídhe language, and total ruthlessness. Nessa, already relegated to crutches due to polio (Ireland's isolation means no imported vaccines-or anything else), seems unlikely to survive her Call, but has dedicated everything to doing so. O'Guilin (The Inferior) follows several teens, including Nessa, over into the Grey Land, delivering blisteringly fast-paced and graphic descriptions of the tortures the children endure. This is a bleak, gripping story, one where only the most muted of happy endings is possible. Ages 14-up. (Aug.) © Copyright PWxyz, LLC. All rights reserved.

Gr 9 Up-Set in Ireland, this fantasy horror novel introduces readers to a freaky reality: at any given time, on any given day, a teen's world will go black, and when her senses return, she realizes she is naked and alone. She has been Called to the Grey Land. Nessa, a 14-year-old girl living with the aftereffects of polio, and her best friend Megan attend Boyle Survival College to prepare themselves for their Call. At this boarding school, they learn about the fairy enemies (the Sidhe, based on traditional Irish folklore) and practice survival and defensive techniques. The students who have lived through the Call return disfigured and emotionally broken, but it is through their accounts that others can prepare for the torture they face. Nessa works her hardest so that her limited mobility does not become a deterrent to her survival. Amid a colorful cast of supporting characters-including Anto, her pacifist love interest, and Connor, the egotistical bully-the dangers facing Nessa aren't limited to just those that await her in the Grey Land. The third-person narrative allows readers to identify with each of the characters. The Irish vernacular and vivid descriptions place teens in the heart of the island. Horror fans will love the grotesque world of Sidhe, where monsters and animals are made from twisted human bodies and body parts. Nessa is a resourceful character, often inventing creative ways to survive the same obstacles as her peers in order to prepare herself for the Call. The novel's strengths are its strong imagery and diverse cast of characters, who represent different ethnicities and sexual identities. However, the denouement is too quick and underdeveloped. The language, sex, violence, and world of the Grey Land are more appropriate for mature fantasy fans. VERDICT For those craving a new Hunger Games-esque thriller.-Stephanie DeVincentis, Downers Grove North High School, IL © Copyright 2016. Library Journals LLC, a wholly owned subsidiary of Media Source, Inc. No redistribution permitted.

Thousands of years ago, the Irish banished the Aes Sídhe (literally, People of the Mounds) to the colorless Grey Land for all eternity. For the past 25 years, the Sídhe have been exacting ruthless revenge through the Call, the summoning of Irish teens to their hellish realm. Although 9 in 10 are simply slaughtered, a lucky few return markedly maimed sometimes physically, always emotionally. Nessa Doherty, a fifth-year student at Boyle Survival College, has spent her formative years dutifully training for the Call. Disabled by a childhood bout of polio, Nessa must work twice as hard to prove herself. Whether she's crafting crutches from broken branches, stifling romantic affections, or memorizing the History of the Sídhe in its entirety, Nessa is ready. That is, until a chilling encounter with school brute Conor Geary leaves her and her peers hunted by human and Sídhe alike. A spry tale of resolve, romance, and retribution saturated with atmospheric lore, lilting prose, and fanciful horrors, O'Guilin's is a world readers won't mind getting trapped in.--Shemroske, Briana Copyright 2016 Booklist
More book reviews at iDreamBooks.com