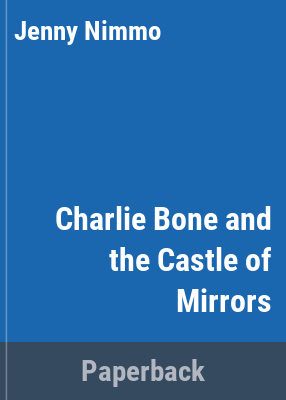 Charlie Bone and the castle of mirrors / Jenny Nimmo.

| Bone, Charlie (Fictitious character) -- Juvenile fictionGenre/Form: Fantasy fiction.DDC classification: Children's Fiction
Tags from this library: No tags from this library for this title. Log in to add tags.
Fiction notes: Click to open in new window

Charlie and his friends are back danger, and the balance of power between the Children of the Red King has never been more dangerous. Billy finally gets his longed-for parents, but he soon wishes he hadn't when the oaths he's forced to sign come flying through the air at him. Charlie is haunted by a ghostly horse, mad with rage over an ancient wrong that happened in the sparkling Castle of Mirrors. The castle was petrified from stone into glass by the sorcerer Yorath in a terrible fire. Charlie's good friend Olivia is haunted too - but no one knows her new secret. Even with the power of Tancred's storms and Lysander's ancestors, Charlie Bone is running short of allies - just when he needs them most.

Gr 4-7-Charlie Bone is off on another action-packed adventure in this recording of Jenny Nimmo's fourth book (Orchard Books, 2005) in the Children of the Red King series. Listeners will need to be familiar with the previous books in the series in order to follow the extended cast of characters and their endowments-magical gifts that are bestowed upon descendents of the Red King-or they will become lost in the quickly moving plot. Charlie begins his second year at Bloor Academy with a bang, receiving detention his very first morning back at school. A literally magnetic new student, a mystical white horse, an ethereal woman with a gift for plants, and young Billy Raven, who can talk to animals, each play a substantial part while Charlie is swept up into a mystery revolving around the Castle of Mirrors during his ongoing search for his missing father. Subtle humor brings a lighter touch into the convoluted and shifting loyalties among the students and instructors at Bloor. Actor Simon Russell Beale reads with aplomb and grace, giving each character, whether man or beast, a distinct voice that makes the many players come to life. A good purchase for both school and public libraries where the series is popular.-Charli Osborne, Oxford Public Library, MI (c) Copyright 2010. Library Journals LLC, a wholly owned subsidiary of Media Source, Inc. No redistribution permitted.

Gr. 4-6. In the fourth book of the projected five in the Red King series, Charlie Bone and his friends (and enemies) begin a new term at Bloor's Academy, where many of the students and staff are endowed with magical abilities. Hoping to find his father and help a friend, Charlie travels to the ominous Castle of Mirrors. Nimmo adds several inventive elements to this magical world, including the transformation of Charlie's wand into a silent creature of mysterious power. Explaining the complex background story and introducing the many characters to new readers slows down the action quite a bit at the start, but the pace picks up nicely when Charlie goes to the rescue of his friend Billy. Prediction: this fantasy should do quite well, assuming a continuing demand for stories about a nice lad with magical powers who goes to boarding school, longs to see his father, has adventures, makes a few mistakes, and gets by with a little help from his friends. --Carolyn Phelan Copyright 2005 Booklist

At Bloor's academy for magically endowed children, a ghostly warhorse helps Charlie and orphan Billy Raven find the half-mythical Castle of Mirrors, but it's no refuge for Billy, who's under the headmaster's thumb. Diverting invention drifts off into vague plot starts and stops, a problem not helped by the author's shallow descriptions and inability to shape a scene. (c) Copyright 2010. The Horn Book, Inc., a wholly owned subsidiary of Media Source, Inc. No redistribution permitted. All rights reserved.
More book reviews at iDreamBooks.com