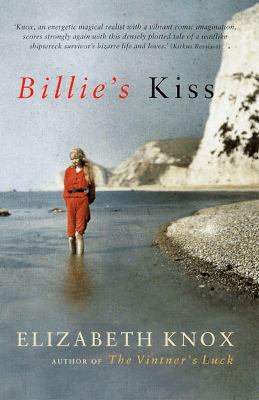 Genre/Form: New Zealand fiction -- 21st century. | Romance fiction. | Detective and mystery fiction.DDC classification: NZ823.2 Awards: Montana New Zealand Book Awards 2002 Fiction Runner-Up.Summary: One of the few survivors after a ship explodes while docking on the island of Kissack/Skilling, Billie Paxton is looked on with suspicion from the island inhabitants as she was seen to jump from the ship just before it exploded. However, the islanders have other worries of their own.
Tags from this library: No tags from this library for this title. Log in to add tags.
Fiction notes: Click to open in new window

Historical novel set in the remote, divided Scottish island of Kissack and Skilling, one half of which looks historically and geographically towards Catholic Ireland, the other towards the Protestant north and Scandinavia. The novel combines an Edwardian mystery with a love story. Elizabeth Knox won the Deutz Medal for Fiction in the 1999 Montana New Zealand Book awards for The Vintner's Luck.

One of the few survivors after a ship explodes while docking on the island of Kissack/Skilling, Billie Paxton is looked on with suspicion from the island inhabitants as she was seen to jump from the ship just before it exploded. However, the islanders have other worries of their own.

New Zealander Knox (The Vintner's Luck; Black Oxen) cleverly explores the many meanings of the word "kiss" in this haunting romantic mystery set in 1903. Billie Paxton, an uneducated but perspicacious young woman, thinks the worst is over after a rough voyage on the Gustav Edda, a Swedish steamer that has taken her to the outer Scottish island of Kissack and Skilling, along with her pregnant sister, Edith, and her brother-in-law, Henry Maslen, a tutor who has accepted a position with the local squire, Lord Hallowhulme, at Kiss Castle. But just as the Gustav Edda is docking in port, an explosion shatters the hull, leaving Edith dead and Henry injured. An excellent swimmer, Billie immediately jumps off the stricken ship and scrambles to shore, witnessed by Lord Hallowhulme's cousin, Murdo Hesketh. One of the few other passengers to survive the catastrophe, Murdo wonders how Billie came to be so ready to leap off the doomed boat. On Kissack and Skilling, the intricately interwoven lives of a host of islanders, particularly the inhabitants of Kiss Castle, give Billie plenty to ponder. Meanwhile, Murdo pursues Billie as both suspect and object of desire. When Murdo claims it was "just a kiss" after finally succeeding in kissing the breathless Billie, it turns out to be much more than that. The novel's promotion invokes the names of Emily Bront and Jane Austen; aficionados of those classic authors shouldn't get their hopes too high, but many romance fiction fans should be well satisfied. (Mar. 1) (c) Copyright PWxyz, LLC. All rights reserved

Set in Scotland in 1903, Knox's novel begins with an explosion--literally. Billie Paxton is traveling with her pregnant sister, Edith, and Edith's husband, Henry, to Stolnsay, where Henry is to be employed by Lord Hallowhulme as a secretary. After Billie shares an impulsive kiss with Henry on the deck of the ship on which they are traveling, she leaps into the sea. Immediately after she jumps, a bomb goes off, and the ship sinks, killing many of the passengers, including Edith. Lord Hallowhulme takes both Billie and Henry in. Lord Hallowhulme's cousin, the handsome, standoffish Murdo Hesketh, was also aboard the ship and is determined to discover the cause of the explosion. At first, he suspects Billie, leading to animosity between the two but also the rise of an undeniable attraction. Murdo doggedly pursues the mystery of the bomb until he comes to a conclusion that surprises even him. Knox's third novel is both ambitious and accomplished, vividly evoking turn-of-the-century Scotland. Her characters are unique and yet somehow familiar, in the sense that they are reminiscent of famous characters in Victorian literature. Filled with rich language and buoyed by a compelling story, this novel should have a wide appeal. --Kristine Huntley

New Zealander Knox, an energetic magical-realist with a vibrant comic imagination, scores strongly again with this densely plotted tale of a waiflike shipwreck survivor's bizarre life and loves. In 1903, the Gustav Edda, en route to the twin Scottish islands of Kissack and Skilling, unaccountably "explodes" upon reaching port, killing most of its crew and passengers. An exception is 20-year-old Wilhelmina "Billie" Paxton, who had jumped into the water seconds before the catastrophe. The reader knows why, but fellow survivor Murdo Hesketh does not-and he soon undertakes to discover why Billie had committed "sabotage." The progress of this central plot strand is interrupted, and complicated, by the parallel "investigation" performed by a butler named (Geordie) Betler, who travels to the islands' primary settlement, Stolsnay, to learn about the disaster that had claimed the life of his younger brother. As Knox subtly reveals the connections among Billie's inchoate maturity (she's mildly retarded: a kind of Dostoevskyan "innocent"), savant-like musical gift, and constantly changing relationship with the driven Murdo, she also layers in increasingly crucial information about the ambitious plans contrived by Murdo's wealthy cousin Lord Hallowhulme (the de facto "lord" of this kingdom), a murder buried in Stolsnay's past, Sir Francis Galton's theory of eugenics and the minutiae of "pisciculture," and the plays of George Bernard Shaw and Shakespeare. This arguably overcrowded melodrama (which echoes the replete symbolic novels of both Patrick White and John Cowper Powys) alternately frustrates and fascinates, but Knox somehow pulls most of its unruly parts together, rewarding the bedazzled reader with a stunning climactic confrontation between Murdo and the Prospero-like Lord Hallowhulme, and a deus ex machina topper that the late Richard Condon might have concocted. Knox's wild and wooly fictions (Black Oxen, 2001, etc.) aren't for everybody, but if minimalism doesn't satisfy your appetite for narrative, she may just be the writer for you.
More book reviews at iDreamBooks.com