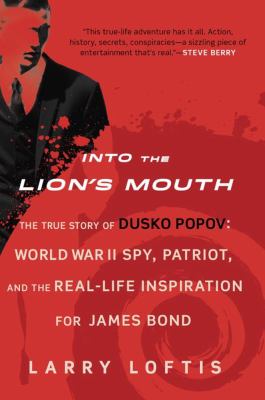 DDC classification: 940.54/8641092
Contents:
Forging the anvil -- Exiting feet first -- Spying for Hitler, killing for Churchill -- Magic -- The bee hive -- Too many devices -- Passion and addiction -- Death in the afternoon -- "He's not dead" -- Taranto and the target -- Casino Estoril -- Pearl Harbor warning -- Cover-up -- I'll kill her -- Butterflies and carnage -- Blown -- Incomplete canvas -- The art of the silent kill -- "Turn around slowly" -- Ticking -- Five lives -- Shots rang out -- Truth serum -- AUF -- D-Day -- Naked and shaved -- Ulla -- Partisan politics -- Johnny.
Summary: A biography of Dusko Popov, who, as "an operative for the Abwehr, SD, MI5, MI6, and FBI during World War II ... seduced countless women--including agents on both sides--spoke five languages, and was a crack shot, all while maintaining his cover as a Yugoslav diplomat"--Amazon.com.
Tags from this library: No tags from this library for this title. Log in to add tags.
Total holds: 0

James Bond has nothing on Dusko Popov. A triple agent for the Abwehr, MI5 and MI6 and the FBI during World War II, Popov seduced numerous women, spoke five languages and was a crack shot, all while maintaining his cover as a Yugoslavian diplomat. Into The Lion's Mouth is a globe-trotting account of Popov's entanglement with espionage, murder, assassins and lovers - including enemy spies and a Hollywood starlet. It is a story of subterfuge and seduction, patriotism and cold-blooded courage.

A biography of Dusko Popov, who, as "an operative for the Abwehr, SD, MI5, MI6, and FBI during World War II ... seduced countless women--including agents on both sides--spoke five languages, and was a crack shot, all while maintaining his cover as a Yugoslav diplomat"--Amazon.com.

Dusko Popov (1912-81) was an unlikely candidate to become one of the most successful spies of World War II. The son of a wealthy industrialist, Popov earned law degrees from the universities of Belgrade and Freiburg. Popov lived like a playboy: he gambled, lived well, and spent extravagantly on his numerous girlfriends. By 1940, he entered into German employ as a spy. Before beginning work for the Germans, Popov took this information to the British, and unofficially began working for them. Soon he was a double agent, in the employ of both the British and Germans. Author Loftis recounts the exploits of the model for Ian Fleming's James Bond character with great skill. He captures the stress, danger, and uncertainty Popov faced while trying to misdirect the Germans without making them suspicious and passing important information on to the British. A "Dramatis Personae" list at the start of the book helps readers keep the major players straight. VERDICT Loftis's account will have readers on the edge of their seats and immersed in this sometimes unbelievable tale. Recommended for World War II enthusiasts and those interested in real-life spy stories.-Chad E. Statler, Lakeland Comm. Coll., Kirtland, OH © Copyright 2016. Library Journals LLC, a wholly owned subsidiary of Media Source, Inc. No redistribution permitted.
More book reviews at iDreamBooks.com