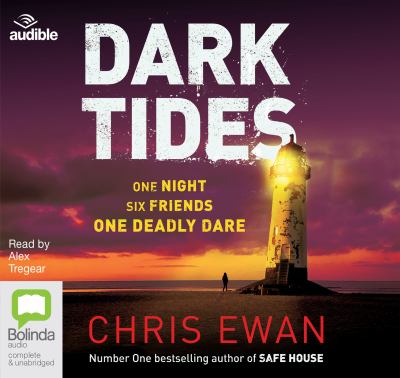 | Isle of Man -- FictionGenre/Form: Thrillers (Fiction) | Audiobooks.DDC classification: 823.92 Read by Alex Tregear.Summary: When Claire Cooper was eight, her mother disappeared during Hop-tu-naa, the Manx Halloween. When Claire was 18, she and her friends took part in a Hop-tu-naa dare that went terribly wrong. Now that she is in her early 20s and a police officer, what happened that Hop-tu-naa night has come back to haunt them all, and Claire must confront her deepest fears in order to stop a killer from striking again.
Tags from this library: No tags from this library for this title. Log in to add tags.

From the #1 best-selling author of Safe House comes a story about friendship, family, secrets, lies, and the things we do for love. When Claire Cooper was eight, her mother disappeared during Hop-tu-naa, the Manx Halloween. When Claire was 18, she and her friends took part in a Hop-tu-naa dare that went terribly wrong. Now that she is in her early 20s and a police officer, what happened that Hop-tu-naa night has come back to haunt them all, and Claire must confront her deepest fears in order to stop a killer from striking again. For fans of Stephen King and Harlan Coben, this is I Know What You Did Last Summer meets The Wicker Man from one of the country's new generation of thriller writers.

When Claire Cooper was eight, her mother disappeared during Hop-tu-naa, the Manx Halloween. When Claire was 18, she and her friends took part in a Hop-tu-naa dare that went terribly wrong. Now that she is in her early 20s and a police officer, what happened that Hop-tu-naa night has come back to haunt them all, and Claire must confront her deepest fears in order to stop a killer from striking again.

Years ago, Claire's mother disappeared on the night of Hop-tu-naa, the Isle of Man's version of Halloween, and was presumed dead. Now an emotionally scarred teenager with a circle of five friends, Claire believes that she knows who killed her mother and plans a daring Halloween prank that involves breaking into the man's house. The night ends in tragedy, and one member of the group is jailed for his role in the incident. Guilt and pain over their actions tear the group apart, but they begin to rebuild their lives and move forward. However, the episode casts a shadow over all of them, and it comes back to haunt them as one member of the group, then another, is killed on Hop-tu-naa. Ewan's latest thriller (after Safe House) is an engrossing story of revenge, remorse, and one young woman's ongoing search for the truth. Verdict Fans of thrillers and suspense will enjoy this latest tale from a fairly new British author, although the ending is, unfortunately, too predictable.-Linda Oliver, MLIS, Colorado Springs © Copyright 2015. Library Journals LLC, a wholly owned subsidiary of Media Source, Inc. No redistribution permitted.

On the Isle of Man in 2005, friends of 18-year-old Claire Cooper, the narrator of this derivative thriller from Ewan (Safe House), rope her into a reckless act on Hop-tu-naa, as Halloween is known on the island. Claire's friends want to terrify Edward Caine, a creepy older man, who once employed Claire's mother as his personal assistant. They plan to break into his mansion and leave an outward pointing footprint in the ash in front of Caine's fireplace, a sign that someone in his family will soon die. The scheme goes awry, ending in unexpected violence. The consequences of the bloodshed continue through the years until 2014, as the conspirators are picked off one by one. Claire, now a detective constable, insinuates herself into the investigations, crossing many lines in an effort to remain alive and uncover the truth. The plot structure is reminiscent of a score of slasher movies, and Ewan doesn't do enough that's new to dispel associations with those familiar tropes. Agent: Vivien Green, Sheil Land Associates (U.K.). (Dec.) © Copyright PWxyz, LLC. All rights reserved.

On the Isle of Man, the Manx celebrate their version of Halloween every October 31, a dark tradition called Hop-tu-naa. Claire Cooper is eight years old when her mother takes her out in her handmade costume for the holiday. Their final stop is at the home of her mother's employer, a creepy old man who frightens Claire. The next morning, her mother disappears, with ramifications that affect the rest of Claire's life. As a teenager, Claire is lonely and a bit odd. An acquaintance invites her to join her group of friends, and it turns out that they perform a game of dares every Hop-tu-naa, eventually with devastating results. Fast-forward, and Claire has become a cop, investigating a deadly car accident on Hop-tu-naa. The victim was one of her teen friends, and when another of the group dies, Claire realizes it's more than a coincidence. There are dark and stormy nights, children playing in a dark wood, and more of the usual horror tropes here, all helping to create a sinister atmosphere. In a chilling page-turner that spans 20 years, Ewan explores the darker side of Manx folklore.--Alesi, Stacy Copyright 2015 Booklist

A rookie policewoman probes frightening events from her youth that have haunted her ever since. Claire Cooper harbors many disturbing questions about the disappearance of her mother, which occurred when she was a child, and the aftermath of a violent prank she participated in as a teenager. These unsettling events lead to her decision, recounted in taut first-person narration, to become a police officer. Moving fluidly forward and back in time, she shows her teenage self falling in with a slacker crowd. In 2003 on Halloween night, which they call "Hop-tu-naa," she urges her friends to take revenge on the man she blames for her mother's death. His name is Edward Caine, and Mum worked as his personal assistant in his mansion on the Isle of Man, where Claire often accompanied her and played with Caine's rowdy son, Morgan. On a Hop-tu-naa several years earlier, Caine had asked Mum to work late, and she planned to return after taking young Claire home. Claire never saw her again, and Caine of course claimed that she never made it back. Teenage Claire and friends break into the Caine mansion and vandalize it, but the gesture gives her no comfort. Ominous italicized snippets from the killer's perspective pepper the second half of the tale as adult Claire questions her dad, Morgan, and Edward Caine, and all her accomplices in the break-in on the way to uncovering the truth about Mum. Solid, brooding suspense with a whodunit chaser from Ewan (Dead Line, 2014, etc.), author of the more upbeat Good Thief series. Copyright Kirkus Reviews, used with permission.
More book reviews at iDreamBooks.com