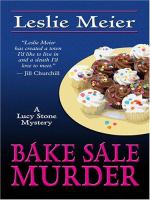 Life hasn't been the same for Lucy Stone since local developer Fred Stanton and his constantly complaining wife, Mimi, built five homes next door to her farmhouse. When Mimi doesn't show up for her shift at The Hat and Mitten Fund bake sale, Lucy makes a shocking discovery: Mimi, face down on her kitchen floor--dead. While the police investigate, Lucy gets busy following her own leads, though some people clearly don't appreciate her snooping. But when a rock with a threatening note attached comes crashing through her window, Lucy's more determined than ever to uncover the truth...even if it means breaking a few eggs along the way.

In Meier's disjointed 13th Lucy Stone mystery (after 2005's New Year's Eve Murder), the Tinker's Cove, Maine, newspaper reporter has a whole subdivision of peculiar neighbors around her once peaceful farmhouse, and anonymous letters are arriving at her office. The unknown penman alleges that the new football coach, Buck Burkhart, is condoning unsavory behavior by the high school's senior football players toward the junior players and the cheerleaders, one of whom is Lucy's daughter, Sara. But no one is talking or listening, as the coach launches his lackluster team into a victorious season. Then Lucy finds Burkhart's neighbor, one of her volunteer bakers, knifed to death in her kitchen. And what about the homeless man? The philandering veterinarian? The victim's bad-tempered husband? The author makes only a halfhearted effort to connect all the dots, while the one big break in the murders comes, unpleasantly and literally, through Lucy's dog, Libby. (Dec.) (c) Copyright PWxyz, LLC. All rights reserved

Life in a small Maine coastal town is disrupted by the advent of People Not Like Us. Longtime Tinker's Cove resident Lucy Stone (Birthday Party Murder, 2002, etc.) "wouldn't mind these new folks if they'd know their place." But the residents of Fred Stanton's spanking-new development at the end of Red Top Road simply don't. Preston Stanton, 18, buzzes the neighbors with his motorcycle. His mother, Mimi, suggests that Lucy's prize lilacs are obstructing her view of traffic. Divorced mother Frankie LaChance lets her daughter sunbathe on the porch. Ex-businesswoman Chris Cashman has the nerve to suggest that Sue Finch's Better-Than-Sex brownies have too much fat to include in the Hat and Mittens Fund's upcoming bake sale. Still, when Lucy discovers Mimi in her kitchen with a knife in her back and a batch of Yummy Pumpkin Kisses burning in the oven, she feels it's her civic duty to investigate, and to look into the allegations of hazing by members of the local high-school football team--allegations hotly denied by Coach Buck Burkhart, another newcomer who's become a local hero since the Warriors started winning, and pooh-poohed by School Superintendent Bob Sabin. A second death and some tearful outbursts by her cheerleader daughter Sara confirm Lucy's conviction that there's trouble in paradise. Although a little crisper than earlier entries, Meier's latest entry still lets small-town banter crowd its mystery into the back pages. Copyright ©Kirkus Reviews, used with permission.