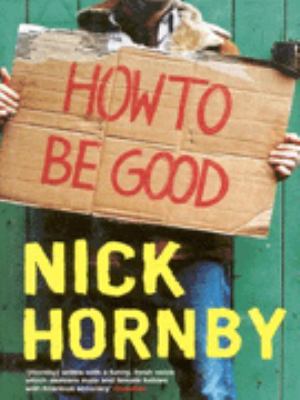 How to be good / by Nick Hornby.

According to her own complex moral calculations, Katie Carr has earned her affair. She's a doctor, after all, and doctors are decent people, and on top of that, her husband David is the self-styled angriest man in Holloway. But when David suddenly becomes good Katie's sums no longer add up, and she asks herself some very hard questions.

Frances Barber is perfect as the voice of Katie Carr, a North London doctor and mother of two in the midst of a midlife crisis. As the novel begins, Katie's marriage to her bitter and sarcastic husband, David, the author of the syndicated "Angriest Man in Holloway" column, has deteriorated to the point where she has taken a lover and asked for a divorce. Everything changes, however, after faith-healer DJ GoodNews lays his hands on David, and the "Angriest Man in Holloway" is transformed into a "sincere Do-Gooder." David invites DJ to move in, and the two embark on an ambitious campaign to change the world. Although Katie is proud of some of David's accomplishments, she struggles with the change in dynamics in their relationship as well as with some of David's more extreme acts of charity. Entertaining and substantial, Hornby's novel is recommended for all popular fiction collections. Beth Farrell, Portage Cty. Dist. Lib., OH (c) Copyright 2010. Library Journals LLC, a wholly owned subsidiary of Media Source, Inc. No redistribution permitted.

H"Good" characters in novels are notoriously hard to create, not because goodness is uninteresting, but because when it's uncontaminated by self-interest it isn't plausible, especially in a comedy. In Hornby's (High Fidelity; About a Boy) hilarious novel, the problem of goodness is dumped on Dr. Katie Carr. After more than 20 years of marriage and two children, Katie has had it: she's having an affair, feels intellectually dull and wishes her husband, David, would turn into a different person. Unfortunately for her, she gets her wish when David, a bitter, semi-employed intellectual who writes a column for a local newspaper subtitled "The Angriest Man in Holloway," becomes a secular saint. To spite her after an argument in which she suggests that they divorce, he goes to a dreadlocked faith-healer named DJ GoodNews. When GoodNews lays his hands on David, he suddenly becomes loving, concerned and utterly humorless. He gives money away, stops writing his column, organizes housing for the homeless (inconveniently enough, with neighbors whose houses have empty rooms) and invites GoodNews to move in. David donates the children's surplus toys to charity and asks them to adopt the uncool kids at school as their friends; their son, Tom, hates this, but his sister, Molly, develops an alarmingly patronizing friendship with a smelly little girl named Hope. Just how will Katie handle being surrounded by all of this horrible goodness? Hornby relies less than usual upon pop references which would be inappropriate for Katie's character anyway, although Homer Simpson is invoked a few times but he has created, without them, a very funny agon of liberalism. (July 9) Forecast: Despite, or perhaps because of, the declining popularity of the self-conscious hipness that made High Fidelity such a hit, Hornby's latest should enjoy even wider U.S. sales, bolstered by a national print ad campaign and author tour. (c) Copyright PWxyz, LLC. All rights reserved

In a departure from Hornby's trio of recent best-sellers, which positioned him as a wise and funny spokesperson for the Modern Male, this new novel features a woman protagonist, and it is every bit as charming and effective. Katie Carr, mother of two, is a doctor in a small London practice; she thinks of herself as a good person--good, despite the affair she's been having, which is justified because her husband, David, is such a sourpuss. David is, in fact, professionally cynical. He writes a newspaper column called "The Angriest Man in Holloway," in which he shoots arrows at any popular subject he can think of. Into their fractured family comes GoodNews, a charismatic, multipierced Generation X-er who displays miraculous healing powers. Under GoodNews's tutelage, David reforms his ways to the extreme; he starts giving away material possessions, attempts to make reparations for decades-old wrongs, invites a homeless teenager to live in the spare bedroom--all to Katie's increasing alarm. What does it mean to be truly good, anyway? Breezy without being shallow, truth seeking (and, egad, spiritual) without being sentimental, Hornby's novel explores the theme of goodness with tremendous fun. The novel's final message seems to be the potentially deadly "There's no place like home," but Hornby succeeds, in large part because he's got the heart, the brain, and the courage to prove it quite convincingly. --James Klise

Another delightful comedy from Hornby (High Fidelity, 1995, etc.), this one about a woman whose plans to divorce her crabby husband are sidetracked by his sudden, if loony, embrace of saintliness. Though the 72-hour metamorphosis is a bit of a stretch, no matter: this hilarious romp entirely justifies the wise reader's agreement to play along. Narrator Katie Carr, a 40-something doctor in England's National Health Service, finds herself disenchanted with her marriage and in the midst of an affair. Husband David, a newspaper columnist known as "the Angriest Man in Holloway," is insufferably cynical and absorbed by his public spleen-spitting. Katie feels forgotten. She confides the affair and suggests a divorce; David instructs her to tell their two children during his three-day absence; she dithers, and when David returns he apologizes for not loving her properly. It seems he has begun receiving "treatments" from DJ GoodNews, whose impeccably beneficent persona persuades David to embrace the love in the world and nourish it as he can. The divorce is called off, and DJ and David begin tackling the problem of homeless children in Holloway by persuading neighbors to take individual kids for a year or so. Soon, a homeless boy named Monkey is eating at the Carr table, and David is giving away his children's prized toys. Thus begins a series of several remarkable schemes rendered with an entertaining mix of humor and delicately suggestive questioning. Hasn't Katie, a doctor who helps the afflicted, always been the good one after all? Just what does it mean to be "good"? Hornby's quick eye and nimble observational style nail everyone's vanity, but they all come in for their moment of insight as well. By the close, the engaging Carr family is restored whole, even as it realizes-and as the author reminds us with his characteristic sprightly fatalism-that they still inhabit an empty universe. Author tour
More book reviews at iDreamBooks.com