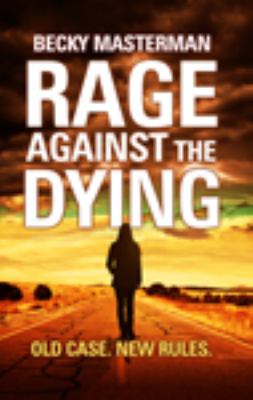 | United States -- Officials and employees -- Crimes against -- Fiction | Tucson (Ariz.) -- FictionGenre/Form: Detective and mystery fiction | Large type books.Online resources: Click here to access online Summary: After a long and murky career with the FBI, Brigid Quinn is trying to move on. She's got a nice house. Dogs. A husband who knows nothing of her past. But the abduction and murder of a young female colleague still haunts her. So when the girl's body is finally found, and a man confesses to the murder, Brigid is desperate for answers. Yet the more she learns, the more convinced she is that they have the wrong man. Following leads that the Bureau ignored, she's propelled straight into the path of a ruthless serial killer. One who has evaded the law for decades, and will stop at nothing to keep her quiet. But Brigid Quinn is a woman to be reckoned with...
Tags from this library: No tags from this library for this title. Log in to add tags.
Fiction notes: Click to open in new window

After a long and murky career with the FBI, Brigid Quinn is trying to move on. She's got a nice house. Dogs. A husband who knows nothing of her past. But the abduction and murder of a young female colleague still haunts her. So when the girl's body is finally found, and a man confesses to the murder, Brigid is desperate for answers. Yet the more she learns, the more convinced she is that they have the wrong man. Following leads that the Bureau ignored, she's propelled straight into the path of a ruthless serial killer. One who has evaded the law for decades, and will stop at nothing to keep her quiet. But Brigid Quinn is a woman to be reckoned with...

Yes, this debut thriller has a fast-paced, action-filled plot littered with serial killers and their victims. Yes, its portrayal of FBI procedures resonates with authenticity, and the romantic subplot is engaging. But, most of all, it is the savvy heroine/narrator, Brigid Quinn, who will capture the reader's attention. Brigid is a 59-year-old retired FBI agent with a bad back, a history of alcohol abuse, and a questionable officer-involved shooting in her past. Yet she's made a new life for herself in the outskirts of Tucson by marrying widowed philosophy professor and former priest Carlo DiForenza. She's taken up cooking and gardening and has come to love twilight strolls with her new husband and their two rambunctious pugs. However, when the loose ends of an old unsolved case begin to intrude on her idyllic life, Brigid quickly finds herself caught up in the intrigue despite her desperate desire to shield Carlo from the reality of her past. Verdict Masterman lives up to her name in this masterly combination of compelling character and plot to keep the pages turning. And readers of a certain age will love her middle-aged protagonist. [Library marketing; Minotaur 1st Edition Selection.]-Nancy McNicol, Hamden P.L., CT (c) Copyright 2013. Library Journals LLC, a wholly owned subsidiary of Media Source, Inc. No redistribution permitted.

Resist any temptation to bail after the creepy prologue-a sexual predator's-eye-view of the woman he's about to attack-because then you'll miss one of the most memorable FBI agents since Clarice Starling as well as a killer debut thriller. At 59, Brigid Quinn has officially closed the book on a legendary-and controversial-Bureau career, including years undercover, and is struggling to forget the horrors that still haunt her as a newlywed in a suburb north of Tucson, Ariz. Then the authorities arrest trucker Floyd Lynch, who claims to be the Route 66 Killer-the one notorious homicide case she didn't close, and which seven years earlier claimed the life of her protegee, rookie undercover agent Jessica Robertson. But some things just don't add up to either young FBI agent Laura Coleman or Quinn. The steely veteran finds herself thrust back into a nightmare that threatens to shatter her new life-if it doesn't get her killed. First-time novelist Masterman, acquisitions editor for a press specializing in forensic medical textbooks, ratchets up the suspense with a secondary plot it would be criminal to reveal, stumbling only when it comes to Quinn's less than convincing domestic bliss with a widowed former priest turned college professor and his pair of pugs. Agent: Helen Heller, the Helen Heller Agency. (Mar.) (c) Copyright PWxyz, LLC. All rights reserved.

Brigid Quinn is a retired FBI agent who was forced out over shooting an unarmed man. She spent her career undercover, working on sexual predator cases, and trained her protege, Jessica, to follow in her footsteps. Jessica went missing while working on a serial-killer case, and Brigid never recovered from the loss. Several years later, she is happily married and living an idyllic life in Tucson when she learns that there has been an arrest in the case, but the new agent working it, Laura Coleman, thinks the confession is false. When Coleman disappears and the bureau doesn't seem to notice, Brigid finds herself in the thick of things once again, only this time she is worried about losing another agent, her husband, and her newfound happiness. Brigid is a marvelous character, and her skills are fearsome for someone her age. Although Brigid sometimes takes things too far, stretching the bounds of credulity, it is worth the suspension of disbelief to hang with her. Fans of Lisa Gardner and Tess Gerritsen will love this book.--Alesi, Stacy Copyright 2010 Booklist

Masterman's gangbusters debut sets a retired FBI agent who thinks she's seen it all against a serial killer who provides new horrors she's never seen. Before shooting an unarmed suspect back in Georgia sent her into early retirement in Tucson, Brigid Quinn had earned a reputation as a brave sex-crimes undercover agent and a skilled investigator. Now that she's living the good life with her bridegroom, Carlos DiForenza, a priest turned professor, she thinks that's all behind her, from the adrenaline rushes to the scandal. But she couldn't be more wrong. When long-haul trucker Floyd Lynch confesses to being the Route 66 killer who killed eight women over a dozen years--the eighth of them being Jessica Robertson, who'd been working as bait under Brigid's supervision--Laura Coleman, a Tucson FBI agent who's always admired Brigid, shares her suspicion that Lynch's confession is bogus and asks Brigid to work the case with her. There are only three complications: Brigid isn't entitled to work any cases anymore; Coleman disappears shortly after getting eased off the case herself; and Brigid shortly has her hands full covering up her own killing of murderous rapist Gerald Peasil. Readers who can accept the coincidence of two sex killers sharing the same zip code and Brigid's unconvincing explanation of why she doesn't just report Peasil's death, which would manifestly be covered by a self-defense plea, are in for a ride as thrilling as they can find outside the pages of Jeffery Deaver (who's regularly invoked here), in the company of a heroine whose cleareyed disillusionment gives each wisecrack a trembling sense of mortality. A scorching, humane first novel that reads as if Masterman's been sitting for a long time on some truly ugly secrets.]] Copyright Kirkus Reviews, used with permission.
More book reviews at iDreamBooks.com