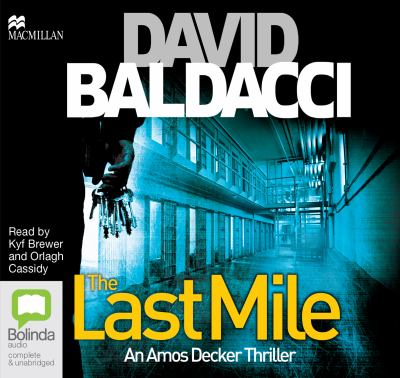 Genre/Form: Detective and mystery fiction. | Thrillers (Fiction). | Audiobooks.DDC classification: 813.6 Read by Kyf Brewer and Orlagh Cassidy.Summary: Melvin Mars awaits his fate on Death Row. He was one of America's most promising football stars until, aged twenty-years-old, he was arrested and convicted for the murder of his parents just as he was due to begin a very lucrative contract with the NFL. When Amos Decker, newly appointed special agent with the FBI, hears the news that Melvin was saved in the final seconds before his execution because someone has confessed to the killings, he persuades his boss to allow him to carry out an investigation into the Mars murders.
Tags from this library: No tags from this library for this title. Log in to add tags.
Fiction notes: Click to open in new window

Following Memory Man, #1 NYT bestselling author David Baldacci returns with his next thriller featuring detective Amos Decker. Convicted murderer Melvin Mars is counting down the last hours before his execution for the violent killing of his parents 20 years earlier, when he's granted an unexpected reprieve. Another man has confessed to the crime. Amos Decker, newly hired on an FBI special task force, takes an interest in Mars' case after discovering the striking similarities to his own life: both men were talented football players with promising careers cut short by tragedy. Both men's families were brutally murdered. And in both cases, another suspect came forward, years after the killing, to confess to the crime - a suspect who may or may not have been telling the truth. The confession has the potential to make Melvin Mars - guilty or not - a free man. Who wants Mars out of prison? And why now?

Melvin Mars awaits his fate on Death Row. He was one of America's most promising football stars until, aged twenty-years-old, he was arrested and convicted for the murder of his parents just as he was due to begin a very lucrative contract with the NFL. When Amos Decker, newly appointed special agent with the FBI, hears the news that Melvin was saved in the final seconds before his execution because someone has confessed to the killings, he persuades his boss to allow him to carry out an investigation into the Mars murders.

Amos Decker, last seen in Memory Man, is part of an FBI special task force charged with investigating cold cases. Here he takes an interest in Melvin Mars, a man who has spent 20 years in jail and is about to be executed for brutally murdering his parents when someone else confesses to the crime. Decker, who has a photographic memory and can never forget anything, identifies the improbable murderer but not until after a member of the task force disappears. Kyf Brewer's nuanced narration brings out Decker's and Mars's different personalities and feelings about the case, and Orlagh Cassidy does an excellent job voicing the female characters and deploying various regional accents. Verdict Recommended for audio thriller collections. ["Just when the story line heads to what seems an obvious conclusion, Baldacci veers off course with a surprising twist. The end result is another exciting read from a thriller master": Xpress Reviews 3/25/16 starred review of the Grand Central hc.]-Ilka Gordon, Beachwood, OH © Copyright 2016. Library Journals LLC, a wholly owned subsidiary of Media Source, Inc. No redistribution permitted.

In bestseller Baldacci's so-so sequel to 2015's Memory Man, the FBI persuades Amos Decker-a former professional football player, whose career-ending injury left him with some unusual abilities, including an almost perfect memory-to join a new unit that combines special agents and "civilians with special skills" to reopen select cold cases. Decker advocates for a case that appears resolved. Former college football standout Melvin Mars is reprieved minutes from his execution after another convict on death row, Charles Montgomery, confesses to murdering Mars's parents in their Texas home more than 20 years earlier. Decker feels an affinity for Mars, since the two played against each other once, and Decker also lost family members to a killer. His strong feelings prevail, and his unit looks into whether Montgomery is being truthful and why he waited so long to come forward. Despite his extra brain power, Decker doesn't leave much of an impression. This entry will work best for readers with a taste for improbable resolutions. Agent: Aaron Priest, Aaron M. Priest Literary Agency. (Apr.) © Copyright PWxyz, LLC. All rights reserved.

Amos Decker, the former pro football player, then cop, then private eye introduced in Memory Man (2015), is now working for the FBI, using his special gift he has hyperthymesia, giving him essentially a perfect memory to bring criminals to justice. Amos is especially curious about Melvin Mars, convicted of the murders of his own parents two decades ago and who now might be set free because someone else has suddenly confessed to the killings. But is the confession legit? Is Mars a wrongly convicted man, or a murderer whom someone, for some reason, wants back on the streets? The story might be a bit more convoluted than it needs to be, but the characters are solid, and Decker moves from an interesting one-off protagonist to an engaging and multilayered series lead.--Pitt, David Copyright 2016 Booklist

Amos Decker, Baldacci's hulking former NFL player and one-time police investigator, is back for a case involving death row inmates, a brutal double murder, and a shattered sports career. When readers first met Amos Decker, he was a socially inept giant mired in the past; his wife, daughter, and brother-in-law were brutally murdered in Decker's own home. Living out of a tiny motel room and working as a private investigator, Decker finally solved their murders and helped the FBI put a relentless killer to bed. Now, Decker has reported for duty at a special FBI unit to work cold cases. Commanded by Special Agent Ross Bogart, the unit includes journalist Alexandra Jamison, clinical psychologist Lisa Davenport, and the sullen Todd Milligan, an FBI field agent. The team reports for their first day of duty and almost immediately travels from Quantico to Texas to work the case of a former NFL shoo-in, Melvin Mars, whoon the brink of the pro football draftwas arrested, charged, and convicted of killing his parents. But on the eve of Mars' execution, another man in another state, also on death row, confesses to killing the pair. Upon their arrival in Texas, the team from Quantico finds the case against Mars makes less and less sense. When readers first met Decker, he was maladjusted and brilliant, his NFL career cut short by a vicious hit that altered his life and left him with perfect recall. And it was his incredible memory that solved his cases. This new, improved, vanilla Decker is less interesting than the damaged hero Baldacci first introduced. And while the case starts out with plenty of potential, Decker's incredible memory really isn't flexed much here, so it's ultimately solved by ordinary detective work. Riddled with implausible situations and light on the research, this plodding tale is for die-hard Baldacci fans only. Copyright Kirkus Reviews, used with permission.
More book reviews at iDreamBooks.com