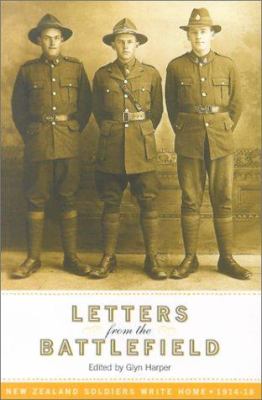 A collection of sixty one letters written by and representing the lives of soldiers during the Great War. The book is divided into five sections, covering Gallipoli, the French campaigns of 1916, 1917 and 1918, and the Egypt-Palestine battles. Glyn has written a scene-setting introduction to the book, and provides a brief outline of the military situation relevant to each section. The main feature of the book is the letters written home to parents, siblings, lovers, wives and children. These letters describe what it's like to be at war, including the nervous anticipation, the noise, the dirt, the lice, the stench of dead and rotting bodies decaying in the sun and the relative sanctuary of a hospital. Many of the letter-writers never returned to New Zealand;in some cases, a letter from their commanding officer or a friend is included, which describes the dead man's heroic end, or final resting place.