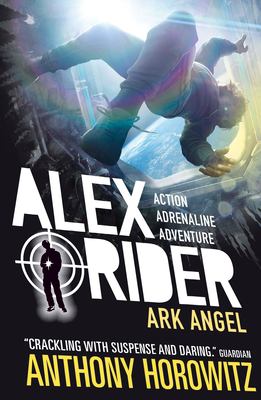 DDC classification: Young Adult
Contents:
Originally published: 2005.
Summary: Alex Rider is in hospital and determined to put his spying days behind him, but the reluctant teenage superspy is forced into action once again when a group of deadly eco-terrorists breaks in. Suggested level: secondary.
Fiction notes: Click to open in new window
Total holds: 0

Alex Rider is in hospital and determined to put his spying days behind him, but the reluctant teenage superspy is forced into action once again when a group of deadly eco-terrorists breaks in. Suggested level: secondary.

For fans of the Alex Rider series, Anthony Horowitz offers a nifty paper-over-board handbook, Alex Rider: The Gadgets, an overview of "all devices used by [the hero] on his first five missions." An opening memo from Alan Blunt expresses concern that these inventions from Scorpia could fall into the wrong hands, and with good reason-each gadget gets (at least) a spread with gatefold, showing precisely how each works, from the Cutter CD Player used to penetrate Point Blanc Academy to the Geiger Counter Games Console that the CIA gave to Alex for his trip to Cuba. This will serve as the perfect segue to Alex Rider's sixth assignment, Ark Angel, in which eco-terrorists target this titular hotel, the first luxury lodgings in outer space, as an environmental threat. (c) Copyright PWxyz, LLC. All rights reserved

Gr 5-10-Alex Rider is giving it up. Being a teenage secret agent is just too dangerous. He wants his old life back. As he lies in the hospital bed recovering from a gunshot wound, he contemplates the end of his career with MI6, the British secret service. But then he saves the life of Paul Drevin, son of multibillionaire Nikolei Drevin, and once again he is pulled into service. This time his mission involves eco-terrorists, rockets to space, maniacal killers, and a less-than-idyllic tropical island. Is it all in a day's work, or will this truly be Alex Rider's last mission? The action-filled plot develops quickly and keeps readers on the edge of their seats. The over-the-top characters, with their exaggerated quirks and personalities, work well in this James Bond-like novel. Detailed background, technical, and political information, essential for any spy story, is uncomplicated and easy for most readers to understand. Though there are some references to previous missions, this title can certainly stand alone. Recommend it to your reluctant readers and get ready for them to line up for the rest of the series.-Heather E. Miller, Homewood Public Library, AL (c) Copyright 2010. Library Journals LLC, a wholly owned subsidiary of Media Source, Inc. No redistribution permitted.

Gr. 6--9. In his sixth adventure Alex Rider runs afoul of a group of murderous eco warriors and befriends Paul Drevin, the lonely son of venerated multibillionaire Nikolai Drevin, who isn't what he seems. In fact, neither is Paul, as Alex finds out when he accompanies the father and son on a vacation to the family's luxurious home in Flamingo Bay, which happens to be the launching site of a rocket that will carry the observation module for Drevin's hugely publicized Ark Angel, the first hotel in space. Readers will need to suspend disbelief more than usual this time: Alex's solo trip into space is unquestionably over the top, and there are a few glitches in plotting. What's impossible to resist are the imaginative gadgets and the breakneck action, which Horowitz handles with his usual assurance and skill. Expect very high demand for this. The first title in the series, Stormbreaker (2001), is being released as a movie, and to celebrate the event, the publisher has redesigned the series' book covers to incorporate a snazzy holographic foil. --Stephanie Zvirin Copyright 2006 Booklist

Hospitalized from a gunshot wound, Alex prevents the kidnapping of another teenage patient. While staying at the boy's luxury estate, Alex once again becomes involved in a terrorism plot, the M16, and the CIA; this time, his adventures take him to the Caribbean and into outer space. Although formulaic, this installment is as fast paced and compelling as the previous ones. (c) Copyright 2010. The Horn Book, Inc., a wholly owned subsidiary of Media Source, Inc. No redistribution permitted. All rights reserved.
More book reviews at iDreamBooks.com