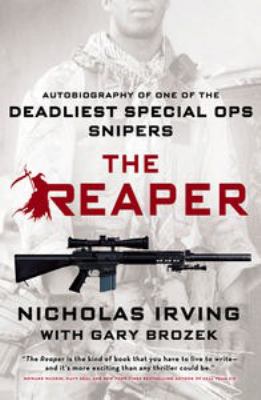 The reaper : autobiography of one of the deadliest special ops snipers / Nicholas Irving, Gary Brozek.

From a place you will not see, comes a sound you will not hear . . .
Groundbreaking, thrilling and revealing, The Reaper tells the incredible true story of the legendary Nicholas Irving, and his journey from wayward Maryland kid to the 3rd Ranger Battalion's deadliest Master Sniper.
From the brotherhood and selflessness of teammates in battle to the cold reality of taking one life to protect another, no other book so dramatically lays bare the experiences of a sniper on point.
'The Reaper is the kind of book that you have to live to write - and it's more exciting than any thriller could be.' Howard Wasdin, Navy Seal and New York Times Bestselling Author of Seal Team Six

This gritty, unapologetic look into the life of a special operations soldier recounts both harrowing and heartfelt tales from the on-the-job experiences of Irving (owner of HardShoot, a training facility for long-range shooting). A former U.S. Army Ranger who amassed a confirmed 33 kills in his six-year military career, the author was given the titular nickname by his teammates after a particularly active deployment, which he chronicles in this easy-to-read book. This account is perhaps not for the faint of heart, but it is sure to be intriguing for those who are made of less squeamish stuff. VERDICT Those who pick up a book about a sniper are probably aware of what they are getting themselves into. While sometimes veering into military shop talk and never really offering much of a glimpse into the emotions and personal reflections that are sure to come with the act of killing, the book should nevertheless be a hit with those interested in military matters and warfare, or anyone curious about this unconventional line of work. Laura Marcus, Odenton, MD (c) Copyright 2014. Library Journals LLC, a wholly owned subsidiary of Media Source, Inc. No redistribution permitted.

Irving, a former Army Ranger, and Brozek, who has cowritten many books, add to the sniper memoir genre a breathless, tension-filled account of the day-to-day combat experiences of a sniper in Afghanistan. A child of a military family, Irving knew he wanted to be a Navy SEAL from a young age and was on his way to reaching that goal when a routine test revealed that he is color blind. A sympathetic Army nurse helped him fudge a vision test, so he became a Ranger instead, honing a natural affinity for sharpshooting. Brozek gives Irving's story shape, heart, and context as he helps convey Irving's mixed emotions about his role in combat. But the real craft is in the book's the artful depictions of battle. Readers are brought into the heat of the fight with white-knuckle anxiety, as troops edge their way toward IED-laden targets, chaotic firefights, and suicide bombers. The story culminates with the takedown of a massive arms depot while Irving was battling a wrenching gastrointestinal infection. It's tough stuff, but Irving is a humble and humane narrator. What could have come across as a shallow exercise in chest-thumping is much more. Hawks and doves alike would do well to spend time with Irving to learn what it's like to be a soldier in today's military. (Jan.) © Copyright PWxyz, LLC. All rights reserved.

Gung-ho account of a sniper's time in Afghanistan, focused on "the thrill, the rush, the smell of gunpowder in combat."Raised in a military family, Irving felt destined for service at a high level, becoming an Army Ranger at age 22. His perspective is unabashedly adolescent, portraying combat like a giant video game and entranced by the rituals and comradeship of men under arms. As with other recent books, Irvingwriting with Brozek (co-author: The Hurt Artist: My Journey From Suicidal Junkie to Ironman, 2014, etc.)is adept at discussing the uncompromising minutiae of weapons, tactics and battle staging, the lifeblood of the elite sniper fraternity. He portrays several action-packed missions during a 2009 deployment to Afghanistan, pursuing suicide-vest makers and other high-value Taliban targets in both rural and urban environments. During one grueling daylong firefight, Irving killed so many Taliban that his awed comrades bestowed upon him the titular nickname. Irving would ultimately claim 33 confirmed kills, evoking jealousy in his fellow snipers, described as having been "itching for some trigger time." Given that the snipers are essentially tasked with shooting any armed military-age males they encounter, this pervasive machismo gives the narrative an unsavory (albeit unsurprising) subtext, especially since Irving rarely considers the larger political narrative of counterterrorism and the Afghanistan War. Despite his enthusiasm, by the end of the deployment, "all I could think of was that I wanted to get the hell out of that country and go home." Though flattered by his formidable reputation as "this little guy' who was on a crazy roll racking up kills," the hostility of Afghan civilians and the injuries suffered by his friends led him "to question why we were putting in so much blood, sweat, and tears in a place where people didn't seem to want our help." A generic addition to the crowded shelf of post-9/11 special-ops memoirs. Copyright Kirkus Reviews, used with permission.
More book reviews at iDreamBooks.com