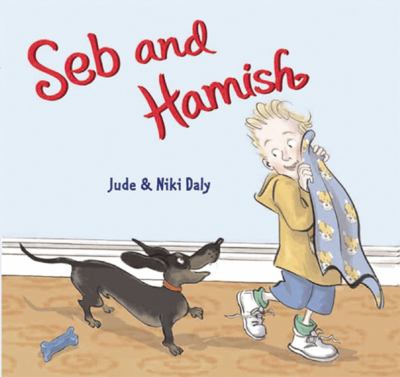 Genre/Form: Picture books for children. | Picture booksDDC classification: 823.92 Summary: When Seb and his mother visit a neighbour with a noisy dog Seb is initially afraid, but soon makes a new best friend.
Tags from this library: No tags from this library for this title. Log in to add tags.
Fiction notes: Click to open in new window
No physical items for this record

Seb and Mama go to visit Mr.s Kenny, but there's a dog called Hamish at the house too. Woof woof, says Hamish. "Home," says Seb in a little voice. While Mama and Mrs. Kenny have tea, Hamish is shut in another room and Seb plays with his train set. He gets so absorbed he forgets all about Hamish - until a piece of his cookie slips under the door. Seb puts his finger through the gap, peeps under the door, and two gentle eyes look back at him. "Hello, Hamish," says Seb. When it's time to go home, Mama looks everywhere for Seb. Where could he be? Seb and Hamish are found at last, curled up together, fast asleep!

When Seb and his mother visit a neighbour with a noisy dog Seb is initially afraid, but soon makes a new best friend.

PreS-K-A young boy overcomes a common childhood fear in this charming picture book. Security blanket in hand, Seb accompanies his mother on a visit to their new neighbor. He is initially frightened by Hamish, Mrs. Kenny's barking dachshund, but once the dog is safely placed in the bedroom and the adults are settling down to tea and cookies, Seb happily starts playing with the toys left for him. Stopping for a snack by the closed bedroom door, he and the now-quiet Hamish peek at each other through the gap between the bottom of the door and the floor. He opens the door to find the dog joyfully wagging his tail, and the two become fast friends. This sweet story is enhanced by Daly's watercolor illustrations, which portray the world from a child's perspective. Seb's fearful reaction to the animal is effectively depicted through the text and illustrations. Equally believable is how he comes to befriend the dog. Readers will like looking for the numerous dachshund references in the pictures. This book will have broad appeal for dog lovers and may encourage fearful children to be brave.-Martha Simpson, Stratford Library Association, CT (c) Copyright 2014. Library Journals LLC, a wholly owned subsidiary of Media Source, Inc. No redistribution permitted.

When Seb and his mother visit their new neighbor in this British import, he isn't sure he wants to get to know her boisterous dog, Hamish. Mrs Kenny greets her visitors with decorated cookies, but even these don't assuage Seb's fear of the barking, exuberant dachshund, Hamish. Mrs Kenny assures him that the dog is simply excited, but she kindly shuts Hamish away to make Seb comfortable. She and Seb's mother visit while Seb entertains himself with a toy train. When he stops for a bite of cookie, a piece falls and rolls under the door to the waiting Hamish. Seb hears the dog sniffing for more and bravely peeks under the crack at the bottom of the door. This leads the toddler to open it just a bit to get a fuller look at Hamish, who calmly waits on his side without pushing door or boy. Seb is emboldened to the point where he goes into the room with Hamish, and soon, Mama and Mrs Kenny discover the two curled up for a nap. While the resolution seems a bit unlikely and quick (why is Hamish suddenly so gentle and calm?), the story addresses a fear that other books neglect in their reiteration of the assumption that all children love animals. The illustrations slyly point up Mrs Kenny's affection for dogs with dachshund-themed decor and affectionately depict the story's events. A fresh take on dog books. (Picture book. 2-5) Copyright Kirkus Reviews, used with permission.
More book reviews at iDreamBooks.com