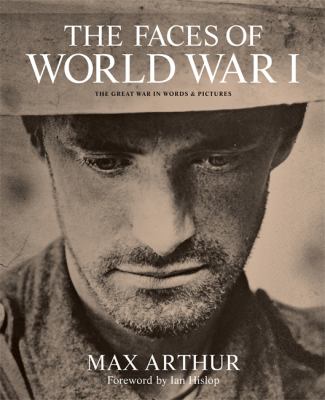 The faces of World War I / Max Arthur ; foreword by Ian Hislop.

Charting the Allies' entry into warfare in 1914, Max Arthur tells the story in words and pictures of the new conscripted army's life through the five years of slaughter and suffering. He brilliantly conveys not only the heroism, but also the universal horror, futility, humour and boredom of warfare. From the front-line troops and the daily dice with death, to the support lines, communications, enlistment, training and propaganda, every aspect of the soldier's life is covered in this brilliant collection of images and interviews, that brings the Great War to life once more.

"The Great War in words and pictures"--Cover.

Originally published: 2007. -Subtitle from jacket: The great war in words & pictures. -Includes index. -Collects photographs and interviews from World War I, depicting the horror, futility, boredom, and humor of the combatants.

Collects photographs and interviews from World War I, depicting the horror, futility, boredom, and humor of the combatants.

Gr 9 Up-In a stunning collection of black-and-white archival photographs of exacting clarity, Arthur depicts the poverty, politics, and patriotic fervor that shaped the war in Europe. No holds are barred as Arthur propels the reader through trenches, field hospitals, and barracks. Excerpts from period letters, diaries, and newspapers give context to the photos. (c) Copyright 2014. Library Journals LLC, a wholly owned subsidiary of Media Source, Inc. No redistribution permitted.
More book reviews at iDreamBooks.com