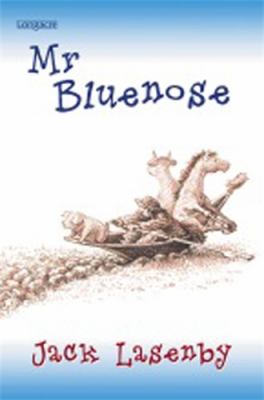 Dad has to go to work, so you go down to see Mr Bluenose; there's always something to do there. He tells you stories while you give him a hand to sort apples, feed the pigs, teach Horse how to push the wheelbarrow, and terrify boys who plan to raid the apple trees. On the way home, you look for empty bottles and sell them for boiled lollies to Mr Bryce at the store. He pays you more boiled lollies for telling him stories about how Mr Bluenose got his name, how he rode a whale to London, and was so seasick for so long in the crow's nest that he ran away from sea to Waharoa and planted his orchard. And then there's always Freddy Jones and the other kids to scare with stories about vampires, moreporks, and the White Woman of Waharoa who has a face as smooth as an egg... Captivating and amusing; a rich, fun-filled summer through a child's eye.

A young girl befriends Mr Bluenose and he in turn tells her some fairly fantastic stories - how he got his name, how he ate a fisherman and various other imaginative tales. Set in Waharoa during the Depression era. Suggested level: intermediate, junior secondary.