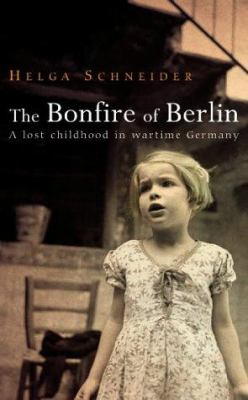 The bonfire of Berlin : translated from the Italian by Shaun Whiteside / Helga Schneider.

Abandoned by her mother, who left to pursue a career as a camp guard at Auschwitz-Birkenau, loathed by her step-mother, cooped up in a cellar, starved, parched, lonely amidst the fetid crush of her neighbours, Helga Schneider endured the horrors of wartime Berlin. The Bonfire of Berlin is her searing account of her survival. The grinding misery of hunger, combined with the terror of air-raids, the absence of fresh water and the constant threat of death and disease - typhus, influenza or simply the apparently petty inflammations of bedbug bites - served not to unite the tenants and neighbours of her apartment block but rather to intensify the minor irritations of communal life into flashpoints of rage and violence.And in the face of Russian victory the survivors could not look forward a return to peacetime but rather to pillage and rape, even in their own cellar, as the victorious Russian soldiers stampeded through the broken city ...