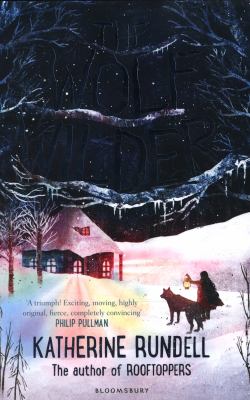 | Russia -- History -- Nicholas II, 1894-1917 -- Juvenile fictionSummary: Feodora and her mother live in the snowbound woods of Russia, in a house full of food and fireplaces. Ten minutes away, in a ruined chapel, lives a pack of wolves. Feodora's mother is a wolf wilder, and Feo is a wolf wilder in training. A wolf wilder is the opposite of an animal tamer: it is a person who teaches tamed animals to fend for themselves, and to fight and to run, and to be wary of humans.
Tags from this library: No tags from this library for this title. Log in to add tags.
Fiction notes: Click to open in new window

Feodora and her mother live in the snowbound woods of Russia, in a house full of food and fireplaces. Ten minutes away, in a ruined chapel, lives a pack of wolves. Feodora's mother is a wolf wilder, and Feo is a wolf wilder in training. A wolf wilder is the opposite of an animal tamer- it is a person who teaches tamed animals to fend for themselves, and to fight and to run, and to be wary of humans.
When the murderous hostility of the Russian Army threatens her very existence, Feo is left with no option but to go on the run. What follows is a story of revolution and adventure, about standing up for the things you love and fighting back. And, of course, wolves.

Feodora and her mother live in the snowbound woods of Russia, in a house full of food and fireplaces. Ten minutes away, in a ruined chapel, lives a pack of wolves. Feodora's mother is a wolf wilder, and Feo is a wolf wilder in training. A wolf wilder is the opposite of an animal tamer: it is a person who teaches tamed animals to fend for themselves, and to fight and to run, and to be wary of humans.

In 20th-century tsarist Russia, aristocrats raise captured wolf pups to perform as dogs, but when the wolves go mad, they send them to a girl named Feo and her mother, Marina, who "untame" them, so they may live in the wintry wild again. General Rakov, ruler of the tsar's Imperial Army, orders Marina to shoot the wolves; when she refuses, he burns their home and takes her prisoner. Feo plans to rescue her mother with the help of her best friends-wolves White, Gray, and Black-and Ilya, a teenage army deserter with "skinny wrists, but a muscly brain" and a passion for ballet. As in her previous novels, Rundell's (Cartwheeling in Thunderstorms) evocative prose offers startling imagery; when Feo, feeling abandoned, realizes she is not alone, "The moments in which the world turns suddenly kind can feel like a punctured lung." Fairy tale and history merge seamlessly; in a land where terror reigns and adults grow numb with fear, a "little wolf girl" outmaneuvers a sadistic general, awes a village, and inspires an army of children to march on St. Petersburg with dreams of justice. Breathtaking. Ages 8-12. Agent: Claire Wilson, Rogers, Coleridge & White. (Aug.) © Copyright PWxyz, LLC. All rights reserved.

Gr 4-6-Feodora "Feo" Petrovich is a "dark and stormy girl" who lives deep in the snow-covered Russian forest with her mother circa 1917. They are wolf wilders, brave souls who help reintroduce wolves into the wild, once the animals have outlived their usefulness as pets and entertainment for the aristocracy. When the deplorably evil General Rakov threatens their livelihood, burns down their home, and arrests Feo's mother, the plucky young girl sets off into the woods with her three lupine companions and a newborn wolf pup. She's soon joined by a runaway soldier from the tsar's Imperial Army who's not much older than Feo herself. Together, the ragtag band of humans and wolves must outrun Rakov and his men, survive brutal winter conditions, and figure out a way to liberate Feo's imprisoned mother. As in her previous two novels, Rooftoppers (2013) and Cartwheeling in Thunderstorms (2014, both S. & S.), Rundell gives readers a fierce young heroine whose strength and independence are as appealing and authentic as her painstakingly concealed vulnerabilities. Though appearing only briefly in an handful of scenes, Feo's mother is a well-drawn, larger-than-life presence in the girl's life; readers will believe that Feo will risk anything to save her. The pacing slows in the middle, as the characters visit a struggling village and recruit other kids to their cause. The ending, though satisfying, comes quickly and stretches credulity just a bit. Rundell's strength is in the beauty of her writing-lyrical sentences that evoke the drama and simplicity of fairy tales and folklore, combined with descriptions of a setting that will have readers shivering along with the frozen characters as they trudge across the unforgiving terrain. VERDICT A solid addition to middle grade collections; hand this novel to kids who appreciate strong characters and harrowing survival stories-Kiera Parrott, School Library Journal © Copyright 2015. Library Journals LLC, a wholly owned subsidiary of Media Source, Inc. No redistribution permitted.

*Starred Review* In the snowy wilderness of Russia, a stormy girl and her mother live in a cabin with only wolves for company, which is exactly how they like it. The two are wolf wilders, who retrain wolves to survive in nature when they fall out of favor with the Russian nobility who kept them as pets. It is a joyous existence for Feo, until insane, violent General Rakov decrees the wild wolves a nuisance and arrests Feo's mother, burning their home in the process. Feo manages to escape into the night, but knows Rakov will be following close behind. With a newborn pup snuggled to her chest, her wolf pack best friends, and a soldier boy defector, Feo strikes out toward St. Petersburg to rescue her mother. Rundell (Cartwheeling in Thunderstorms, 2014) never fails to work magic with language and deft storytelling. Feo's world of wolves and snow, danger and triumphant bravery rings with the classic allure of folktales. Her spirited, half-wild nature shines brightly on the page, even as her vulnerabilities endear her to readers' hearts. It is a wonderful thing to see Feo's quest inspire a nation to stand up and fight, and readers will cheer her on every step of the way.--Smith, Julia Copyright 2015 Booklist

Feodora and her mother, Marina, are wolf wilders in early-twentieth-century Russia: when aristocrats tire of their pet wolves (a status symbol thought to bring good luck), the girl and her mother reverse the wolves forced domestication, teaching the animals how to survive in the wild despite the tsars orders to destroy them. When the tsars Imperial Army, at the command of bloodthirsty General Rakov, arrests Feos mother for treason and burns down their house, Feowith the help of a young soldier, Ilya (who has the heart of a dancer, not a fighter), and her three wolf companionsmakes her way to Saint Petersburg to orchestrate Marinas escape. At first concerned only with herself and her family (human and wolf), prickly Feo has her eyes opened to the suffering of others by teenage revolutionary Alexei, who enlists her little band in fighting back against Rakov and the tsar. There are enough folkloric elements to make the tales more implausible events (its awfully easy for Feo and company to make their way past the guards into the city) feel like part of a grander tapestry: when the children breach the prison, for example, their triumph is transcendent. At the end, Rakov gets his comeuppance in appropriately gory (though offstage) fashion; Ilya finds his footing; and Feo realizes you dont need to keep your teeth bared when youre part of a pack. elissa gershowitz (c) Copyright 2015. The Horn Book, Inc., a wholly owned subsidiary of Media Source, Inc. No redistribution permitted.

A young Russian who has known more wolves in her life than people sets out to rescue her mother from a czarist prison. In a remote area not far from St. Petersburg, 12-year-old Feodora, "a dark and stormy girl," and her strong mother, Marina Petrovich, take wolves that have grown too dangerous for the aristocratic households in which they have been raised from captured cubs and train them to live on their own in the wild. Feo's idyll comes to a sudden end when brutal, sadistic Gen. Mikail Rakov, declaring that wolves are all vermin, descends to burn the cabin and hustle her mother off to Kresty Prison in the city. Off she sets on a seemingly quixotic rescue, with beloved semiferal charges Black, White, and Gray ("a bunch of the most beautiful criminals"), a newly born wolf pup, 13-year-old army deserter Ilya, and growing bands of children and disaffected villagers in her wake. Though historical events up to and including the February Revolution take place in the background, Feo's harrowing journey is the story's focus. Through bitter storms and ambushes, terror and tragedy, an unrelenting sense of purpose lightened with flashes of humor"Black had eaten three toes, which, technically, had belonged to an English lord"carries Feo and her allies to a decisive confrontation with Rakov. Rugged cross-country adventure with a diverse cast of two- and four-legged fellow travelers and a sturdy main character who is more than a little "wilded" herself. (Historical fiction. 10-13) Copyright Kirkus Reviews, used with permission.
More book reviews at iDreamBooks.com