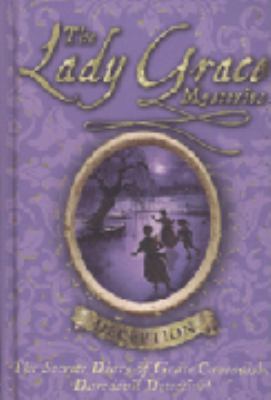 Queen Elizabeth is furious at the delays to the production of her new coin - and so Lady Grace and her fellow Maids of Honour escape her bad temper and set off to skate on the frozen Thames. But their outing turns sour when a body is discovered on the banks - a man blindfolded with coins on his eyes. Grace is sure something odd is going on and decides that as the Queen's Lady Pursuivant, she should be the one to investigate. Along with her friends Ellie the laundrymaid and Masou the acrobat, she delves deep into a dangerous world of counterfeiting and corruption.

Jan Burchett and Sara Vogler are writing as Grace Cavendish.

The river Thames has frozen over, and Lady Grace can't wait to skate down to the Frost Fair. But a gruesome discovery on the ice interrupts the winter revelry. Could the dead body with the coins on its eyes be connected to problems with the Queen's new currency? Lady Grace must unravel the mystery and track down the master forgers before it's too late. Suggested level: intermediate, junior secondary.

The adventures of Lady Grace, a maid of honor to Queen Elizabeth I, continue as a murder leads the self-styled sleuth to the Tower of London and an operation counterfeiting the queen's new coin. The historical period is limned in a lively and colorful fashion, and if the plot is a bit of a stretch, Lady Grace is a plucky and resourceful heroine. (c) Copyright 2010. The Horn Book, Inc., a wholly owned subsidiary of Media Source, Inc. No redistribution permitted. All rights reserved.
More book reviews at iDreamBooks.com