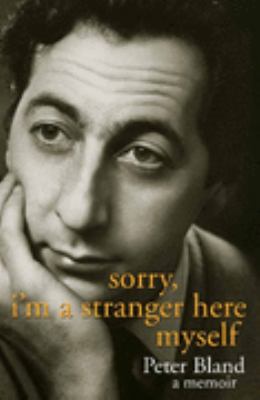 Sorry, I'm a stranger here myself : a memoir / by Peter Bland.

An evocative and intriguing memoir following Peter's boyhood in the UK, experiencing the war years, living with the 'total stranger' who was his father and enduring the premature loss of both parents. It takes him to near destitution before he immigrated to New Zealand, a place that struck him with its barrenness: 'Perhaps the whole thing had been a hoax, an elaborate con designed to fool us into populating an uninhabited land.' There were lonely times ahead for him but he eventually married, moved through a series of jobs, including working for the Listener and being co-founder of the Downstage Theatre. He also began to write poetry and mixed with other writers, including James K Baxter, Louis Johnson, Fleur Adcock, Alistair Campbell and Gordon Challis. And just as he was establishing himself as a New Zealander, as part of the local landscape, he won a scholarship that sent him back to London to study acting: 'A part of me was dwindling with the disappearing coastline. Soon there was nothing but the open ocean and the wake of where we'd been.'The text and poetry in this vivid, honest and revealing memoir provide strong evocations of the UK through the 30s and 40s and New Zealand in the 50s and 60s. It's a testament to a specific time and an irrepressible individual. ABOUT THE AUTHOR: Peter Bland is an Auckland poet with an international reputation. As a broadcaster in the 1960s he edited the national poetry programme and inaugurated New Zealand's first national arts review programme Kaleidoscope. He was co-founder and artistic director of Wellington's Downstage Theatre. He has published several collections of poetry and in 1977 was given a Cholmondeley Award for his poetry by the British Society of Authors and later the Melbourne Festival Literary Award. Peter was born in Yorkshire in 1934 and immigrated to New Zealand in 1954, where he became closely associated with the Wellington group of poets that included his close friends Louis Johnson, James K Baxter and Alistair Campbell. Since the early 1970s he has divided his time between England and New Zealand and travelled widely as an international jobbing actor.He is perhaps best known in New Zealand for his role as Wesley Pennington in the 1985 film Came a Hot Friday, for which he won a GOFTA best film actor award. He is married with three children.