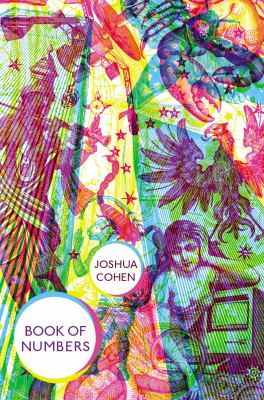 DDC classification: 813/.54 Summary: "Book of numbers is a novel about two men of the same age with the same name: Joshua Cohen. The first Joshua, our narrator, is a writer whose keenly anticipated debut (a non-fiction chronicle of his mother's survival of WW11) has the bad luck to be published on the September 11, 2001, and within a decade his career fizzled into a series of freelance book reviews, for-hire product endorsements, and other varieties of literary hack-work. The other Joshua is the enigmatic billionaire Founder and CEO of Tetration, the world's most vital and most profitable tech company, which started by revolutionising the search engine and later ventured into smartphones, computer manufacturing, and global surveillance" --backcover.
Tags from this library: No tags from this library for this title. Log in to add tags.
Total holds: 0

<p> A monumental, uproarious, and exuberant novel about the searchâe"for love, truth, and the meaning of Life With The Internet </p> <p> Limited First Edition comes with exclusive fold-out jacket poster </p> <p>The enigmatic billionaire founder of Tetration, the worldâe(tm)s most powerful tech company, hires a failed novelist, Josh Cohen, to ghostwrite his memoirs. The mogul, known as Principal, brings Josh behind the digital veil, tracing the rise of Tetration, which started in the earliest days of the Internet by revolutionizing the search engine before venturing into smartphones, computers, and the surveillance of global citizens. Principal takes Josh on a mind-bending world tour from Palo Alto to Dubai and beyond, initiating him into the secret pretext of the autobiography project and the life-or-death stakes that surround its publication.</p> <p>Insider tech exposÃ©, leaked memoir-in-progress, international thriller, family drama, sex comedy, and biblical allegory, Book of Numbers renders the full range of modern experience both online and off. Embodying the Internet in its language, it finds the humanity underlying the virtual.</p> <p>Featuring one of the most unforgettable characters in contemporary fiction, Book of Numbers is an epic of the digital age, a triumph of a new generation of writers, and one of those rare books that renew the idea of what a novel can do.</p> <p>Please note that Book of Numbers uses a special pagination system inspired by binary notation: the section number precedes the page number, and is separated from it by a decimal point.</p>

"Book of numbers is a novel about two men of the same age with the same name: Joshua Cohen. The first Joshua, our narrator, is a writer whose keenly anticipated debut (a non-fiction chronicle of his mother's survival of WW11) has the bad luck to be published on the September 11, 2001, and within a decade his career fizzled into a series of freelance book reviews, for-hire product endorsements, and other varieties of literary hack-work. The other Joshua is the enigmatic billionaire Founder and CEO of Tetration, the world's most vital and most profitable tech company, which started by revolutionising the search engine and later ventured into smartphones, computer manufacturing, and global surveillance" --backcover.

Language is paramount in Cohen's work. His last novel, Witz, was a linguistically dexterous work spanning more than 800 pages. Two-page sentences spiked with shards of scattered verses invited the reader into the deep psyche of his characters. Here, the author pens a syntactically enticing narrative of technology. The main character, Joshua Cohen, is an unsuccessful novelist who makes a living as a ghostwriter. He has written everything from PhD dissertations to conference presentations for academics. However, when he is contacted by the CEO of Tetration, one of the world's most successful tech firms, to ghostwrite his memoir, Cohen's life transforms from the mundane to the electrifying. What starts as just another freelance job ends in an investigation of the technologies that mediate our collective fears and desires. Delving deep into the semantic web of our networked lives, Cohen pushes the reader into the wasteland of our abbreviated vocabulary, one SQL (structured query language) at a time. VERDICT Much like Cohen's previous work, this densely packed narrative will appeal to readers with an appreciation for experimental fiction and the ever-expanding limits of language.-Joshua Finnell, Denison Univ. Lib., Granville, OH © Copyright 2015. Library Journals LLC, a wholly owned subsidiary of Media Source, Inc. No redistribution permitted.

Like Pynchon's Bleeding Edge and Eggers's The Circle, Cohen's (Witz) latest is an ambitious and inspired attempt at the Great American Internet Novel. The narrator, Joshua Cohen, is a struggling writer whose debut effort was inauspiciously launched on Sept. 10, 2001. Deciding to "earn better money... at the expense of identity," he agrees to ghostwrite the memoir of another Joshua Cohen, referred to as "Principal." Principal is the secretive founder of Tetration, a tech company that has developed a revolutionary search engine and seeks to "equalize ourselves with data and data with ourselves." Speaking to his ghostwriter in the first-person plural he leisurely relates the genesis and evolution of Tetration while sprinkling in a mixture of ominous epigrams ("All who read us are read,"), mystical musings, and "techsperanto," the language of Silicon Valley. But Principal has another motive in sharing his story, one which forces his biographer to go into hiding, and offline, to complete his task. The novel maps the recent history of the Internet onto one of Western culture's oldest stories, the plague-filled wanderings of Moses and his fractious band of Israelites journeying toward the Promised Land. This allegorical element imposes just enough order on a saga as sprawling and unruly as the Web. A dense, thrilling, and occasionally perplexing work, Cohen's encyclopedic epic is about many things-language, art, divinity, narrative, desire, global politics, surveillance, consumerism, genealogy-but it is above all a standout novel about the Internet, humanity's "first mutual culture," in which our identities are increasingly defined by a series of ones and zeroes. (June) © Copyright PWxyz, LLC. All rights reserved.

A writer's effort to prepare a biography of a Google-like company's founder sits at the core of this smart, choppy novel that's trying to take on technology, creativity, and much else. In a couple hundred pages fewer than 2010's mammoth Witz, Cohen (Four New Messages, 2012, etc.) presents a writer named Joshua Cohen whose last novel fared poorly because it came out on Sept. 11, 2001. Ten years later, the fictional writer is offered the job of writing "the memoir of the Joshua Cohen I'm always mistaken for," the "genius googolionaire" creator of the Internet-search firm Tetration.com. Long stretches rich in high-tech lingo entail the Web genius describing his growing up, how the company got going, and how success affected the initial team, particularly the enigmatic Moe, who made searching profitable and then disappeared. The villainwhose complicity with the government raises echoes of Edward Snowden and Julian Assangeis the unsubtly named Tetration president, Kori Dienerowitz (with the likely laugh that the real writer may have made little dinero on Witz). The first fictional Cohen's rocky marriage allows for fun pokes at bad blogs (his wife's) and sloppy emails (her boyfriend's). The real Cohen riffs impressively on countless Web-related matters, from chaos to code to venture capital to Y2K and the woes of single-minded work: "we had ringworm, shingles, scabies, and mule lymphangitiscircadian rhythm disorder, tendonitis." The corollary for common readers could be frustration at the flood of tech terms, shorthand, and slang. It's comparable on both counts to William Gaddis' comic dissection of postwar finance in JR. Like Gaddis, Cohen also recognizes the laughs and peril at this technologically challenging stage of the human comedy and its new questions about what people are searching for, how the results may affect them, and what it all may cost. Copyright Kirkus Reviews, used with permission.
More book reviews at iDreamBooks.com