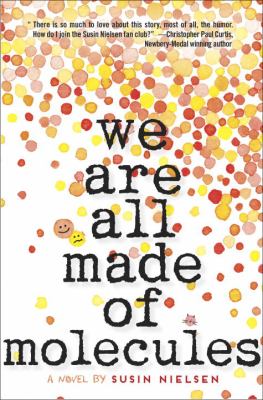 We are all made of molecules / Susin Nielsen.

DDC classification: [Fic] Summary: Thirteen-year-old brilliant but socially-challenged Stewart and mean-girl Ashley must find common ground when, two years after Stewart's mother died, his father moves in with his new girlfriend--Ashley's mother, whose gay ex-husband lives in their guest house.
List(s) this item appears in: 9. Your Best Reads of 2017
Tags from this library: No tags from this library for this title. Log in to add tags.
Fiction notes: Click to open in new window
Total holds: 0

*" This savvy, insightful take on the modern family makes for nearly nonstop laughs." --Kirkus Reviews, Starred<br> <br> Stewart, 13: Socially clueless genius.<br> Ashley, 14: Popular with everyone but her teachers<br> <br> Ashley's and Stewart's worlds collide when Stewart and his dad move in with Ashley and her mom. The Brady Bunch it isn't. Stewart is trying to be 89.9 percent happy about it--he's always wanted a sister. But Ashley is 110 percent horrified. She already has to hide the real reason her dad moved out; "Spewart" could further threaten her position at the top of the social ladder.<br> <br> They're complete opposites, but they have one thing in common: they--like everyone else--are made of molecules.<br> <br> In this hilarious and deeply moving story, award-winning author Susin Nielsen has created two narrators who will steal your heart and make you laugh out loud.<br> <br> Praise <br> NCSS-CBC Notable Social Studies Trade Books for Young People<br> Nominated for the George Peach Book Award for Teen Readers<br> Nominated to the Pacific Northwest Young Reader's Choice Award<br> Texas Lone Star Reading List<br> <br> <br> "A laugh-out-loud story of two teens learning to adjust to unusual family life that neither expected...Everyone from teenagers to adults will enjoy this story of ups and downs, laughter and tears, and the healing power of love."-- VOYA <br> <br> *"Drama, humour, poignancy, and suspense are rarely found in such perfect proportions..some truly funny writing...stellar, top notch stuff." --Quill & Quire, Starred<br> <br> What Other Authors Are Saying <br> "Susin Nielsen is one of the best writers working today. In We Are All Made of Molecules, her astonishing ability to combine insight, tenderness, poignancy, and uproarious humor is in full flower. Susin Nielsen is a genius, and kids and adults alike will adore this book." --Susan Juby, author of The Truth Commission <br> <br> "What a skilled, gifted writer Susin is!...There's so much to love about this story . . . but what grabbed me the most is the humor." --Christopher Paul Curtis, Newbery Medal-winning author of Bud, Not Buddy and The Watsons Go to Birmingham--1963

Thirteen-year-old brilliant but socially-challenged Stewart and mean-girl Ashley must find common ground when, two years after Stewart's mother died, his father moves in with his new girlfriend--Ashley's mother, whose gay ex-husband lives in their guest house.

In this honest and funny portrayal of the difficult transitions that can come with blending families, 13-year-old Stewart is on board when his father decides they are moving in with his girlfriend, Caroline, and her daughter, Ashley. Socially awkward and cerebral, Stewart knows that it's time to move on after his mother's death and is excited to be gaining a sister. Fourteen-year-old Ashley feels otherwise ("My family is fubar" is her introduction to readers). Alternating between the teens' perspectives, Nielsen (The Reluctant Journal of Henry K. Larsen) humorously conveys Stewart's attempts to befriend Ashley, whose anger is actually about her father, who recently announced that he's gay and moved into the cottage in their yard. Stewart's analytical perspective and Ashley's sarcastic narration are as different as they are entertaining, though Nielsen perhaps has a bit too much fun at the expense of Ashley, who is prone to malapropisms ("Claudia hit the snail on the head") and thinks Idi Amin is one of her mother's colleagues. But both characters grow tremendously as they grapple with loss, navigate their differences, and find common ground. Ages 12-up. Agent: Hilary McMahon, Westwood Creative Artists. (May) © Copyright PWxyz, LLC. All rights reserved.

Gr 7-10-Thirteen-year-old Stewart and 14-year-old Ashley could not be more different. Stewart is a quirky, gifted intellectual who is coping with the loss of his mother, while Ashley is a popular fashionista still reeling from her parents' divorce-brought about by her father's announcement that he is gay. When a serious relationship develops between Stewart's father and Ashley's mother, the two teens find themselves living under the same roof. By turns humorous and heartbreaking, the story is told in alternating chapters narrated by both protagonists. In comparison to Stewart, Ashley is somewhat underdeveloped, but the contrast between the two characters makes for a compelling read, particularly as they begin to challenge and influence each other. Their overlapping journeys will leave readers with much to think about, as Nielsen unflinchingly tackles issues such as bullying, bigotry, and tolerance; the true nature of friendship; and what it means to be a family. The book will appeal to fans of R.J. Palacio's Wonder (Random, 2012) and Jo Knowles's See You at Harry's (Candlewick, 2012). VERDICT This work of realistic fiction should find a place in most libraries serving teens.-Lauren Strohecker, McKinley Elementary School, Abington School District, PA (c) Copyright 2015. Library Journals LLC, a wholly owned subsidiary of Media Source, Inc. No redistribution permitted.

When 13-year-old Stewart's father moves in with Ashley's mother, there are naturally some hurdles to be faced. However, Stewart seems to be much more excited at the prospect of having a sister than Ashley is about the new freakazoid in her life. Stewart has trouble adapting to his new school, a real change from his private academy for gifted learners. Finding friends is tough, but even tougher are the bullies, especially the guys in Stewart's gym class who seem determined to embarrass him. Stewart and Ashley narrate their stories in alternating chapters, a technique that highlights the very different perspective each brings to the story. For example, while Ashley is absolutely dazzled by Jared, Stewart knows that Jared's interest extends only to conquest. Ashley, meanwhile, tends to see only how the actions of others are an inconvenience for her. Sexuality, sexual orientation, and sexual development all play a role. Nielsen employs humor to ease tension, and despite the heavy topics, Ashley's malapropisms will cause some grins.--Lesesne, Teri Copyright 2015 Booklist

Snotty rich girl Ashley isn't happy that nerdy Stewart and his dad (who's dating her mom) are moving in. Life briefly looks up for Ashley when she starts dating popular Jared, but Stewart discovers she might need to be saved from Jared, an aggressive and homophobic bully. The well-drawn characters learn important skills and lessons in this candid look at a modern family. (c) Copyright 2015. The Horn Book, Inc., a wholly owned subsidiary of Media Source, Inc. No redistribution permitted.

A nerdy boy and a queen-bee girl become stepbrother and -sister in this comedy/drama. Hilarity ensues when 13-year-old Stewart learns that he and his dad are moving in with Caroline and her 14-year-old daughter, Ashley. Stewart copes well enough, thanks to his outstanding intelligence, precocious emotional maturity, math skills, and the calm outlook with which he assesses his successes and failures. He's excited to have a sister. Ashley, on the other hand, couldn't care less about school and wants nothing to do with her new almost-stepbrotherwho, to her mortification, has been bumped up a year and is now in her class. She's also terrified that people will learn her estranged dad is gay. Ashley scores big when she lands the handsome Jared as a boyfriend, but Stewart knows Jared is a bully because he's trapped in physical education class with him. The psychodrama is narrated by the two kids in alternating chapters, leavened with constant, wry humor that should keep readers chuckling even as the story grapples with serious emotional issues. Stewart comes across as absolutely adorable. He knows he's a complete geek with imperfect social skills. His disarming honesty about his intelligence and especially about his weaknesses holds the entire book together, allowing readers to take self-absorbed Ashley with a grain of salt as she goes through what her mother terms the "demon seed" stage. This savvy, insightful take on the modern family makes for nearly nonstop laughs. (Fiction. 12-18) Copyright Kirkus Reviews, used with permission.
More book reviews at iDreamBooks.com