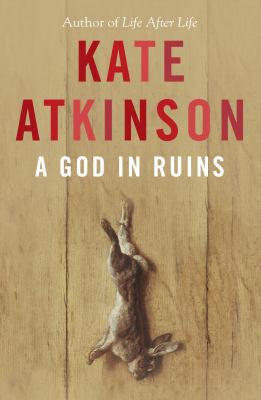 A god in ruins / Kate Atkinson.

| Great Britain -- History -- 20th century -- FictionGenre/Form: Historical fiction.DDC classification: 823/.914 Summary: Kate Atkinson's dazzling Life After Life, the bestselling adult book this year to date in the UK, explored the possibility of infinite chances, as Ursula Todd lived through the turbulent events of the last century again and again. In A God in Ruins, Atkinson turns her focus on Ursula's beloved younger brother Teddy - would-be poet, RAF bomber pilot, husband and father - as he navigates the perils and progress of the 20th century. For all Teddy endures in battle, his greatest challenge will be to face living in a future he never expected to have. A God in Ruins is a masterful companion to Life After Life, and will prove once again that Kate Atkinson is one of the finest novelists of our age.
Tags from this library: No tags from this library for this title. Log in to add tags.
Fiction notes: Click to open in new window

SHORTLISTED FOR THE 2015 COSTA NOVEL AWARD

A God in Ruins relates the life of Teddy Todd âe" would-be poet, heroic World War II bomber pilot, husband, father, and grandfather âe" as he navigates the perils and progress of the 20th century. For all Teddy endures in battle, his greatest challenge will be to face living in a future he never expected to have.

This gripping, often deliriously funny yet emotionally devastating book looks at war âe" that great fall of Man from grace âe" and the effect it has, not only on those who live through it, but on the lives of the subsequent generations. It is also about the infinite magic of fiction. Those who loved the bestselling Life After Life will recognise Teddy as Ursula Toddâe(tm)s adored younger brother âe" but for those who have not read it, A God in Ruins stands fully on its own.

Few will dispute that it proves once again that Kate Atkinson is one of the most exceptional novelists of our age.

Companion to: Life after life.

Kate Atkinson's dazzling Life After Life, the bestselling adult book this year to date in the UK, explored the possibility of infinite chances, as Ursula Todd lived through the turbulent events of the last century again and again. In A God in Ruins, Atkinson turns her focus on Ursula's beloved younger brother Teddy - would-be poet, RAF bomber pilot, husband and father - as he navigates the perils and progress of the 20th century. For all Teddy endures in battle, his greatest challenge will be to face living in a future he never expected to have. A God in Ruins is a masterful companion to Life After Life, and will prove once again that Kate Atkinson is one of the finest novelists of our age.

The best novels reward readers at every level of engagement, from the casual listener seeking an engrossing audiobook with great characters to others in pursuit of a more intellectual study of structure and craft. Atkinson's latest, a companion to Life After Life, succeeds on all levels. While the two books speak to each other in ways that will entertain fans of both, A God in Ruins, the story of Teddy Todd, an RAF pilot in World War II, stands on its own. The novel presents an epic, kaleidoscopic view of Teddy and his family over the course of nearly a century. A single event is often recalled in several different ways, both from the point of view of different characters and through Teddy's subtly differing perspectives on a single event from the vantage point of multiple stages in his life. The result is a profoundly moving meditation on memory, perception, and time. Atkinson is a master of detail and character, and plot points are revealed skillfully and with purpose. The controversial ending delivers a gut punch that should remind readers what's at stake in war, in real life, and in fiction. Alex Jennings's subtle, affecting performance does Atkinson's powerful novel perfect justice. Verdict A must-listen! A God in Ruins gives fiction lovers reason to proclaim that the demise of the novel has been greatly exaggerated. ["Beautifully written but emotionally withheld; there's more to disappointed lives then just disappointment": LJ 5/15/15 review of the Little, Brown hc.]-Heather Malcolm, Bow, WA © Copyright 2015. Library Journals LLC, a wholly owned subsidiary of Media Source, Inc. No redistribution permitted.

The life expectancy of RAF pilots in World War II was notoriously short, with fewer than half surviving the war. But Teddy Todd-the beloved younger brother of Ursula Todd, whose life in all its variations was the subject of Atkinson's Life After Life-beats the odds. Inner peace means resuming a life he never expected to have in a now-diminished England. He has nightmares; a wife he loves, although not necessarily enough or in the right way; and, eventually, a daughter who blames him for her mother's early death and never misses a chance to mention the blood on his hands. As much postwar story as war story, the book is also a depiction of the way past and present mix. Atkinson fans know that she can bend time to her will, and here she effortlessly shifts between Teddy's flying days and his middle and old age, between his grandchildren and their awful mother, and back again. And, as in Life After Life, Atkinson isn't just telling a story: she's deconstructing, taking apart the notion of how we believe stories are told. Using narrative tricks that range from the subtlest sleight of hand to direct address, she makes us feel the power of storytelling not as an intellectual conceit, but as a punch in the gut. (May) © Copyright PWxyz, LLC. All rights reserved.

*Starred Review* Atkinson calls her latest novel a companion piece to her previous book, Life after Life (2013), which vividly depicted the multiple lives led by Ursula Todd during WWII. This one follows her much-loved younger brother, Teddy. He only leads one life as a husband, father, grandfather, RAF pilot, teacher, and writer, but the ever-inventive Atkinson encompasses many phases of Ted's life within one chapter. At one moment, we are up in the air with him during one of his harrowing bombing raids (The dead are legion), and the next, we are at Teddy's nursing home, where he resides while in his nineties, witnessing his tenderhearted granddaughter reading to him from his favorite Trollope novel, though he can barely hear. Atkinson often revisits the same scene from a different perspective, adding key details, and always, there is her wry humor. She also continues to write, as she did in Life after Life, about the savagery of war in clarion prose that is graphic in detail and possessed of a singular melancholy. And whether it is the stoic Teddy, his practical wife, his unbelievably selfish daughter, or his neglected grandchildren, every one of Atkinson's characters will, at one moment or another, break readers' hearts. Atkinson mixes character, theme, and plot into a rich mix, one that will hold readers in thrall. HIGH-DEMAND BACKSTORY: Atkinson's legion of fans, both of her Jackson Brodie mysteries and Life after Life, will be eagerly anticipating her latest, which has a 150,000 first printing and will be backed by numerous promotional efforts, including book-club outreach.--Wilkinson, Joanne Copyright 2015 Booklist

Fresh from the excellent Life After Life (2013), Atkinson takes another sidelong look at the natures of time and reality in this imaginative novel, her ninth.Transpose Ambrose Bierce's "An Occurrence at Owl Creek Bridge" to the skies over Europe in World War II, and you'll have some idea of the territory in which Atkinson is working. Ursula Todd, the protagonist of Life After Life, returns, appearing from time to time at just the right moments, in the manner of a chorus. The lead in this story, though, is her brother Teddy, who, having survived both childhood and the air war, is now disillusioned"The whole edifice of civilization turned out to be constructed from an unstable mix of quicksand and imagination"and suffering from more than a little guilt that he lives while so many others do not. If Bierce might be a silent presence in the proceedings, so too might be The Best Years of Our Lives, which treats just that issuesave that we know how things turned out for the players in William Wyler's 1946 film, whereas Atkinson constantly keeps us guessing, the story looping over itself in time ("This was when people still believed in the dependable nature of timea past, a present, a futurethe tenses that Western civilization was constructed on") and presenting numerous possibilities for how Teddy's life might unfold depending on the choices he makes, to say nothing of things well beyond his control. Atkinson's narrative is without some of the showy pyrotechnics of its predecessor. Instead, it quietly, sometimes dolefully looks in on the players as, shell-shocked by a war that has dislocated whole generations and nations, they go about trying to refashion their lives and, of course, regretting things done, not done, and undone as they do. But do we really have just one life, as Ursula insists? It's a point worth pondering. A grown-up, elegant fairy tale, at least of a kind, with a humane vision of people in all their complicated splendor. Copyright Kirkus Reviews, used with permission.
More book reviews at iDreamBooks.com