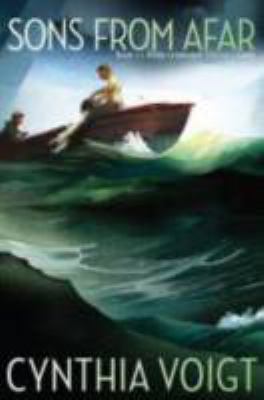 DDC classification: 813.54 Summary: Six years after coming to live with their grandmother, James and Sammy Tillerman go in search of their long-lost father.
Tags from this library: No tags from this library for this title. Log in to add tags.
Fiction notes: Click to open in new window

Will a common cause unite two brothers--or drive them further apart? Find out in the sixth installment of Cynthia Voigt's Tillerman cycle.

If James and Sammy Tillerman agree on anything, it's that they have nothing in common. Sammy is a tough jock, while James is an intellectual who has begun to question his identity. Then James enlists his brother's help to find Francis Verricker, who may be the father who deserted them long ago. Through this quest, the brothers learn more about themselves than they thought possible.
Cynthia Voigt writes realistically of human failure--and triumph--in this poignant novel from her acclaimed Tillerman cycle.

Six years after coming to live with their grandmother, James and Sammy Tillerman go in search of their long-lost father.

This installment of the Tillerman saga (begun in Homecoming) focuses on the Tillerman brothers' search for the father who abandoned them; PW said the work "rings with truth and compassion." Ages 12-up. (Sept.) (c) Copyright PWxyz, LLC. All rights reserved

Gr 6-8 In this continuation of the Tillerman saga, the focus is on brothers James and Sammy. Always the questioner, James is determined to find the father he never knew. His main objective is to see if his own character traits, especially his intelligence, which sets him apart, are inherited from this shadowy figure from the past. Reluctantly, Sammy joins in on the search, which is made more difficult because they do not confide in Gram, nor older sister Dicey, who is away at college. Readers are drawn into the hunt, hoping that the merchant seaman father is found, yet fearing what kind of man he will turn out to be. (Those familiar with Voigt's Runner Atheneum, 1985 already have an idea.) Voigt is wise to make the search inconclusive; it ends at a waterfront bar in a fight with ex-associates of their father. Yet the story itself comes to a conclusion, for James has found himself and has at least become more comfortable with his unique qualities. The theme of fatherhood is woven throughout the narrative, including Greek myths and the fathers of friends. And while the search is the main element in this story, Voigt allows her characters to pursue other interests along the way. Readers who are not familiar with the earlier Tillerman novels, such as Homecoming (1981) and Dicey's Song (1982, both Atheneum), will have no problem finding their place in this story, as Voigt fills in enough of the background to cover any questions. However, they will no doubt be motivated to go back to the earlier episodes to become further acquainted with these characters who have remained marvelously consistent under Voigt's hand. Just as James' search drives him to the conclusion, so will readers be compelled to stay with his story from start to finish. Susan Schuller, Milwaukee Public Library (c) Copyright 2010. Library Journals LLC, a wholly owned subsidiary of Media Source, Inc. No redistribution permitted.

Gr. 6-10. Dicey's brothers, James and Sammy, are at the heart of this continuation of the Tillerman family saga. Six years have passed since Dicey's Song (Booklist 79:49 S 1 82), when Dicey brought her siblings to their grandmother's house: now Dicey is away at college, James is in high school, and Sammy is twelve. The story's central element concerns James' wish to find the father the children have never known. He enlists Sammy's help, and the two begin investigating who their father was and where he might be. None of the things they discover is good; from all accounts their father was a smart but completely irresponsible individual who made many enemies along the way. After traveling to Annapolis and becoming the center of a chilling barroom brawl, the boys return home wiser and somewhat at peace with the fact that they will probably never see their father. As usual, Voigt fleshes out her story line with extensive characterizations. James and Sammy are cast as two drastically different personalities who are sometimes at odds with each other but who are nevertheless inextricably bound. Sammy is the action-oriented doer, and James is the thinker; each carries respect for the other and a measure of self-loathing for himself. Voigt paints in discreet details that enhance settings and textures of personalities; her cast is lifelike even secondary figures are distinctive and memorable. She plays with ideas as well; James' scholarly musings over school assignments are a springboard for some quiet analogies that extend into the story's development. This thoroughly realized story needs a thoughtful reader who isn't in a hurry. Its savory substance will linger on, especially for readers of Voigt's other Tillerman books. DMW. Fathers Fiction / Brothers Fiction [OCLC] 87-1857

Continuing the story of the Tillermans of Crisfield, Md. (Dicey's Song--Newbery Medal, 1983--plus four other books, more or less related), Voigt chronicles the spring Dicey's two brothers seek news of their father. James, 15, a thinker who does so well in school that he dismisses himself as a dork, is the one who wants to know; Sammy, a doer, is willing to help, although as a seventh grader with no self-image problems he doesn't see the point. They know nothing of their father except that he never married their mother, leaving her to cope alone with four children. Frank Verriker's trail leads them to his third-grade teacher, who adored him in spite of his mischief; a high-school principal who expelled him; a seedy Baltimore dockside bar where the name Verriker evokes such anger that they escape the ensuing brawl only after both are injured. Meanwhile, James has listened to Sammy's advice to just be himself, and Sammy has become the one more deeply involved in the quest for a father--or his own identity. In the end, each realizes that ""people never exactly duplicate[d] one another."" Though they recognize and fear in themselves the qualities of their charming, conscienceless con-man father, they are not doomed to repeat them as faults, and may even share them as virtues. Close friends of the Tillermans--and there are many--will be engrossed even in the slow-moving and introspective parts of this long story. At the climax, there's enough action to reward the patient. And at the conclusion, it's clear that though James' and Sammy's search for a father to follow was always bound to fail, each has in the other a close friend and advisor with complementary talents. It's also clear that Voigt has, with her usual careful crafting, built toward this moment with every line of a complex novel. Copyright ©Kirkus Reviews, used with permission.
More book reviews at iDreamBooks.com