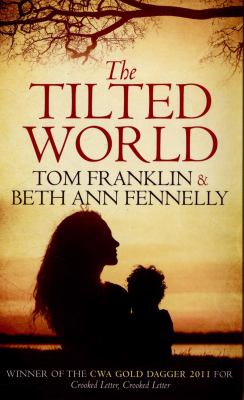 Summary: April, 1927: After months of rain, the Mississippi River has reached dangerous levels and the little town of Hobnob is under threat. Residents fear the levee will either explode under the pressure of the water or be blown by saboteurs from New Orleans, who wish to save their own city. But when an orphaned baby is found, the lives of Ingersoll, a blues-playing prohibition agent, and Dixie Clay, a bootlegger who is guarding a terrible secret, collide. Little can they imagine how events are about to change them - and the great South - forever. For in the dead of night, after thick, illusory fog, the levee will break...
Tags from this library: No tags from this library for this title. Log in to add tags.
Total holds: 0

April, 1927: After months of rain, the Mississippi River has reached dangerous levels and the little town of Hobnob is under threat. Residents fear the levee will either explode under the pressure of the water or be blown by saboteurs from New Orleans, who wish to save their own city. But when an orphaned baby is found, the lives of Ingersoll, a blues-playing prohibition agent, and Dixie Clay, a bootlegger who is guarding a terrible secret, collide. Little can they imagine how events are about to change them - and the great South - forever. For in the dead of night, after thick, illusory fog, the levee will break...

Franklin (Crooked Letter, Crooked Letter) is enamored of the people and history of the South. Poet Fennelly (Great with Child) finds inspiration in the secret anxieties and joys of parenthood. Together, the husband-and-wife team created Dixie Clay, a young woman who is married to bootlegger Jesse and struggling to find closure after the loss of her child. Dixie resides in the town of Hobnob, MS, a town buttressed from massive flooding by a straining levee. The year is 1927, when two prohibition agents mysteriously disappear from the town and federal agents Ingersoll and Ham are sent to investigate. Disguised as engineers, the agents work undercover to integrate themselves into the underbelly of Hobnob and quickly identify Dixie's husband as the main suspect. While Ham pursues Jesse through the law, Ingersoll pursues Dixie romantically. As the water pours through the levee, all four find themselves searching for new beginnings. VERDICT A pleasurable work of historical fiction rife with religious symbolism and romance. [See Prepub Alert, 4/22/13.]-Joshua Finnell, Denison Univ. Lib., Granville, OH (c) Copyright 2013. Library Journals LLC, a wholly owned subsidiary of Media Source, Inc. No redistribution permitted.

Rough South writer Franklin (Crooked Letter, Crooked Letter) and the poet and nonfiction writer Fennelly (Great with Child), distill in this prohibition-era tale of bootleggers and revenuers an atmospheric draught of prose that is at once poetic and gritty. It's 1927 Mississippi, and Commerce Secretary Herbert Hoover has sent two unbribable federal revenue agents, Ted Ingersoll and Ham Johnson, into the maw of the Great Flood to investigate the disappearance of two other "prohis" from Hobnob Landing. On the way, Ingersoll and Ham find a baby, the lone survivor of a country-store looting gone bad. Ingersoll, an orphan himself, gives the boy to bootlegger Dixie Clay, a 22-year-old bereft of her own child. Along with her violent husband Jesse Holliver, Dixie might have been the last person to see the missing revenuers alive. Love for Dixie rises in Ingersoll's heart like the waters on the levee, and he knows that "to fix things... would require broken vows and broken laws, blood, desertion, and money." There's a bit of corn in this mash, but fans of Fennelly will savor her depictions of a mother's ferocious love, and Franklin's following will shine to the violent rendering of a nearly forgotten time and ethos. (Oct.) (c) Copyright PWxyz, LLC. All rights reserved.

*Starred Review* Husband-and-wife authors Franklin and Fennelly join forces for a suspenseful, emotionally moving novel about the Great Flood of 1927 that resurrects this nearly forgotten natural disaster and showcases both their talents. Sent to the Mississippi Delta to solve the disappearance of two fellow Prohibition agents, Ted Ingersoll and his partner come upon a botched robbery that left a baby boy the only survivor. When he arrives at his destination of Hobnob Landing, Ingersoll deposits the child with Dixie Clay Holliver, a sad young woman whose son had died two years before. Ingersoll's attraction to Dixie Clay is dangerous; he doesn't realize she's the secret creator of Black Lightning, the region's finest moonshine, or that she and her shifty husband were the last to see the missing men. Meanwhile, floodwaters continue to rise, the levees are barely holding, and financially motivated saboteurs are itching to strike. The pacing amplifies to mirror the increasing tension. The authors superbly depict the bonds of maternal, romantic, and brotherly love, and their slangy dialogue and piquant metaphors enrich their setting. This is a full-bodied shot of bluesy Americana with just the right amounts of grit, heart, and woeful longing, and it goes down smooth and satisfying.--Johnson, Sarah Copyright 2010 Booklist

The world that's tilting refers to the Mississippi Delta in April 1927, site of one of the greatest natural catastrophes in American history. Although the Great Flood of 1927 provides the background for the narrative, Franklin and Fennelly focus on an unusual, and perhaps implausible, love story. Revenuers Ham Johnson and Ted Ingersoll are sent to Mississippi not only to track down the makers of some of the finest moonshine in the South, but also to solve the mystery of who was responsible for the recent deaths of two other revenuers. Along the way, they find an orphaned baby, and they don't quite know what to do with this unforeseen state of affairs, but Ted had been an orphan himself and so takes pity on the newborn. When he asks around the town of Hobnob Landing, he finds out about Dixie Clay Holliver, a young mother who had recently lost a child to scarlet fever, so he shows up to give her the orphaned infant, whom she names Willy. It turns out Dixie Clay is married to one of the biggest moonshiners in the state, the egregious Jesse Holliver, a womanizing, self-centered and viciously ambitious man. Because Dixie Clay has shown great business acumen, she's taken over her husband's moonshining operation, as Jesse has other irons in the fire. A romance develops between Ted and Dixie Clay, abetted in part by Jesse's abusiveness toward his wife and his indifference to the child. Jesse begins to prepare for a new life, one that involves his blowing up a levee with dynamite and drowning the town, the townspeople, Ted, and even his wife and child. Originally conceived as a short story, the book shows signs of attenuation in its expansion to novel length.]] Copyright Kirkus Reviews, used with permission.
More book reviews at iDreamBooks.com